[Peter Brimelow writes: The legendary John Tanton, founder of FAIR and driving force behind the Social Contract Magazine, has shanghaied a number of immigration reform stalwarts into contributing chapters to a new fact-packed book, Common Sense On Mass Immigration, conveniently timed for this year's election. Besides being available online, it can be ordered in tree form by clicking here.

Rereading my contribution, Mass Immigration And Education, which we post in VDARE.COM hyperlinked form below, I think I should have emphasized how much of this impact is unnecessary—Americans are stuck with educating more than a million children of illegal immigrants because of Plyler vs. Doe, yet another absurd Supreme Court decision, which Congress could easily overturn. VDARE.COM's Edwin S. Rubenstein is working on quantifying this for us.

Still, there's plenty of impact to go around!] 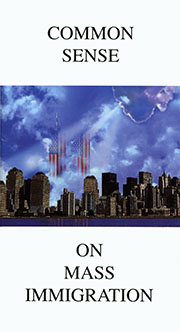 There's a heated debate about whether American K-12 education has declined. (My considered conclusion: probably yes, taking into account the increased dropout rate.) But what can't be denied is increased cost. Per pupil expenditure rose from $2,290 in 1980 to $8,745 in 2002. [Table 166] K-12 education now costs $415 billion, about four percent of Gross Domestic Product.

Immigration—and not the often-cited "baby boom echo"—is driving the school-age population increase. Immigrants are younger and tend to have more children. Thus they account for a disproportionate share of the growth in enrollment and costs. In 2000, about 8 million of the total 53 million school-age (5-17) children in the U.S. were the offspring of immigrants who had arrived since 1970. This is equal to all of the growth in the school-age population over in the last 20 years. Immigration adds not merely to the total cost of K-12 education, but to per-pupil costs. School districts must hire specially trained teachers and institute new programs. Bringing a student with limited English skills to average performance levels requires spending an additional $10,000 per student, according to a recent case study. Although there are no national estimates (why not?), bilingual education probably adds $4 billion to education expenditures in California alone.

Ironically, immigrant students who go through some type of bilingual education appear to earn significantly less than their counterparts in English immersion classes. Many immigrant students drop out anyway. Almost half (44%) of Hispanic immigrants ages 16 to 24 do not have a high school diploma. [Supplemental Table 3.3b]

School violence is more frequently encountered in districts with high concentrations of immigrants. So is remedial education.

Even immigrants who stick it out and go to college suffer relative to natives. College bound Latinos and Mexican-Americans were the only major ethnic groups for which verbal SAT scores declined between 1987 and 2003.

As an immigrant myself, what seems to me to be the real question is: What is the impact on American children of having their classrooms filled with foreigners? Recently, I asked a leading education expert whether there was any research on the subject.

"Not only is there no research," she said, "but there isn't going to be any research—because no one wants to know the answer."

The answer, however, wants to know us.