It is the best of times, it is the worst of times for nationalism in Europe. Patriot parties are leading the polls in major European countries, though this mass support doesn’t prevent them from invariably being described as “Far Right” by the Main Stream Media. But it’s unclear if any of these parties have a path to power in the short term. Worse, there are few signs of short-term hope in Germany, the most powerful and influential of all.

No less than the President of the United States has put the spotlight on Sweden, the archetypical Open Borders, multicultural soft dictatorship of leftist dreams.

Needless to say, the Swedish government is trying to pretend nothing is wrong, as is the American MSM. Indeed, Vox’s fanatically anti-White Zack Beauchamp is blaming Trump’s statements on VDARE.com, which is apparently a “dark place” [Trump’s invention of a Swedish terrorist attack was funny. But it likely comes from a dark place. February 19, 2017]

But no Voxplanation can conceal that Swedish society is beginning to buckle under the pressures of its failed multicultural policies. The riots that broke out just after Trump spoke on Swedish society caused blogger  Ann Althouse to ask "BUT: What if Trump's TV is some freaky Twilight-Zone thing and he can see the future?" In fact, riots like that happened in Sweden in 2008, 2010, 2013, and 2016.

The Facebook post made by a Swedish police officer, who blamed the breakdown of law and order on Muslim immigrants, has thrown the entire country into turmoil.  (He’s now being investigated for a “Hate Crime.”) The Social Democrats, one of the historic pillars of the Swedish political order, recently hit its lowest mark in the polls in a half century [Sweden’s Social Democrats hit 50-year poll low over asylum crisis, Reuters, January 25, 2016]. Meanwhile, the nationalist Sweden Democrats continue to grow in support, and there are some signs they may even be able to break the cordon sanitaire the other parties have built against them. Indeed, the same MSM which today mock’s Trump’s claims was acknowledging only weeks ago the “Far Right” was surging because of “growing disquiet over migration” [First we take Hassleholm… Swedish Far Right Rises, by Richard Orange, Politico, February 10, 2017].

As Fox’s Tucker Carlson noted, the MSM is missing the point about Trump’s statement [We’re ‘Missing the Point’: Carlson, Fox & Friends Smack Media’s Reaction To Trump’s Sweden Admission, by Ken Meyer, Mediaite, February 20, 2017]. Trump quite accurately noted the huge pressure migration is putting on Swedish institutions and the major problems it is creating. And once again, Trump is forcing discussion of an issue the MSM, and the Swedish government, would rather suppress.

But with the next election not scheduled till September 2018, no change is likely in the short term.

One bit of news the American MSM has been able to suppress is the ongoing violence in France, as Paris and other cities around the Republic continue to burn [Le Pen SLAMS Hollande’s handling of Paris riots & leaving France on brink of CIVIL WAR, by Aletha Adu, UK Express, February 19, 2017].

When the MSM does address it, it blames the disorder on “police violence”:

The demonstrations are mostly against police violence, but at their core they are propelled by a deep-rooted anger over structural racism and the perceived failure of the French state to address a long-volatile situation. The “Théo Affair” began with the case of just one young man, but it has now ignited the frustrations of France’s black community, one of the largest in Europe.

Of course, it would have been far better for France not to import this community. It’s not like the French weren’t warned what would happen.

Countries like Hungary or Japan that brush off accusations of “racism” and prevent immigration actually prevent accusations of bias and major social problems in the long run. The only way to win the game of Diversity is not to play.

And it’s not surprising that France, which actually practices the civic nationalist policies American conservatives like to believe could solve the racial problem, is experiencing the same kinds of tensions between the police department and the black community as the United States.

As VDARE.com’s Peter Brimelow has written, the truth or falsity of accusations of police brutality are irrelevant when it comes to the duty of the government to quell disorder. “Ruthless coercion” is what is needed.

And this is the message Marine Le Pen has been taking to the French people. With the “center-right” Francois Fillon mired in a corruption scandal, Le Pen is extending her lead in the first round of the upcoming presidential election and even drawing closer in an expected second round runoff [New poll shows Le Pen gaining ground in second round voting, RFI, February 13, 2017].

Events are conspiring in her favor. And just as with Trump, some models suggest Le Pen will actually pull off the upset despite all odds [Le Pen is on course to be France’s next president, fund manager says from AI analysis, by Everett Rosenfeld, CNBC, February 15, 2017].

But she still should be considered the underdog until she pulls within single digits in the second round polls. 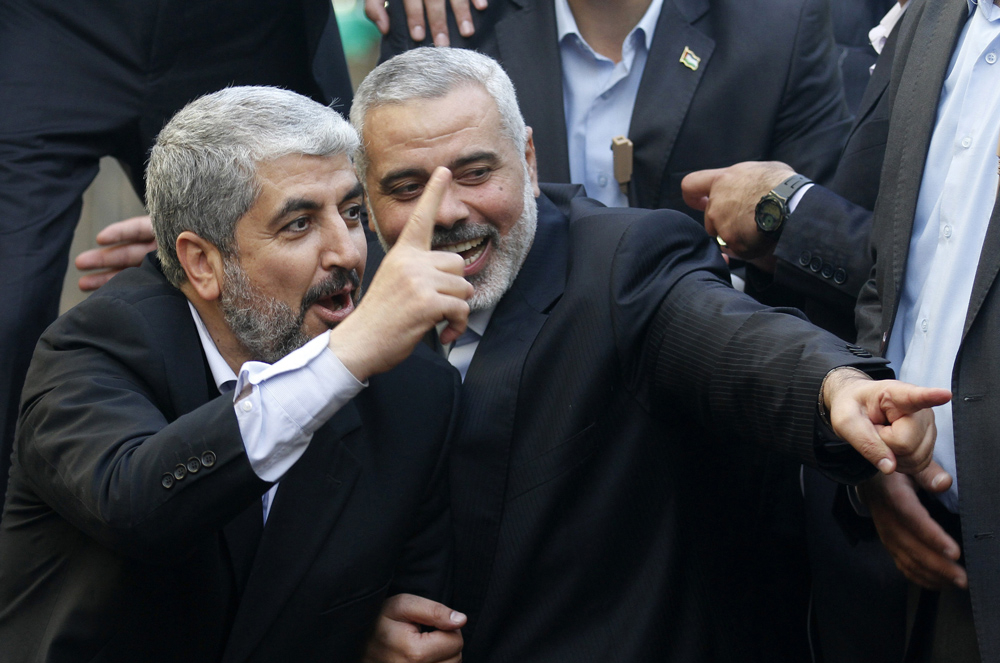 Geert Wilders (right)leader of the Freedom Party (PVV) in the Netherlands, kicked off his campaign on Sunday and is already leading the polls. Not surprisingly, the MSM took his denunciation of “Moroccan scum” who were committing crimes as an attack on all Moroccans [Fake News: Wilders Slams Foreign Criminals, Media Twists Words Into Attack On All Moroccans, by Virginia Hale, Breitbart, February 19, 2017]. Of course, this is practically identical to how the MSM distorted Donald Trump’s “they’re rapists” comments which began his (VICTORIOUS!) Presidential campaign.

But unlike Trump, Wilders must contend with a multiparty system. Wilders does not have nearly enough voters to win a majority and some voters are being spooked by his praise of Donald Trump [Can The Dutch Turn Back the Populist Tide, by Kaj Leers, RealClearWorld, February 20, 2017]. Worse, even if Wilders gains, the other parties, including the useless “center-right,” would probably refuse to join any coalition lead by the Freedom Party [What to expect from the Dutch elections in six charts., by Aleksandra Wisniewska and Billy Ehrenberg-Shannon, Financial Times, February 10, 2017].

So what happens then? Wilders said in 2016 if the Freedom Party wins the election and the other political groupings refuse to work with him, there will be a “revolt” [Wilders predicts a ‘revolt’ if PVV is not in next coalition, DutchNews, February 3, 2016].

It may come to that. At the least, if the PVV wins the most seats and is not in the next government, whatever coalition is cobbled together will collapse at the first crisis.

The completely unnecessary and astonishingly reckless decision by Angela Merkel to welcome essentially unlimited Muslim migration may have destroyed Germany forever.  And in the short term, it’s likely to end her career, as polls show Merkel is finally headed for defeat [Shock Poll Sees Merkel Fall Behind Social Democrats For The First Time, by Chris Tomlinson, Breitbart, February 7, 2017].

But incredibly the person likely to replace her is far worse. SPD leader Martin Schulz leads a party which is already forming alliances with the Greens and Die Linke (The Left) to prevent even the minor immigration control measures which exist in Germany [German Left Parties Conspire To Prevent Migration Deportations, by Chris Tomlinson, Breitbart, November 27, 2016]. While some civic nationalist leaders like Geert Wilders are strongly pro-Israel, Schulz’s shocking comment that “for me, the new Germany exists only in order to ensure the existence of the State of Israel and the Jewish people” is practically treasonous for a man who aspires to leadership of the German people [Say a big ‘thank you’ to Martin Schulz, by Avraham Burg, Haaretz, February 14, 2014].

But Schulz, a former European Union president, is a great rallying symbol for those who want to preserve the EU. Schulz defends mass immigration because refugees bring something “more valuable than gold,” which is “unflinching faith in the dream of Europe” [The Trump Approach Will Never Be Our Approach, by Klaus Brinkbaumer, Markus Feldenkirchen, and Horand Knaup, Die Spiegel, February 8, 2017].

Clinging to a dream which is rapidly crumbling around you and stubbornly ignoring inconvenient facts is hardly a model of statesmanship. But it’s more inspiring, in a sick way, than Merkel’s nihilistic approach, as even now she continues to demand Germany accept more refugees [German chancellor Angela Merkel urges Europe to take MORE refugees as she says Islam ‘isn’t the source of terror,’  by Rachel Burford, Daily Mail, February 19, 2017]. So Schulz actually some idealistic followers, though, true to their socialist principles, they are just stealing Donald Trump memes and putting Schulz’s face into them, rather than creating any original content [Germany’s Schulz Wants To ‘Make Europe Great Again’ – From the Left, by Jacob Steinblatt, Vocativ, February 20, 2017].

For the German Right, this will be catastrophic in the short term, but perhaps necessary. Merkel has shown at this point there is nothing that can happen which will make her meaningfully reverse her policy. The center-right which has supported her must be defeated and discredited so a new German right can emerge—perhaps led by the Alternative for Germany.

Yet such a reconstitution must happen quickly. The demographic consequences for Germany, and all Europe, are approaching the point of no return. Though a SPD victory may be necessary in the short term, there is no “long term” solution for the German Right or for Germany itself.

The fate of the Continent, and the West, will be determined in a few short years.

Patriots must act quickly, for there will be no other chance to Make Europe Great Again.