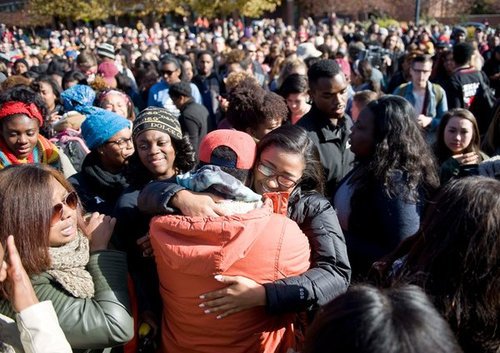 Madness In Missouri: Football Is Not Worth America's Future

Capitulation, self-abasement, groveling—are the words even strong enough to describe the actions of Tim Wolfe [Email him] president of the University of Missouri, who has just resigned because of pressure exerted on him by what amounts to a black lynch mob? [Tim Wolfe, University of Missouri System President, Resigns, by John Eligon, New York Times, November 9, 2015] The Chancellor of the University, R. Bowen Loftin, has also been forced out.

The power of social media, a climate of extreme white guilt, the moral hegemony of black issues in America, and the leverage a football team has over a sports-mad community, forced Wolfe, a white man, to resign his position of authority because of incidents he had no hand in creating [How the Missouri football team just took down its university president, by Philip Bump, Washington Post, November 9, 2015]

Hilariously, the 4-5 Missouri Tigers football team wasn’t entirely united in threatening to boycott the upcoming game against BYU unless Wolfe resigned. One white player has been quoted as saying: “"As much as we want to say everyone is united, half the team and coaches—black and white—are pissed. If we were 9-0, this wouldn't be happening" [Missouri player says many on team don't support practice boycott, by Sheldon Richardson, ESPN, November 9, 2015].

Had Missouri been in contention for an SEC East title, you can bet your life savings the team would never have joined the Social Justice Warrior campaign to unseat Wolfe. Witness the complete lack of interest in holding the program accountable when its players were accused of rape last year, which the Tigers finished as champions of the Eastern Division [Missouri Football's Rape Culture “And So On And So Forth" by Jessica Luther, VICE.com, September 9, 2014].

But what exactly forced Wolfe to resign? Well, it smells like just another campus hoax of the type that the Cultural Marxist Left regularly uses to advance its goals of dismantling “white privilege” a.k.a., ultimately, Western Civilization itself:

Racial tensions at the campus have been rising over the last several months. Last month, an excrement-smeared swastika was on a dorm’s new white wall was the catalyst for a hunger strike initiated by Jonathan L. Butler, a 25-year-old graduate student. “I already feel like campus is an unlivable space,” Butler, who is African American, told the Washington Post last month. “So it’s worth sacrificing something of this grave amount, because I’m already not wanted here. I’m already not treated like I’m a human.”

In addition to the swastika incident, Payton Head, the Missouri Students Association president and an African-American, said he was racially abused as he walked on campus. That incident triggered a student protest when university officials did not address it for a week. Last month, a student yelled the N-word at members of the Legion of Black Collegians in a campus plaza while they were rehearsing for a play. [Why Missouri football players are going on strike; university president won’t quit, by Cindy Boren, Washington Post, November 8, 2015]

What type of reprobate would use feces to draw a swastika but a lunatic Leftist aiming to stampede the administration into making concessions to their anti-white demands?

What are the odds that Jonathan Butler was himself was responsible for the act that he claims motivated him to start his hunger strike because of the campus is “an unlivable space?” This sort of thing has happened many times before—back in 2004 Sam Francis wrote that

At San Francisco State, the [LA Times] reports, two black students scrawled racial epithets in their own dormitories and then claimed "white racists" did it. At Northwestern University, a Hispanic student claimed someone grabbed him, held a knife to his throat and called him a bad name. At Claremont College a professor claimed her car was smeared with anti-Semitic slogans. Police say in all these cases the perpetrator was the alleged "victim".

Even more absurdly, Payton Head, the black student who claims to be the victim of racial pejoratives, serves as the Missouri Students Association president and was even the 2015 Mizzou Alumni Association Homecoming King. If he’s been oppressed at Missouri, he certainly continues to fall upward.

The kicker for questioning Head on the veracity of being called a “n*gger” comes courtesy of his resume:

When senior Payton Head was in high school, he never won anything. He applied for his homecoming royalty court all four years and never made it once on top 10. That’s why when he heard his name called as the 2015 Homecoming king at Faurot Field, he froze. 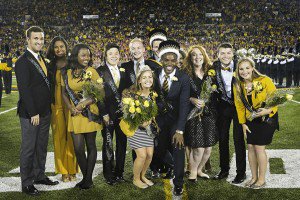 “It was really, really a shocker for me to win,” Head said. “I was just thrilled to be on court and serve with such incredible people. Any one of them standing next to me I thought would’ve made an amazing homecoming king or homecoming queen. It was baffling. I didn’t know what to say.”

This was the Missouri Students Association president and Alpha Phi Alpha Fraternity, Inc. member’s first time participating in Mizzou Alumni Association’s Homecoming. He had been involved in the Legion of Black Collegians’ separate homecoming celebrations since his freshman year. In fact, he ran for LBC count as a freshman and lost that too.

Head has been an activist for social change since he stepped foot on MU. He joined the Social Justice committee as a freshman — then, it was called the Multicultural Issues committee, but Head changed the name during his sophomore year to reflect the current goals of the committee. Under his leadership, the MSA Social Justice committee was nominated for an Inclusive Excellence Award by the MU chapter of the NAACP and as the Coretta Scott King Organization of the Year in 2014.

(Wait! How come black students at Missouri (79 percent white and 8 percent black) get to have their own, racially-exclusive homecoming event...ah, fuhgeddaboutit.)

Note that Head didn’t immediately go to the campus police and report the offense—even though Mizzou police and administrators have a record of reacting to offenses against Political Correctness with unbridled hysteria. Instead, he took to social media and project the encounter, to trigger Social Justice Warriors nationwide. It worked:

The first time someone shouted a racial slur at him on campus, Payton Head was shocked, a little stunned. He grew up on the south side of Chicago in a black community where he was used to being in the majority. He had never had direct racism thrown in his face before.

The second time it happened to him, Head said, he was walking with a friend to get cookies Friday night when a red pickup truck slowed and young people screamed the n-word at him.

But Head is now the president of the students’ association at the University of Missouri.

So he knew what to do: Tell people.

His social-media post had been shared well over 1,000 times within a few days, the Columbia Missourian newspaper spread it as well, and the responses were more than he could keep up with.

Many people thanked him for speaking out, with comments like, “Preach, baby, preach!”

A spokesperson for the campus police said that the incident was reported to have happened near campus, not on it. The Columbia Police Department does not have a report of that nature by Head, according to a spokesperson there.

Head thinks his account resonated so widely because “this story is not just something that happens here. It’s not a Mizzou issue. It’s a societal issue. And very few people are privileged to have the voice to speak up that people will listen to.”

[What the student body president did after he was called the n-word — again, by Susan Svrluga, Washington Post, September 16, 2015]

There exists literally no proof that Head was called the dreaded N-word at all, save for his decision to go to Facebook and tell the entire world about it. But in a country where it is racist to even question his claim (there is no burden of proof, because as a black male, Head is beyond rebuke), the poop swastika incident and the 2015 Mizzou Alumni Association Homecoming King’s claim that he was called the N-word have whipped up a storm that has cost the white president of the university his job...for starters.

All the insanity of life in 2015 America is on display in this episode.

I’ve long argued that college football is the opiate of America. We must find a way to break this addiction. The future of the country our children will inherit is far, far more important than our alma mater’s performance in any game.