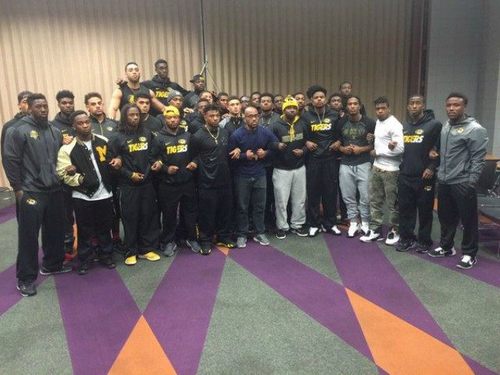 Missouri to Get University Worth of Its 6th-place Football Team

One of the older American collegiate jokes is a college president promising to build a university worthy of its football team (this may go back to the U. of Maryland in the early 1950s).

With the U. of Missouri football team firing the president and chairman of the board, it looks like Mizzou will get an administration worthy of its football team, which is 1-5 in conference play and has wracked up quite a record in recent years for sexual assault and domestic violence charges.

A recurrent theme here is how conservative millionaires give a lot more to college football than to advancing their ideas. For example, Mizzou is notoriously bad at fundraising compared to powerhouses like the U. of Alabama:

The Missouri athletic department ranks near the bottom of SEC schools in private donations, raising $22 million in the 2013-2014 fiscal year.

On the other hand, the U. of Alabama is swimming in donations. Americans love a winner.

On the other other hand, Manhattan-born Paul Singer uses his giving on Presidential candidates (it was front-page news when he endorsed Marco Rubio), fundraise for the Manhattan Institute, push for gay marriage, Israel, and more immigration (for America, not Israel). You can buy a lot of think tank staffers for the cost of first rate offensive coordinator.