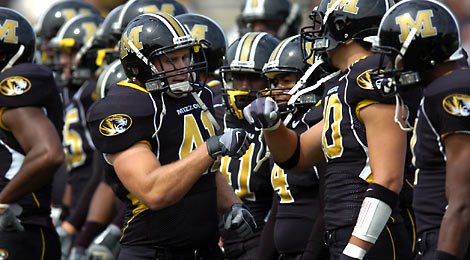 COLUMBIA, Mo. (AP) — The president of the University of Missouri system resigned Monday with the football team and others on campus in open revolt over his handling of racial tensions at the school.

President Tim Wolfe said his resignation was effective immediately. He made the announcement at the start of what had been expected to be a lengthy closed-door meeting of the school’s governing board.

The complaints came to a head a day earlier, when at least 30 black football players announced that they would not play until the president was gone. One student went on a weeklong hunger strike. …

For months, black student groups have complained of racial slurs and other slights on the overwhelmingly white flagship campus of the state’s four-college system. Frustrations flared during a homecoming parade Oct. 10 when black protesters blocked Wolfe’s car, and he did not get out and talk to them. They were removed by police.

Black members of the football team joined the outcry on Saturday night. By Sunday, a campus sit-in had grown in size, graduate student groups planned walkouts and politicians began to weigh in.

Until Monday, Wolfe did not indicate that he had any intention of stepping down. He agreed in a statement issued Sunday that “change is needed” and said the university was working to draw up a plan by April to promote diversity and tolerance.

The Tigers’ next game is Saturday against Brigham Young University at Arrowhead Stadium, the home of the NFL’s Kansas City Chiefs, and canceling it could cost the school more than $1 million.

“The athletes of color on the University of Missouri football team truly believe ‘Injustice Anywhere is a threat to Justice Everywhere,’” the players said in a statement. “We will no longer participate in any football related activities until President Tim Wolfe resigns or is removed due to his negligence toward marginalized students’ experience. WE ARE UNITED!!!!!”

Head football coach Gary Pinkel expressed solidarity on Twitter, posting a picture of the team and coaches locking arms. The tweet said: “The Mizzou Family stands as one. We are united. We are behind our players.”

A statement issued by Pinkel and Missouri athletic director Mack Rhoades linked the return of the protesting football players to the end of a hunger strike by a black graduate student who began the effort Nov. 2 and has vowed to not eat until Wolfe is gone.

He’s a grad student in P.E. studies, by the way.

“The protests began after the student government president, who is black, said in September that people in a passing pickup truck shouted racial slurs at him. In early October, members of a black student organization said slurs were hurled at them by an apparently drunken white student.

Also, a swastika drawn in feces was found recently in a dormitory bathroom. …

The association said in a letter Sunday to the system’s governing body that there had been “an increase in tension and inequality with no systemic support” since last year’s fatal shooting of Michael Brown in Ferguson, which is about 120 miles east of Columbia.

Brown, an unarmed black 18-year-old, was shot and killed by a white police officer during a struggle, and his death helped spawn the “Black Lives Matter” movement rebuking police treatment of minorities. …

Concerned Student 1950 has demanded, among other things, that Wolfe “acknowledge his white male privilege,” that he is immediately removed, and that the school adopt a mandatory racial-awareness program and hire more black faculty and staff.

I realize worrying about rape on campus is so 2014, but abolishing the football team would be a good way to cut the rape rate.

I realism football coach Gary Pinkel is now a hero in the struggle against racism, but his record on rapism isn’t so hot. From ESPN:

Pinkel and Missouri athletic director Mike Alden addressed the media on Friday, one day after ESPN’s “Outside the Lines” reported that Missouri officials were aware of two allegations against Washington before his 2010 arrest for deviate sexual assault.

… OTL reported Thursday that Washington was accused by four women of assault before he was dismissed from the football team in 2010 after he was accused of felony deviant sexual assault. He was convicted in September 2011 and sentenced to five years in prison in 2011, but was released after 120 days as part of a first-time offenders program.

“I have to have information to make decisions,” Pinkel said of his handling of Washington. “He said, she said — unless I have some other information, that’s what I go with. If the police after they investigate it — they do a lot more than I can do. Certainly, I look at that. If they don’t charge him, how am I supposed to … unless there’s other circumstances, other things I know. And sometimes that’s happened before. But that’s how I’ve always done it.

… Pinkel was asked about dismissing wide receiver Dorial Green-Beckham, who wasn’t charged with a crime despite two arrests on marijuana charges and another incident where he allegedly was involved in pushing an 18-year-old woman down a flight of stairs. Green-Beckham later ended up at Oklahoma but was denied a waiver there by the NCAA on Friday. …

Thursday, Missouri chancellor R. Bowen Loftin issued a statement, which said in part: “As it relates to one case highlighted in the report of an assault in 2008, our internal processes broke down, and the proper procedures were not followed regarding the student conduct discipline process and a necessary Title IX investigation. Our students and their parents, our faculty and staff, our alumni and community neighbors all deserve a safe and secure campus environment, and you have my word and my solemn promise that I and our entire administration will continue to work toward that end.”

“Outside the Lines” also reported Thursday that in 2010, a Missouri women’s soccer player got into a fight with Washington’s girlfriend at a bar in Columbia. Police arrested and cited both women for fighting. The soccer player told police that, during the fight, Washington walked up and “struck her with a closed fist on the left side of her face.”

She told police she wanted to press charges against Washington, and a warrant was issued for third-degree assault. But later that day, she came to the police department and said she had changed her mind. According to the police report, the woman spoke to her soccer coach, who said her scholarship might be in danger because of her arrest.

The soccer player wrote in an email to “Outside the Lines” that she did lose her scholarship but, with the help of an attorney, was able to have it reinstated.