Fake Hate Crimes Of The Past: Cornell 1969 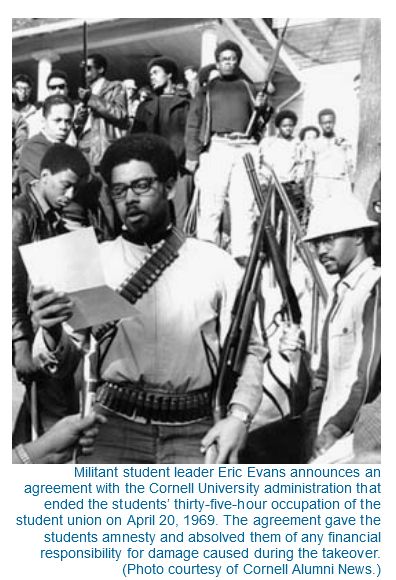 I was reading Jonah Goldberg's new book, Liberal Fascism, and it reminded me that the 1969 takeover of Willard Straight Hall by armed black militants at Cornell was based on a fake hate crime—a cross had been burned in front of a black dormitory—by black militants themselves.

For example, supposedly the militants got guns to defend themselves after a cross was burned in front of one of the black dormitories and a brick was thrown through one of the windows of another. Now, decades later, it comes out that these were acts committed by the militants themselves to win campus sympathy—a foretaste of the Tawana Brawley hoax of later vintage.[The Day Cornell Died, By Thomas Sowell, Hoover Digest, 1999]

Since that time there have been a lot of fake hate crimes, to the point where it's the first thing I suspect in cases like the Columbia Professor who said she found a noose on her door..Sowell's article is worth reading in full.