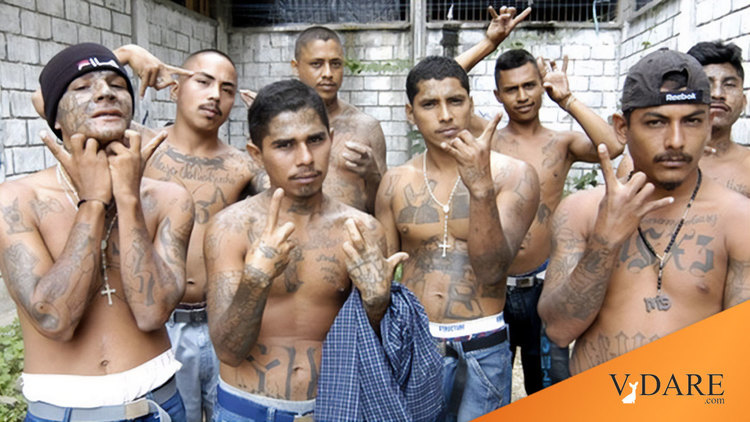 Following CNN's Lou Dobbs, the Associated Press and other Main Stream Media outlets have been trying out some newly-discovered immigration vocabulary—words like "catch and release" and "OTM."

Great. But the readers of these pages here at VDARE.com have demonstrated—through e-mail feedback—that they are much more in touch than most full-time journalists with the reality of the illegal alien invasion and what should be done about it.

Here's a prime example—an e-mail I received about my column and legislative analysis of H.R. 2933, "The Alien Gang Removal Act of 2005" [PDF].

"What good is it going to do to deport known gang members if our borders are not secure? Have a nice day."

You've hit the nail on the head there, Bob!

Congratulations for unmasking the folly of employing incremental legislative solutions for a litigation-based deportation system that is fundamentally flawed in the first place.

I've been making the point for years: litigating the deportation of every single illegal alien and criminal alien resident—served up to the federal circuit courts of appeal by the Department of Justice's Executive Office for Immigration Review's (EOIR) nationwide Immigration Court system—is a meaningless exercise…as long as deported aliens are free to simply abscond from deportation, or (if actually deported) just walk back into the country.

With little physical security of the borders, the EOIR litigation bureaucracy is really just another avenue for illegal aliens and criminal alien residents to stay in the United States.

And, as another VDARE.com reader points out regarding the "gang deportation" bill, once illegal alien gang-bangers are brought before EOIR immigration judges, an order of deportation is never certain.

In fact, newly-arrived illegal aliens gang-bangers may walk out of EOIR Immigration Court with a grant of asylum—a free pass to lawful permanent residence, that is—from the very same proceedings that were supposed to be deporting them.

"Too many BIA [JM Note: EOIR's appellate body—Board of Immigration Appeals] decisions are out there dealing with 'fear of street gangs.'

"And yep, the 'out' is for the gang-banger to just claim: "Hey, I came to the U.S. to escape the gang [or] escape the evil Guatemalan/Honduran/El Salvadoran cops who want to kill me because I have tattoos [or] to start a new life."

"And the [EOIR] immigration judges fall all over their bull$#!% claims.

"And if you are a juvenile, struggling up the ranks of MS-13, just starting out with your tats?—it's even easier to convince an immigration judge that you were 'persecuted' by the cops because of your tattoos, and that you need asylum because as a 'child' you face certain death upon return, where only permanent residence in the U.S. will save you. Of course, there are no gangs, or MS-13, here in the U.S., right?

"For juvenile gang-bangers, better yet, just claim to be under 18. Then the 'bar' is significantly lower to win asylum based of 'fear of the gangs' or 'fear of the police because of your tattoos' because, as you know, tattoos don't mean you are bad, or a criminal, or involved in a gang, of course.

"I even heard one little jerk claim the three dots on his hand 'for mi vida loca' stood for the three weeks he was unjustly detained by his home country's cops, and another lamely claim that he just liked the initials 'MS' and had no idea what they meant."

So roll that up in your pipe and smoke it, Treason Lobby.

There are people out there (like these VDARE.com readers) who have moved far beyond the fantasy world of believing that the EOIR litigation bureaucracy actually works.

So why not give summary removal a chance?

As long as the physical security of our borders are a travesty, the time is long overdue to abolish the EOIR and move toward a system of expedited removal—similar to Immigration Act Section 235(b)—for illegal aliens and criminal alien residents.

Congress would also need to expand mandatory detention under Immigration Act Section 236(c), scrap the credible fear charade of turn-'em-loose asylum screening, and close the candy store of relief from removal that is the current Immigration Act.

My e-mail in-box shows that there are others out there who share this dream.

Unfortunately, none are members of Congress…yet.