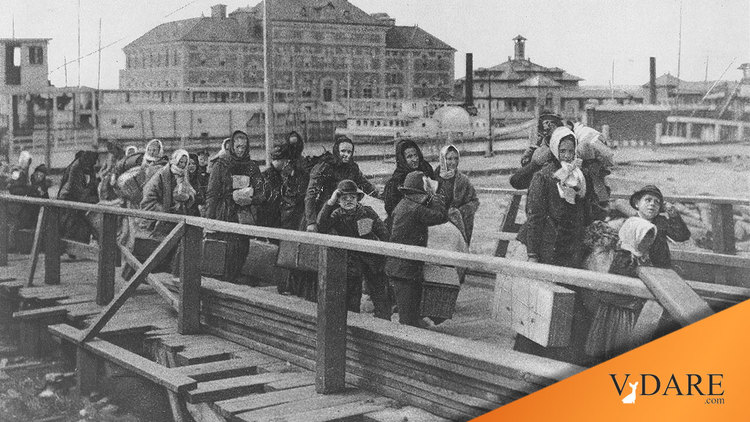 With smiling faces and dark eyes shining with excitement, two twenty-something illegal aliens—boyfriend and girlfriend—are wearing their own street clothes for the first time in three weeks.

They've just turned-in their orange jumpsuits to deportation enforcement officers at the Department of Homeland Security (DHS) service processing center, and are about to appear in U.S. Immigration Court for the first time as "non-detained" aliens.

Though caught by the U.S. Border Patrol after illegally entering the country, their temporary setback at an immigration detention facility on the Mexican border is about to be over.

They could care less if vigilant citizens like the (unofficial) American Border Patrol spotted them.  It doesn't even matter that the (official) U.S. Border Patrol caught them.  And they certainly pay no mind to the recent teeny-weeny expansion of expedited removal powers for the Border Patrol under Section 235(b) of the Immigration Act.

If illegal aliens know the magic words—"political asylum"—they can exploit the automatic rubber-stamping of virtually all claims of a "credible fear" of persecution through a process built into Section 235(b).  Amazingly, the asylum officer corps from Eduardo Aguirre's U.S. Citizenship and Immigration Services (USCIS) grants 97 percent or more of all the "credible fear" asylum interviews they conduct.

If (or, more accurately, when) the aliens "pass" their "credible fear" test, they are referred for Immigration Court hearings in the bureaucratic briar patch of the Department of Justice's Executive Office for Immigration Review (EOIR).  There they have the privilege of using America's ridiculous de facto non-deportation system to their advantage.

In the EOIR, the aliens' first order of business is always getting out of detention and continuing the journey north—just as if they had never been caught at all.

The immigration judge hearing this couple's cases agreed to "change venue" to another Immigration Court in the big city.  This time it's Chicago. The aliens provided the address of someone's distant cousin in nearby Rockford, Illinois, in order to post an immigration bond.

The illegal alien couple have never been more than fifty miles from the Mexican border. They have no idea what Rockford looks like, or what they'll find when they get there.

But they don't care. They're bursting with excitement as their journey north is about to resume.

In Immigration Court, the aliens admit to the removal charges brought by the DHS, agreeing that they have attempted to enter without immigration documents, or are present in the United States without being inspected or admitted by an immigration officer.  They also file applications for political asylum, perhaps with the help of a Treason Lobby foot-soldier at the detention camp.

So it really doesn't matter what they've said, or what is written on their political asylum applications at this point.

It doesn't have to be the truth, just a good story.  No one will ever know.

At least, that is how the system is supposed to work.

Believe it or not, when the EOIR gets rid of a case by changing venue for aliens who in reality have no business being out of immigration custody in the first place, the immigration judge even gets credit for "completing" the case as part of the EOIR's own self-serving statistics!  [See EOIR double-speak on pages 43 & 68 [PDF], completed cases include "changed venue" – where aliens just disappear into the U.S.]

But what if this young couple decides not to go to Rockford after all?

What if they settle in Dallas or Jersey City instead?

There's no guarantee where they will go. And, with little nationwide immigration law enforcement, the federal government has scant hope of ever finding them again.

The illegal couple knows, despite their capture by the Border Patrol and detention by the DHS, they have accomplished all their goals.

The illegal couple has entered the United States.  They have continued their trip to the interior of the country. They will seek work illegally wherever they land.  They'll probably never see anyone from the DHS' Immigration and Customs Enforcement (ICE) division again.

As the happy young travelers walk out of the gate and leave the detention camp, they know they have their whole future in America ahead of them.  And that future doesn't include deportation.

Unless they are spotted in jail by an ICE investigator someday, they will live their lives untouched in the illegal alien underground of the New America.

And, because of the current perverse interpretation of the 14th Amendment's "Citizen Child" language, their U.S.-born children and grandchildren will be American citizens.

For the young couple, the DHS service processing center was their own Ellis Island on the Mexican border.  They might look back fondly someday and reminisce about their brief immigration detention in El Paso or Los Fresnos, Texas;  Florence or Eloy, Arizona; or maybe East Mesa or El Centro, California.

They owe their newfound freedom and birthright American citizenship for their progeny to the federal immigration bureaucracy of the EOIR, the DHS, the immigration bond process, their phony political asylum applications, and the "change of venue" to another city for supposed future hearings by an EOIR immigration judge.

If there were no EOIR Immigration Court – and the "credible fear" asylum interviewing of the Section 235(b) expedited removal process wasn't a 97 percent guaranteed rubber-stamp approval—this happy young couple would be on the first plane back to their homeland escorted by DHS detention and removal officers.  That's how expedited removal is supposed to work!

Without the EOIR Immigration Court system, these illegal aliens would never have made it out of the new Ellis Island.

Though the Treason Lobby shrieks about "unnecessary" immigration detention and expedited removals, the young couple restarting their journey into America has little to fear.

Under America's current non-deportation system, the catch-and-release encounter with the federal government was little more than a speed bump in their journey.

Like Beltway sniper Lee Boyd Malvo, these illegal aliens successfully navigated their way through the federal immigration bureaucracy to get out of detention.  They made it look easy . . . too easy.

Of course, if they can do it, so can al Qaeda. But that's the least of our problems.