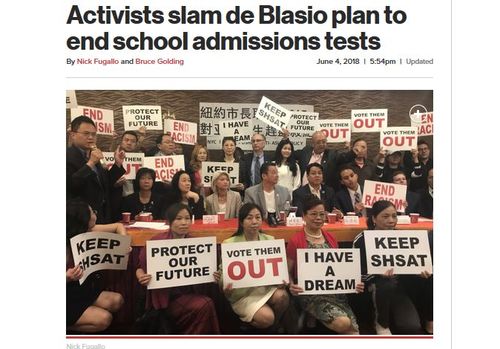 John Derbyshire: We Should Be Talking About Meritocracy’s Problems, But New York’s De Blasio Just Wants To Destroy The Whole Thing

I got a bit carried away with congressional maneuvering over immigration issues last week, leaving myself no time for other topics in the news. Here's one of those topics: the assault on meritocracy. 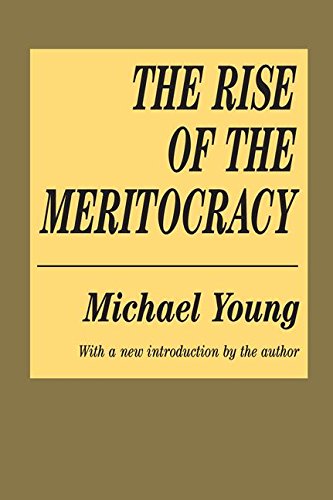 Now, the whole issue of meritocracy is problematic. It needs some serious thought and public discussion, but isn't getting much of either.

I've spoken and written about this at length. Here quote from myself I was, for example, in my February Diary at VDARE.com this year, commemorating the sixtieth anniversary of Michael Young's book The Rise of the Meritocracy:

And here I was on Radio Derb, October 2015, longish quote:

This is in my opinion the number one social-science issue of our time. How do we avoid the trap Michael Young described in 1958, the meritocracy trap, of a society stratified by ability, especially now we know that ability is largely inherited, and so presumably stamped in the genome?

And how shall we cope when the geneticists have located the genes that contribute to intelligence and personality? They are well under way—you'd be surprised …

So here's how it'll be fifteen or twenty years from now. You want to have a baby. Using your sperm, some number of your wife's eggs are fertilized in a lab. The genomes of the embryos are scrutinized to see which one has the best genes for intelligence and personality. That one is implanted and taken to term; the others are destroyed.

This is not even genetic engineering, although we may have that too. It's just picking the best of many children you might have, if you had many children—a hundred, perhaps.

Who gets to do it, though? Just the rich and the powerful? Or everybody? What are the social consequences?

This is a great looming social issue of our time, and even more of our children's time.

OK, so here’s a new item concerning New York City's specialized high schools. There are nine of these very selective schools. One specializes in the arts and performing arts, though, and is generally left out of news items like this one. The others admit students via a rigorous written examination, the Specialized High School Admissions Test, SHSAT for short.

The news: New York City's communist mayor Bill de Blasio wants to scrap the SHSAT. Why does he want to do that? Why do you think? 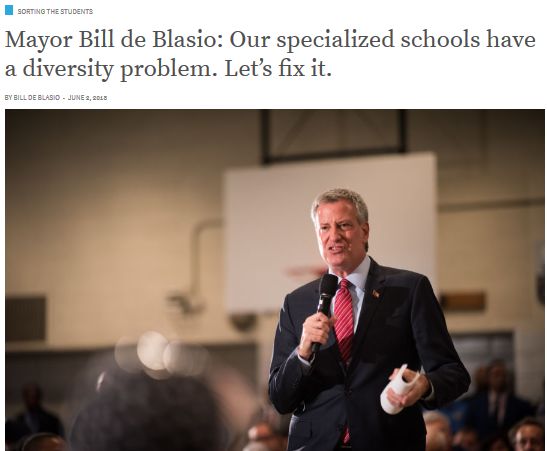 Right now, we are living with monumental injustice. The prestigious high schools make 5,000 admissions offers to incoming ninth-graders. Yet, this year just 172 black students and 298 Latino students received offers. This happened in a city where two out of every three eighth-graders in our public schools are Latino or black …

Can anyone defend this? Can anyone look the parent of a Latino or black child in the eye and tell them their precious daughter or son has an equal chance to get into one of their city's best high schools? Can anyone say this is the America we signed up for?

[Our specialized schools have a diversity problem. Let's fix it by Bill de Blasio; Chalkbeat.org, June 2, 2018]

I did a Ctrl-F for the word "Asians" in de Blasio's op-ed: no hit. That, to borrow a culinary simile from French politics, is like writing a 944-word article about jugged hare in redcurrant jelly without mentioning the jugged hare.

They spoil the effect somewhat though by having a larger-than-average sex imbalance: seventy percent guys, thirty percent gals. The average for the specialized high schools is more like sixty-forty. Obviously some really flagrant discrimination going on there.

The local politics on this issue is getting pretty rancorous. June 10th there was a big demo outside City Hall: Asians—well-nigh all East Asians, to judge from the news pictures—protesting de Blasio's plan to scrap the SHSAT. Taking on those Tiger Moms, Comrade Bill, you're looking for trouble. [Protesters gather at City Hall to oppose de Blasio’s no-test plan, By Gina Daidone and Bruce Golding, NY Post, June 10, 2018]

For people who don't mind facing the realities of human nature, the two takeaways here are:

Importing An Overclass: To import an overclass is to invite resentment and disharmony. How is this not obvious?

Race and Sex Realism: On the second point, the truly depressing thing is how far outside the boundary of acceptable commentary race and sex realism remain.

None of this is astounding or outrageous; it's just basic biology.

Yet these truths are unmentionable. Even sensible, well-informed commentators—people as based as you can be while holding a job writing for Main Stream Media publications—steer clear of them.

Here for example is Michael Goodwin, a very smart and sensible guy, writing on the New York Post about de Blasio's proposal:

But those facts are ignored by de Blasio because they reveal the real problem—too many elementary and middle schools in black and Latino neighborhoods are perennial failure factories. He talks a good game about fixing them and is throwing a ton of taxpayer money at them, but has little to show for it.

Just gotta fix the schools, see? Just gotta find a way to fix those schools! That'll get rid of all those discrepancies!

Here's another commentator I like and admire a lot: Heather Mac Donald, writing in City Journal, not about de Blasio's plan, but about the push for race and sex diversity in the sciences at large:

When it comes to URMs [“Under-Represented Minorities”] math deficits show up at the earliest ages. It is only there where the achievement gap can be overcome, through more rigorous, structured classrooms and through a change in family culture to put a high premium on academic achievement. The institutional response to the achievement gap, however, is racial preferences.

So again: fix the schools—and the families!

Gotta fix the families, too!

I hasten to say that I don't believe there is dishonesty here. Michael Goodwin, on my one personal encounter with him, seemed like a straight-up guy. Heather I count as a friend, and I don't doubt her sincerity.

Not everybody can be interested in everything, though. These are graduates of the Humanities and law schools, lacking the cold eye of the scientifically inclined.

Plainly we need more and better education in math and the sciences. Here's a suggestion: Let's establish some high schools specializing in those fields, with admission by a rigorous written examination …