John Derbyshire: Roy Moore, The Pervnado Witch Hunts, And The Need To Bomb Liberal Arts Colleges From The Air And Sow The Ground With Salt 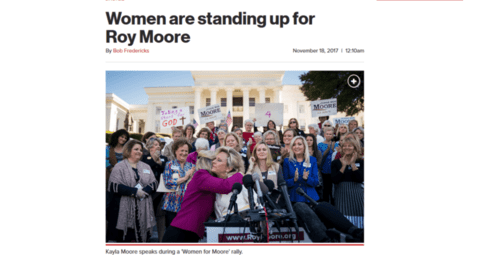 There was a rally last week in Montgomery, the Alabama state capital in support of U.S. senate candidate Roy Moore, who I very much want to win December 12th, mainly because he's so not a Ryan-McConnell Establishment Republican donor puppet empty-suit-bot. The newsworthy thing about this rally: it was all-female. It was in fact organized by Kayla Moore, the candidate's wife. Quote from her:

I have been married to my husband for over 32 years. He was a graduate of West Point and served our country in Vietnam and he has always been an officer and a gentleman. He is a loving father and a grandfather. Most important, he is a Christian.

A poll published Thursday this week had Roy Moore up seven points over his liberal Democrat opponent for the senate seat. That's shortly after a different poll showed him six points ahead.

Say what you like against democracy, but sometime the voters are the only ones showing any sense of proportion. Otherwise what my New York Post calls the Pervnado rages on, with angry or tearful women appearing out of the underbrush to accuse famous men of having groped them twenty or thirty years ago. TV actors and talk-show hosts get fired; movie-studio bosses take forced leave of absence; only politicians go on getting elected.

I confess I've lost interest in the whole silly business. The famous people are in any case less and less famous. My own acquaintance with celebrity culture is sketchy at best, and the latest tranche of defendants are mainly just names that I'm vaguely aware of but can't confidently place in any context.

Some model, for example, has accused Russell Simmons of raping her in 1998. When I saw that headline I thought "Wha?" Isn't Russell Simmons that annoying homosexual bloke who makes exercise videos? He raped a model? A female model? Is anyone expected to believe that?

But no, apparently that's someone else. Celebritywise, I'm clueless.

Charlie Rose I'm a bit more sure of. He has some talking-head show on some network I never watch. Now I find out he's a liberal, so plainly I haven't been missing anything.

I do know who Al Franken is. He's a senator from one of the midwestern states. Given his voting record, though—NumbersUSA has him an F-minus on immigration—I can't work up much indignation about whatever it is he's supposed to have done. It looks pretty picayune anyway—normal workplace horsing around the last time I was an employee, back in the Clinton administration.

Ah yes, the Clinton administration. That's the one that was nearly brought down by accusations that Bill Clinton did the kind of things all these celebrity Liberals are being hounded out of their jobs for doing. Clinton was of course stoutly defended by, yes, Liberals.

Now Liberals, especially female ones who feel they need to get aboard the anti-male locomotive, are twisting themselves into pretzels trying to square their attitudes then with their attitudes now.

One of my own state's senators, Liberal Democrat Gyno-American Kirsten Gillibrand, told the New York Times that she thought Clinton should have resigned after his affair with Monica Lewinsky became known. Then, having said that, she went into pretzel mode. Listen to her trying to jam her left foot into her right ear, quote:

See, the important thing is to redirect the hysteria towards President Trump. If that means an empty, meaningless, way-too-late swipe at Bubba, well hey. 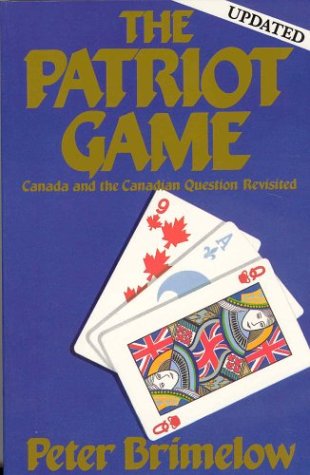 Still, those of us Americans still grimly holding on to our sanity in all the swirling hysterias can take some slight comfort from the fact that up in the frozen tundra to our north, in what I grew up hearing called the Dominion of Canada, things are even worse.

The current moral panic up there is over pronouns: I, you, he, she, it, we, they. For reasons I can't be bothered to understand, and which I most likely wouldn't be able to understand if I could be bothered, it is now considered a gross moral failing up there to address a person by the wrong pronoun, where "wrong" is defined to mean "upsetting to the person."

Why would a pronoun be upsetting? Well, if you are a guy but believe yourself to be a girl, hearing yourself spoken of as male is upsetting; and vice versa for girls who believe they are guys. So we are told.

How many such people are there, actually? The New York Times says it's 0.6 percent of the adult population—say one in 170. [Estimate of U.S. Transgender Population Doubles to 1.4 Million Adults, By Jan Hoffman, June 30, 2016] How am I supposed to know one when I see one, so I can avoid giving offense? This no-one can tell me, not even the New York Times. Perhaps they wear a badge or something, I don't know. I don't get out much.

That's the background to the creepiest video clip of the week out of Wilfred Laurier University in Ontario.

Laurier, as the university is known for short, has a Department of Communication Studies where, I quote from the website:

We study the intersection of language, media and culture from an interdisciplinary perspective and train students in the histories, theories, and methodologies of Communication Studies.

She gave the students some information on various approaches to the issue. Among those various approaches was the approach of Jordan Peterson, Professor of Psychology at the nearby University of Toronto. Prof. Peterson has attained some notoriety in the Dominion by making public his view that the fuss about pronouns is a heap of moose dung. He has refused to accept the position maintained by the Canadian government, that referring to someone by the pronoun "he" when the person would prefer "she" or "they" or "xe" or "Fin-tim-lin-bin-whin-bim-lim-bus-stop-F'tang-F'tang-Olé-Biscuitbarrel," is tantamount to genocide.

So Ms. Shepherd showed a brief video clip of Prof. Peterson explaining his position as part of her coverage of the issue to her class.

A week after playing that video clip to her class, Ms. Shepherd learned that some unknown number of her 48 students, quite possibly just one of them, had complained to the college administration that the video clip was a violation of the student's human rights.

Ms. Shepherd was called into a meeting with three members of the Laurier faculty: Herbert Pimlott, Associate Professor of Communication Studies, Nathan Rambukkana, an Assistant Professor in the department, and Adria Joel, manager of Gendered Violence Prevention and Support at the school. Yes, apparently that's a job.

Ms. Shepherd took the precaution of secretly taping this interview. The tape is 43 minutes long, but if you can spare the time you should listen to it. It offers a terrifying glimpse into the Cultural Marxist mind that is absolutely dominant in academia, down here in the states as well as up there in the Dominion.

I'm working with a new computer here and a bit wary about downloads until I know my way around it, so I'll just quote from the transcript at the National Post website. [Here’s the full recording of Wilfrid Laurier reprimanding Lindsay Shepherd for showing a Jordan Peterson video, by Tristin Hopper, November 20, 2017]

Here, for example, is Professor Pimlott, who to judge from his publication list is an old-line Marxist-Leninist—not merely a Cultural Marxist, an actual Dictatorship-of-the-Proletariat kulak-killer. He said, after Ms. Shepherd pointed out that Jordan Peterson is a public figure,

He's a public figure, and a lot of people there like Richard Spencer of, I don't like calling them alt-right, it gives them too much legitimacy, but Richard Spencer, right? The Nazis actually used, this is a historic … issues around the free speech idea in the 1920s in Weimar Germany as an issue around which which is what they're using now. We know that someone like Richard Spencer is using theories and ideas that don't have any academic credibility. He's a public figure. But in terms of, if we introduce someone, we give them greater credibility in a certain condition. I agree that there are public figures out there that bring people, uh, bring hatred, target groups and if you look at statistically the degree of suicide attempts of trans people, young people, it's the highest of any group in society. And, you know, it's, you go through … Indigenous people … and so on. There are things that don't have academic credibility and I just don't think … personally think I have some problems., I have no problems. with the fact that these things are out there and people are going to engage them but we have to think of the atmosphere that we also create for the learning process.

Just to remind you: That lungful of illiterate turkey-gobble came out of an Associate Professor of Communication Studies in an accredited university. Just one more. This is Assistant Professor Rambukkana, who as well as being the most fluent speaker of CultMarx jargon in the room, is also one of the scariest-looking critters I have ever set eyes on.

“I understand the position that you're coming from and your positionality, but the reality is that it has created a toxic climate for some of the students …”

When Ms. Shepherd tried to find out how many of her students had complained, the interrogation squad would not tell her.

We do, though, know where Wilfred Laurier University is coming from and their positionality. It is the same place of origin and the same positionality as the rest of the liberal-arts academy, there and here.

It’s the place of origin and positionality that has ultimately resulted in hysterical witch hunts like the Pervnado and against Judge Moore.

The case for destroying liberal-arts colleges and faculties by aerial bombardment, sowing the ground with salt, and assigning surviving faculty to hard labor for life on chain gangs in the Aleutian Islands, has been strong for some time.

With the release of that tape, it got stronger.

Listen to the dreadful thing and try to tell me you don't agree.