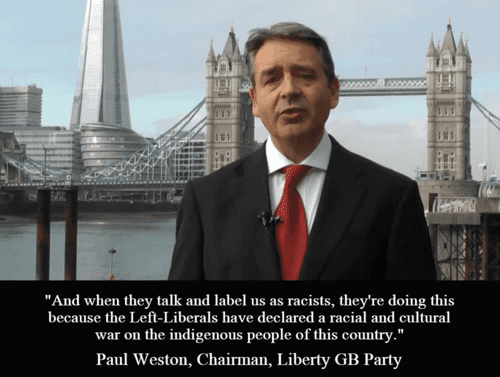 The word “racist” is now thrown around with such blithe abandon, I have sometimes fantasized about us on the Dissident Right just owning the insult.

After all, a Whig was originally a horse rustler in the English-Scottish borders; a Tory was a fugitive Catholic in the bogs of Ireland. Homosexuals now have well-funded departments of Queer Studies at respectable universities, while black people cheerfully address each other as “my nigga.” Linguists refer to this owning-the-insult process as “reappropriation.”

Of course, it would be quite a trick to reappropriate “racist.” One person who has taken a shot at it is British dissident Paul Weston. His 7½-minute video “My name is Paul Weston and I am a racist,” first put on YouTube in June 2013, has been viewed over 1.4 million times in various versions, the one with French subtitles leading the pack at 1,064,088 when I looked just now.

“If I want to defend what I grew up in, what I was born into—my country, my British culture, my heritage and my history—I am apparently, according to absolutely everybody today, a racist.”

If you didn’t catch Weston’s reappropriation effort, you may have heard of his April 2014 arrest for reading passages critical of Islam from Winston Churchill’s book The River War to a small crowd in Winchester. Weston spoke from the steps of the city hall. You can see him doing the deed here. He quoted:

“How dreadful are the curses which Mohammedanism lays on its votaries! Besides the fanatical frenzy, which is as dangerous in a man as hydrophobia in a dog, there is this fearful fatalistic apathy. The effects are apparent in many countries. Improvident habits, slovenly systems of agriculture, sluggish methods of commerce, and insecurity of property exist wherever the followers of the Prophet rule or live. A degraded sensualism deprives this life of its grace and refinement; the next of its dignity and sanctity. The fact that in Mohammedan law every woman must belong to some man as his absolute property – either as a child, a wife, or a concubine – must delay the final extinction of slavery until the faith of Islam has ceased to be a great power among men. Thousands become the brave and loyal soldiers of the faith: all know how to die but the influence of the religion paralyses the social development of those who follow it. No stronger retrograde force exists in the world. Far from being moribund, Mohammedanism is a militant and proselytizing faith.” [River War, 1st Edition, Vol II, P. 249]

For this, Weston was actually arrested by four policemen and taken off in a paddy wagon, though charges were eventually dropped.

Arrests and prosecutions for speech that is insensitive to Designated Victim Groups are now routine in Britain. Two weeks prior to Weston’s arrest, another Englishman, Tim Burton, was acquitted by a magistrate’s court in the city of Birmingham for the offense of “racially aggravated harassment” against a Muslim activist. Burton had tweeted that the activist was a “mendacious, grievance-mongering taqiyya artist.” (Taqiyya is the permission given to Muslims by their holy books to practice deception against infidels for the good of the faith.)

Watson and Burton both belong to a new political party, Liberty GB, with “GB” standing for “Great Britain.” The party has a website, of course. They also have an ideology: “Culturism,” cooked up by an American scholar, John Kenneth Press, who is currently teaching at a university in South Korea. Culturism has a website, too, promoting a book by Press titled, yes, Culturism.

Culturism is a variant of nationalism, intended as a challenge to multi-culturism, and as an end-run around the multiculturalists’ “diversity” propaganda. The culturist says: “I favor a world of diverse cultures, each in its own country.” As the cases of Weston and Burton illustrate, what they mainly object to is the creeping Islamization of Britain and the status of Muslims as a Designated Victim Group, with all the privileges and preferences that flow therefrom.

I should say that John Press takes exception to my own different use of the word “culturism.” In We Are Doomed and my articles on VDARE.com I have used “culturism” to refer to the extreme nurturist side of the nature-nurture argument: to the idea, basic to the Standard Social Science Model and inherent in all “X is a social construct” arguments, that human nature is shaped entirely by social forces, biology playing no role.

Press calls that “culturalism” and e-raps me on my e-knuckles whenever I use “culturism” for it. He is not always consistent, though. On page 15 of his book Culturism we read:

[Modern policymakers] correctly acknowledge that there are no differences in the innate capacities of different races.

That word “correctly” makes Press a culturist in the Derbyshirean sense, a biology-denialist. Probably the truth of the matter is that he is just not very well-informed in the quantitative human sciences—his doctorate is in the History of Education.

Whatever the exact epistemological status of culturism, the Liberty GB party is an interesting development that bears watching. Last week I had lunch with Jack Buckby, the party’s Outreach Officer, who is visiting the U.S.A. in search of support.

Buckby enjoys the distinction of having been expelled from a British university for his opinions. Following the horrific Islamist murder of British soldier Lee Rigby, in broad daylight on a London street in May 2013, Buckby had tweeted remarks like:

This was apparently too much for the University of Liverpool, which had been monitoring his tweets. They expelled Buckby without a degree.

Liberty GB is just two years old this month and has only a few hundred members, but shows promise.

For one thing, the principals seem to have learned from the errors of Britain’s other nationalist parties. The currently most prominent of these, Nigel Farage’s U.K. Independence Party (UKIP), seems to have trouble staying on message, suffers from poor party discipline, and is, says Buckby, “as bad as the rest of them” on Islamization. (See Nigel Farage was today accused of 'making it up as he goes along' as Ukip ditched the idea of capping immigration, By Matt Chorley, DailyMail, March 4, 2015 and Flamboyant Ukip spokesman who compared Nigel Farage to Jesus sacked after series of gaffes, By John Stevens, Daily Mail, March 10, 2015,).

UKIP and the other parties fail spectacularly in addressing the threat posed to Britain by Islam and Islamisation. Additionally, Liberty GB takes a far tougher line on immigration, advocating a complete halt for at least 5 years (with no exceptions) and expulsion of all illegals.

UKIP’s predecessor on the nationalist right, the British National Party (BNP), has imploded under the leadership of Nick Griffin. Buckby, who was briefly associated with BNP, blames the collapse on Griffin’s suspicion of anyone not a Griffin sycophant. I think Griffin’s own charmless personality also had something to do with it, although I personally give him credit for purging out the older street-fighting and anti-Semitic elements from BNP.

For another thing, Liberty GB shows good strategic sense. In the upcoming general election on May 7th they can afford to contest only a handful of seats. They have chosen places where there are enough Muslims to make the threat of Islamization plain to local non-Muslims, but not so many as to swamp the vote.

Paul Weston himself will be standing for election in Luton South, thirty miles north of London. Luton is about a quarter Muslim. It was the scene of ugly demonstrations in 2009, when Islamists abused and insulted British troops returning from Iraq.

UKIP’s candidate in Luton South is Yasin Rehman. I can’t discover whether Rehman is a practicing Muslim, but he is surely of Muslim heritage: “Yasin” names a chapter of the Koran.

I know: this populist jostling down at the lowest levels of electoral significance is all a bit pond-life-ish. Neither Liberty GB nor UKIP will be summoned to Buckingham Palace to form a government in 2015. In 2020, though, one or other of them, not likely both, will be the patriotic and immigration-restrictionist opposition to Britain’s globalist, open-borders major parties.

And by that point, there will far more Muslims:

[Why has the number of Muslims in the UK risen so much? By Leon Moosavi, Huffington Post; December 18, 2012.]

And far more Britons receptive to Liberty GB’s emphasis on the threat of Islamization.