John Derbyshire On Culturalists vs. Biologians; Or, Where Is The American Harald Eia?

While I was indisposed a couple of weeks ago the VDARE.com editors posted a transcript of my talk to the Mencken Club last December. The topic was “The Left and Human Nature.”

There is a great deal more to be said on that topic than my few impromptu remarks at Mencken. The best concentration of insights at a nontechnical level was collected by the Norwegian comedian Harald Eia and broadcast five years ago on NRK1, the main channel of the Norwegian Broadcasting Corporation, in a series of seven programs under the group title Hjernevask, which means “Brainwash.”

This came to mind in part because the second of the seven Hjernevask programs covers the same ground as my Mencken talk—the absence of any evidence that personality is shaped by parenting.

I also found myself thinking of Hjernevask when reading about Jon Stewart’s decision to step down as host of the satirical TV program The Daily Show.

Like Harald Eia, Stewart is a comedian engaging with serious issues. Eia’s programs, however, shed light on important matters of general interest while yet being entertaining and often amusing. Stewart just smirks his way through half-hour endorsements of the left-liberal Narrative. Eia instructs while entertaining; Stewart merely propagandizes while entertaining. You could call Stewart… Hjernevask.

The sixth of Eia’s seven programs, which is about race, was circulated on the HBD blogs soon after it was broadcast in 2010. I have just watched all seven for the first time, and recommend them to the attention of anyone interested in the human sciences.

The Hjernevask programs can be seen, with English subtitles, at the following links.

Eia covers these issues from both of the non-religious viewpoints: the culturist and the biologian.

(I coined “biologian” in We Are Doomed. A biologist is a student of biology. We need a word for people willing to include biology when investigating human nature. "Biologian" is that word!)

Culturists adhere more or less strictly to the “blank slate” model of human nature. As a psychiatrist tells Eia at 13m23s in the second program, infants are formless lumps of clay to be shaped by the adults who raise them. There is no, or very little, innate structure to the newborn personality: the finished adult is the product of environment, of nurture.

Biologians argue that the basic contours of the individual personality are in place at birth, formed by genetics and by events in the womb—by nature. Nurture then modifies us to some degree, but as William Hazlitt guessed two hundred years ago: “The accession of knowledge, the pressure of circumstances … does little more than minister occasion to the first predisposing bias.”[ On Personal Character, London Magazine, March, 1821]

These are not two competing scientific hypotheses. Only biologians exhibit the modest, open-minded, data-respectful approach that characterizes genuine scientific inquiry. None of them is a total naturist; all allow some role for nurture, often fifty percent or more.

Culturism by contrast is an ideological position. Many culturists allow no role whatsoever for biology. Everything about the finished human adult is the product of forces from outside the person. When a culturist does allow biology as a factor, he rarely thinks it accounts for more than 20 percent.

Eia’s programs bring this difference out very well. Each of them begins by interviewing representatives of the culturist viewpoint: activists, sociologists, a criminologist, a “gender researcher.” Then Eia gets on the internet and tracks down biologians: geneticists, a neurologist, quantitative psychologists and sociologists.

Then he takes recorded clips from each group’s interviews to members of the other group and shows us their reactions. This is the really revealing stuff.

Biologians, shown clips of culturists explaining their ideas, will laugh, shake their heads, roll their eyes, and offer cogent rebuttals. The culturists, by contrast, confronted by biologian explanations, squirm. They never offer any data.

Eia [at 33m49s in program 3]: On which studies do you base your belief that one cannot tell with children if they are going to be gay or hetero?

Sociologist: [After hesitation] I was once a child myself.

Eia: So you look at yourself?

Sociologist: No-one said I was going to be gay.

Eia: But you base it on more than yourself?

Sociologist: I have friends who have experienced the same.

Often they fall back on ad hominem:

Eia [at 35m40s in program 6]: Have you decided that there are no genetic differences between populations that give them unequal distributions on an IQ curve?

Activist: I’m sure you could find it if you look for it.

Eia: But should we look for it?

Activist: No, I don’t feel we should.

Eia: So this kind of knowledge is damaging?

Most often they just declare the biologian view “not interesting.”

Sociologist [at 34m59s in program 3]: It’s not interesting… I fail to see how these studies have any interest.

Gender researcher [at 36m42s in program 3]: But it’s not interesting, either.

Criminologist [at 36m38s in program 4]: My problem is that I don’t feel that is a very important question.

Philosopher [at 4m4s in program 6]: I feel that when talking about humans, biology is less interesting than all the other things we can talk about.

Homosexuality researcher [at 2m39s in program 7]: I think that this is something that doesn’t have to occupy my time.

It’s amazing how little interest academics concerned with human nature can have in, zzzzzz, biology, which “is less interesting than all the other things we can talk about.”

In addition to the pleasure of watching anti-science ideologues squirm and sputter, the Hjernevask programs offer other entertainments. Eia himself has a kind of leprechaun charm, listens patiently to all the theories, and presses his points with good humor. He is a nationally-known comedian in Norway, so people break into smiles when he approaches them, backlighting all the earnest enquiry with a glow of merriment.

Eia himself is plainly a stone-kicker, respectful of quantitative researchers and skeptical of postmodernist flimflam; but he gives everyone a fair hearing.

There is also the charm of Norway, a pretty place with the intimate feel you find in nations with small populations and languages outsiders don’t bother to learn. There is an exceptionally high proportion of beautiful women: check out Martine Aurdal at 9m45s in program 1. 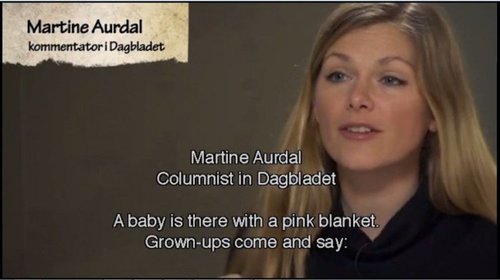 Hjernevask is an aggregate 280 minutes of video, but you can do it one program at a time, and it’s well worth the trouble. As an HBD primer, it’s hard to beat.

However how did it get shown on a national TV network, though? In Scandinavia of all places, the heartland of white ethnomasochism?

Our population is sixty-four times Norway’s. How is it that they produce an article so superior to ours?

And where is our Harald Eia?