We don’t write much about opera here on VDARE.com, other than in the phrase “soap opera.” A search of our articles for “+opera –soap” brought up just ten items, two of them by me, and none really engaging with opera.

There have been three news stories about opera in the past few days, all to some degree pertinent to issues of tolerance, multiculturalism, and immigration. I’ll take them in order.

worldwide in the last five seasons. You know some of the tunes from Carmen even if you don’t know you know them: the Toreador Song, for instance. (To which, as children, we used to sing the words: “Toreador, please don’t spit on the floor …”)

Carmen, in common with at least three other A-list operas, opens in the city of Seville; to be exact, outside a cigarette factory. From the Daily Caller:

In his cultural history of cigarettes, Cigarettes Are Sublime, [Richard] Klein explained that “Carmen’s Seville, it is no accident, was in the 19th century the principal center and probable origin of cigarette making in Europe—a city famous for its immense factory where thousands of women, many young and barely dressed, languorously rolled cigars and manufactured cigarettes in dense heat and the poisoned air of tobacco smells and human sweat, intoxicated by the thick effluvia arising from leaves and bodies and by their own continuous smoking; their skin was dyed to ravishing or ravished shades of nut-brown color by the stain of nicotine.”

In Act I of the opera, a chorus of girl workers from the cigarette factory sings in praise of the weed:

(“We follow with our eyes the smoke in the air, which rises, scented, towards the sky. Pleasantly it rises to your head and gently fills your soul with joy.”)

That was too much for Healthway, a government agency which “seeks to promote and support healthy lifestyles to reduce the burden of preventable disease in Western Australia.” When West Australia Opera staged a production of Carmen recently, Healthway … well, they didn’t exactly tell them to stub it out, but they cleared their collective throat suggestively.

This wasn’t just a matter of the opera company kowtowing to government health bureaucrats. There were financial considerations. To quote from Chapter 52 of the 21st century’s greatest opera novel (so far): “The first truth about modern opera production is that all opera companies and opera houses, everywhere in the world, are chronically hard up.”

Healthway, it turns out, is a financial supporter of West Australia Opera under another clause in the agency’s mission statement: Healthway “provides sponsorships to Sport, Arts Racing and Community Events organisations and community groups which encourage healthy lifestyles.”

Not that Healthway put financial pressure on WA Opera. Perish the thought!

WA Opera’s general manager, Carolyn Chard, said Healthway did not pressure her into making the decision, but noted that they entered the partnership agreement “with a great deal of respect.”

Ri-ight. I wonder what Caruso would have said? 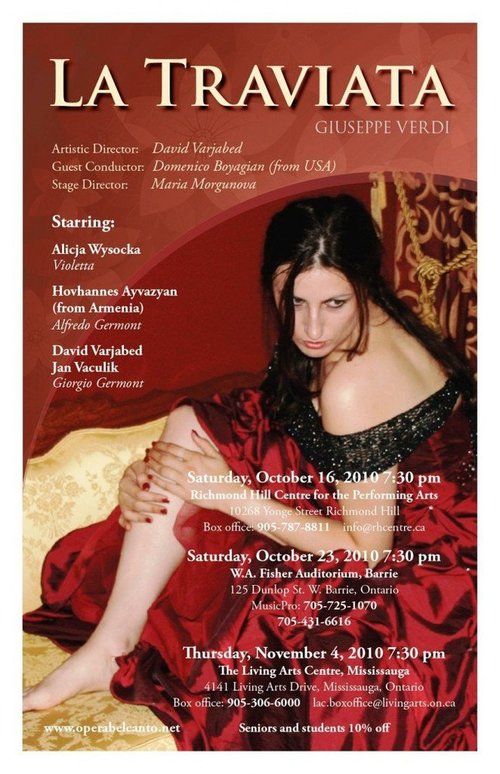 The opera here is La traviata, another longstanding favorite—number one, in fact, in the Operabase rankings, with 748 performances in the last five seasons. Once again, even if you’re not an opera fan, you know at least one tune from La traviata, the Act I drinking song.

At some point early in this month the Opéra Bastille, a prestigious opera house in Paris, was staging a performance of La traviata. Sitting in the front row center right behind the conductor—so these are expensive seats we’re talking about, $300 per—were a couple from the Middle East, from one of the Gulf states. The lady was wearing a burqa, with her face covered.

At some point in the second act members of the chorus said they wouldn’t go on again unless the lady was removed, pointing out that the face-covering veil is illegal in France under a law passed in 2010 and upheld by the European Court of Human Rights earlier this year.

The lady was asked to leave, and she left, with her companion. Technically she could be fined $300, but it doesn’t look as though that’s going to happen. [Paris Opera cast refuse to perform for veiled woman, By David Chazan, The Telegraph, October 20, 2014]

Anyway, the production continued, with the chorus coming in to sing:

(“Come along, let’s draw a veil over what is past and gone.”)

This story is really a little parable of the corrosive effect multiculturalism has on liberty. Nobody would ever have thought of a law like that, telling people what they could legally wear—beyond the rules of ordinary decency, I mean—if there were not Muslims in France.

Yet another argument for libertarianism in one country: maximum discrimination at the borders, maximum liberty within them. 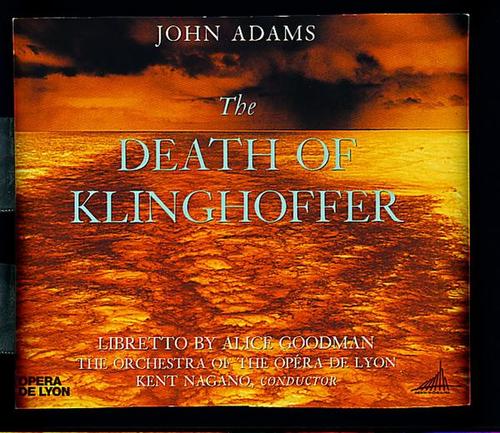 New York’s Metropolitan Opera is currently staging a production of The Death of Klinghoffer, a 1991 work by American composer John Adams. This opera is about the hijacking of the cruise ship Achille Lauro by Palestinian Arabs in 1985. Among the passengers on that cruise ship were many American tourists, including Leon Klinghoffer, a wheelchair-bound 69-year-old Jewish American, and his wife Marilyn. The hijackers shot Klinghoffer dead in his wheelchair, then ordered the ship’s crew to throw corpse and wheelchair overboard, which was done.

That’s what John Adams’ opera is about. As usual in opera, you get everyone’s point of view. In Carmen, José expresses his hopeless spurned love (before committing a murder of his own), and Carmen expresses her wild gypsy independence. In La traviata, Alfredo is mad at Violetta for leaving him, and Violetta shows her nobility of heart, having left Alfredo for lofty motives. Everybody gets heard. That’s opera.

So in The Death of Klinghoffer we hear one of the hijackers singing:

Are gathered they can

You know how to cheat

Where you have exploited,

Defame those you cheated,

And break your own law

Is one big Jew.

Was it your pal

Who shot that little girl

At the airport in Rome?

You would have done the same.

There’s so much anger in you.

Children in the Promised Land

Because of your shelling.

Old men at the Wailing

Wall get a knife

In the back. You laugh.

The bus to Tel Aviv

And burn them alive.

His sheep and his goat,

And the land he wore out.

You just want to see

Pretty fair, I say. (You can read the whole libretto here.)

Frankly, I think this is a fuss about nothing, and the least interesting of these three stories.

Is The Death of Klinghoffer a good opera? I don’t know, I haven’t seen it. Opera is a total experience: music, words, and drama. The music sometimes carries pretty dire drama. To quote from myself:

In Bellini’s La straniera the following happens: The jealous Arturo, misunderstanding a meeting between the heroine and her brother, accuses the brother of being his rival. He stabs the brother, who falls into a lake. Apprised of his error by the girl, he throws himself into the lake to save the brother. Both men disappear beneath the waters. The heroine picks up Arturo’s sword and calls for help. People come running and, seeing her with the bloody sword, charge her with murder. At her trial, Arturo suddenly rushes in (“oppressed and gasping”). He confesses to her brother’s murder. While everyone is stunned by this, the brother walks in. “A God came to my aid,” he explains.

Opera lovers can supply many similar examples. Possibly The Death of Klinghoffer will join the catalog of glorious silliness. I don’t know; I haven’t seen it.

I did see John Adams’ other well-known work, Nixon in China, and was underwhelmed; but then, my taste in opera is reactionary, so I’m not really the person to ask.

Tommasini’s review in the New York Times is positive, in fact quite glowing:

“Klinghoffer,” though not without flaws, including a couple of satirical Western characters that could have been left out, is a searching, spiritual and humane work. The piece is as much a ruminative reflection on the events of the hijacked Achille Lauro cruise ship as a dramatization of them.

This is one of Mr. Adams’s most inspired and personal scores, with episodes of haunting, hazy music in which, over subdued, ominous, sustained bass tones in the orchestra, instruments spin out melodic lines full of ancient-sounding curlicues. And Ms. Goodman’s poetic libretto, though often enigmatic, is powerfully so. Parts of the text remind me of Elizabeth Bishop’s poems, which can seem profound and full of richly detailed imagery, even when the meaning is obscure. [Distress at Sea, and Offstage, By Anthony Tommasini, October 21, 2014]

Sure, Tommasini writes for the New York Times. So does Nicholas Wade.

So put me down as someone willing to give the benefit of the doubt to high art, if this opera is high art. At least it’s trying to be; and at least one respectable, intelligent critic thinks it gets there, or most of the way there.

Having said that, let me add a sour footnote. This work or that might succeed as high art; but there is such a thing as selecting your material. In that regard, the high art of our time, and opera in particular, has been badly corrupted by politics.

Adams, like pretty much all contemporary artists, is a white ethnomasochist Lefty. From one of his interviews:

With Obama installed, the right has been looking for a cause and immigration is what they’re pushing. Arizona just passed a law ordering the cops to arrest and question anyone they even suspect of looking like an illegal. I was there for a day last week and couldn’t help noticing all the Hispanic people picking up trash or hauling suitcases in the airport. Were they afraid, had their family members been carted off? And to see the fat whites swaggering round in their uniforms! (Links added)[John Adams: ‘I just don't know what to say about American classical music’, By Peter Conrad, The Observer, June 19, 2010]

It would be easier to extend the benefit of the doubt to The Death of Klinghoffer if one did not know that there are points of view Adams would never dream of expressing in a libretto; points of view which, if someone else did put them to music, the Met would not stage.

I’m not holding my breath.