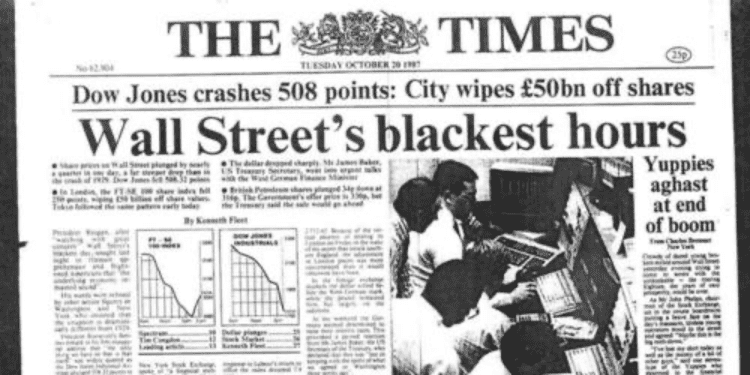 Brimelow On The Bailout, The Patriot Party, And The `87 Crash

As in the 2006-2007 Amnesty Wars, the House Republicans yesterday heroically confirmed their emergence as America's Third Party—the Patriot Party—by rejecting the bipartisan bailout Bill. The resulting caterwauling and the simultaneous stock market crash caused me to look up something I wrote for a British, non-financial audience, after the Crash of 1987—almost exactly 21 (aargh!) years ago.

Unlike in 1987, the stock market has been arguably overvalued and trying to break for a couple of years—anyone who is interested in this mundane subject can read my MarketWatch columns here. Bottom line (as we say in the trade): the House Republicans shouldn't be blamed for yesterday's rout, any more than they should be credited for today's rally. (But somehow no-one seems to be doing that).

NEW YORK–The lot of a financial journalist is not, totally, a happy one. The subject is inherently intractable. None of your colleagues want to read about it. Your audience of specialized business troglodytes usually know more than you do. They don't hesitate to say so.

How very different is the professional life of the political writer–courted by hostesses, fawned on by elected officials and, indeed, actually more influential than most of them. Adding insult to injury, those of us labouring in the financial field periodically look up from our tasks to find our humble corner invaded by these glamorous creatures. They grandly strikes poses amid the potatoes and trample down the turnips before departing amid cries of self congratulation on there versatility.

In the second week since the Wall Street crash, ["Black Monday," October 19, 1987] this posturing is all-pervasive. The intrusion is all the more noticeable in America because the financial and political capitals are so far apart. New York and Washington are rarely talking about the same thing–the Iran-Contra agitation excited little comment here–and it is therefore peculiarly irritating when the latter starts to tell the former what financial market movements really mean. Particularly when this hidden meaning turns out to be something the Washington establishment and its media allies have been proclaiming for a decade–the imperative need to raise taxes.

My own conclusion, after years of writing about the stock market, is that no one knows what its tergiversations signify. In a general sense, the market reflects economic prospects, but its particular fluctuations are too wild to be satisfactorily related to anything other than themselves. Even its long-term movements can be anomalous–no one has explained why the American stock markets lagged behind inflation throughout the 1970s before exploding upward in 1982.

Listening to what active traders say is the most useless tactic of all. Notwithstanding their professional assurance, traders live by their viscera, not their intellect, and will abandon even the most fervently offered rationalization at the drop of a price. "In general, run quickly," wrote Bernard Baruch, one of the greatest of them, in a memorandum to himself about his experiences in the 1929 crash. It applies to ideas as well as investments.

This is not say that I think the market is completely unpredictable. I've even written a book

arguing that some American investment newsletters have been able consistently to beat it. But consistently beating the market is extremely hard, requiring close attention and (probably) experience. Almost every major trading technique seems to work, in the right hands. Political prognostication, however, is not among them.

It's not inconceivable that the stock market can absorb the damage of the last two weeks, just as it absorbed serious breaks in 1937 and 1962. (The same cannot be said for stockbrokers–Wall Streeters are clearly nearing physical and emotional exhaustion, and some will bear the financial and psychological scars for life.)

A number of the most successful investment letters are still bullish. Dr Martin Zweig of the Zweig Forecast, who sold his stocks before the crash and made a 9 per cent gain on Black Monday with options, has cautiously re-entered the market with an eye to a big "buying opportunity".

For that matter, if the stock market is indeed to be viewed as a referendum on Reaganomics, as Washington claims, it must be remembered that even now it stands twice as high as when Reagan took office–whereas at the end of the Carter Administration, the Dow was about where it was 14 years earlier.

Some Wall Street veterans, applying the principle of Occam's Razor, find it helpful to think of the stock market as a vicious beast, constantly plotting how to hurt the largest possible number of people. It might well find those Washingtonians now confidently celebrating the end of the Reagan era a tempting target.

Of course, if the stock market does recover, Washingtonians will quickly find some other subject to pontificate about. But at least hard-working financial journalists will be left unirritated in their decent obscurity.