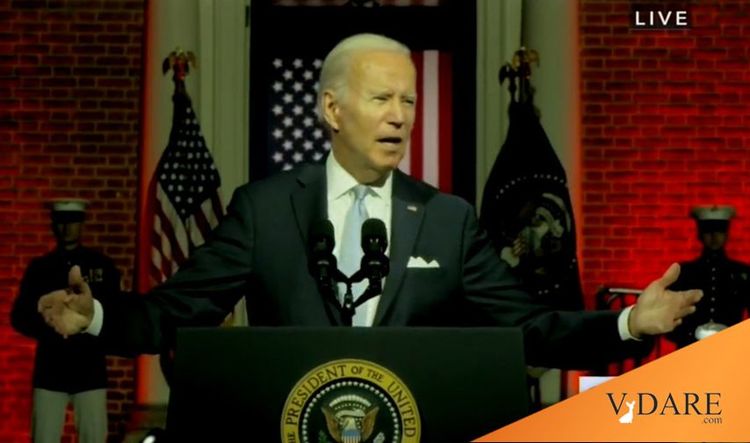 See also by Peter Brimelow: ”It Will Come To Blood”—Reflections On The Left’s Anti-Trump Inauguration Tantrum

Sketching out the plan for this edition of Radio Derb earlier in the week, I assumed that the president’s Thursday evening address to the nation would be the headliner of the week, so I reserved my first segment for it.

That was a mistake on my part. The speech wasn’t of any national significance. It was a partisan rant, of the kind that is appropriate to a party convention.

The advertised topic of the address was ”the continued battle for the soul of the nation,” and that gives the game away. When a politician today talks about ”the soul of the nation” you can be sure he’s going to tell us how good and righteous altogether he and his people are and how evil the opposition is.

Commentator Marc Thiessen, who is smarter than I am, foresaw this and wrote very incisively about it in a column at the Washington Post on Thursday, before the speech:

As a speechwriter for President George W. Bush, I helped write numerous presidential prime-time addresses to the nation. Every single one of them was to discuss either military action, a national tragedy or a major policy initiative.

[Biden is disgracing the institution of the prime-time presidential address, by Marc A. Thiessen, Washington Post, September 1, 2022]

Thiessen then lists, president by president, all of the prime-time presidential addresses of Dubya, Obama, Clinton, Poppy Bush, Reagan, and Trump. They all conform to that pattern: national, not political.

Dubya on Hurricane Katrina; Obama on the Boston Marathon bombing; Clinton on our operations in Somalia; Poppy Bush on a balanced-budget amendment; Reagan on the Challenger explosion; Trump on the pandemic; those issues all had a political dimension, of course, but in their prime-time addresses those presidents presented them as of equal concern to all of us.

(Thiessen does allow that Trump’s delivering his Republican National Convention acceptance speech from the Truman balcony was ”controversial,” but I don’t recall much controversy. A candidate’s acceptance speech is political by nature, everyone understands that in advance.)

Biden is the only president in more than four decades to ask the major news networks to preempt their prime-time programming just weeks before an election and broadcast a campaign speech whose stated purpose is to attack the opposition party.

The big TV networks figured out in advance the same thing Marc Thiessen did, and most of them turned down the White House request. I think only CNN and MSNBC covered the speech live.

I switched on my TV at 8 p.m. as I usually do to catch Tucker Carlson. There was Tucker, talking mainly about something else, with occasional inset pictures of Pastor Joe addressing our spiritual concerns in odd corners of the screen.

What about the content of the speech? Both the Washington Post and the New York Times offered summary takeaways—four takeaways in both cases. The Post’s four takeaways were:

Takeaways from Biden’s warnings about Republican threats to democracy, by Amber Phillips, September 1, 2022

The New York Times’s four takeaways, written up by the paper’s congressional correspondent Jonathan Weisman, were:

Biden Calls on Americans to Resist Threats to Democracy, September 1, 2022

So there, according to two of the Regime’s foremost media outlets, are eight takeaways for you to ponder.

And yes, Pastor Joe really did say ”a beacon to the world.” And of course the speech was full of whoppers:

MAGA Republicans do not respect the Constitution. They do not believe in the Rule Of Law. They do not recognize the will of the people. They refuse to accept the results of a free election.

”The Rule Of Law”? You mean our immigration laws, which Biden’s administration—with the eager cooperation of jurisdictions all over run by Biden’s party—refuses to enforce?

”The Constitution”? Including those pesky bits in Article Two about the Electoral College, and the Sixth Amendment’s guarantee of ”a speedy and public trial”?

”Recognize the will of the people” and ”accept the results of a free election”? Like Biden’s party failed to do for four solid years following the 2016 election, telling us the result was rigged by Russian interference?

But this is to parse the babbling of an idiot—sound and fury, signifying nothing.

The definitive put-down of a president’s speechifying was given to us a hundred years ago by William McAdoo, President Wilson’s Secretary of the Treasury, describing the speeches of Warren Harding:

His speeches left the impression of an army of pompous phrases moving over the landscape in search of an idea; sometimes these meandering words would actually capture a straggling thought and bear it triumphantly as a prisoner in their midst, until it died of servitude and overwork.

That is first-class rhetoric. I happen to think, though, that Warren Harding was one of our better presidents and that Harding’s speeches, although a bit gassy, were generally good. Check for yourself; there are plenty of them on the internet.

For sure, when you compare a Harding speech to the mean, spiteful, illiterate drivel we got from Pastor Joe on Thursday, it’s hard not to think that our standards for presidential oratory have undergone a catastrophic decline this past hundred years.

So, it appears, have our standards for Presidents.