J. Christian Adams’s INJUSTICE: The “Racial Agenda Of The Obama Justice Department” Turns Out To Be Anti-White Zealotry

Attorney General Eric Holder is finally getting some well-deserved scrutiny over his outright lies about Operation Fast and Furious. The Obama Department of Justice [DOJ] was involved in selling weapons to Mexican drug cartels that ended up killing at least one US Border Patrol Agent. The ostensible purpose: to track weapons flows. But it’s obvious that the real motive was to blame Mexican drug and border violence on our Second Amendment, rather than on Mexico’s corruption and Obama’s failure to secure the border. 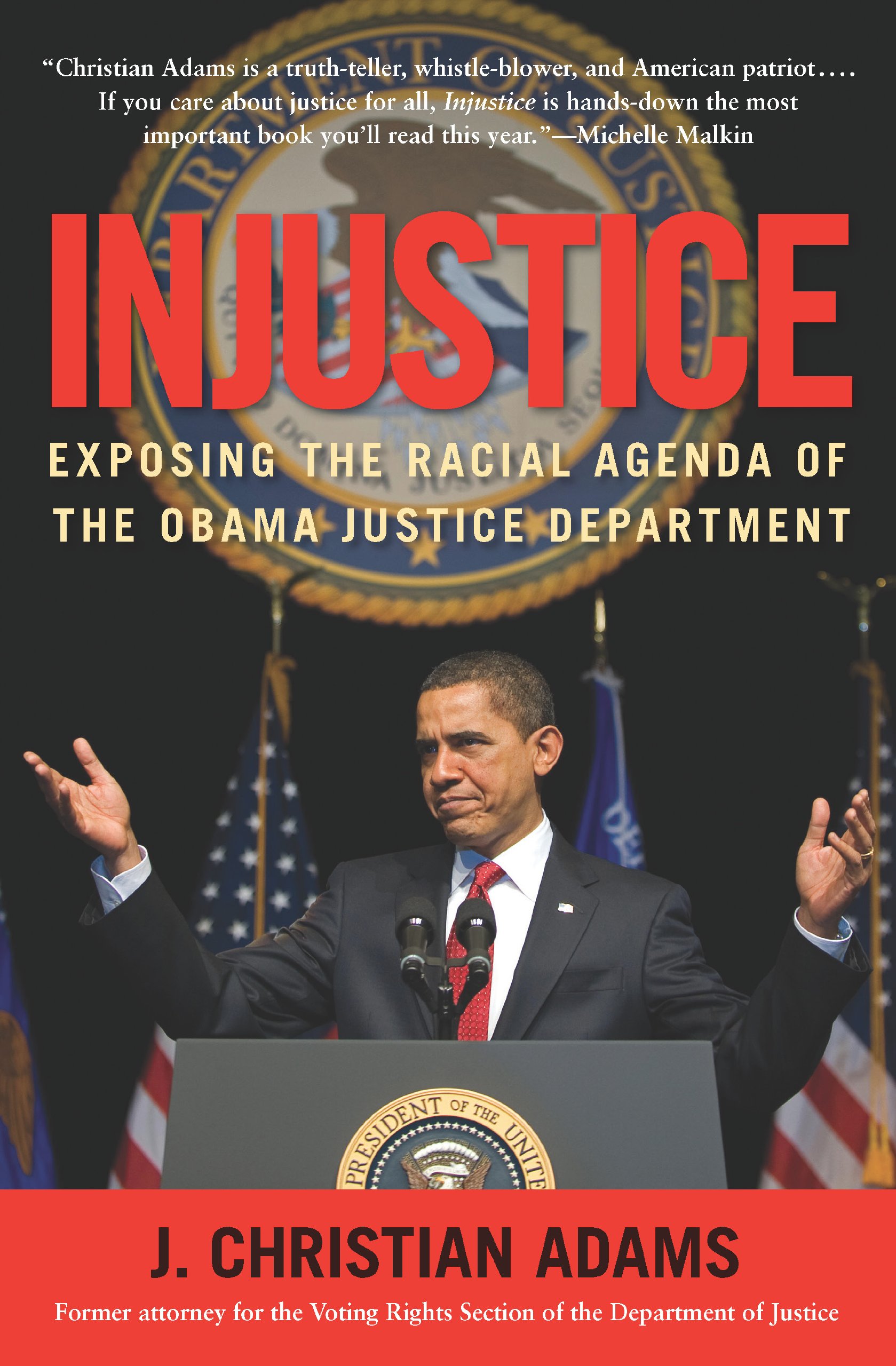 But, atrocious as Fast and Furious was, it is just the tip of the iceberg. In his excellent new book Injustice: Exposing the Racial Agenda of the Obama Justice Department

, J. Christian Adams goes beneath the surface to expose the whole massive mess.

Adams was a career attorney in the Justice Department. He resigned in protest over the New Black Panther cover-up.  During the 2008 elections, members of the New Black Panther Party in Philadelphia dressed in paramilitary gear, brandished batons, and warned white poll watchers “you are about to be ruled by the black man, cracker.” This was about as open and shut a case of voter intimidation as you can get. But, as Adams details, the Obama DOJ intentionally quashed the prosecution because it simply did not want to protect whites from violations by blacks.

Adams is a conservative Republican, but his book is far from a partisan screed. He quotes many honest liberals who were also outraged over the cover-up. One of the poll watchers who reported the intimidation was Bartle Bull, who litigated for black voting Rights under Robert Kennedy. Bull called the Black Panther case, “the most blatant form of voter intimidation I have encountered in my life…even going back to the work I did in Mississippi in the 1960s.”

And the other main whistleblower in the Obama DOJ is Chris Coates—a Clinton appointee who previously worked for the ACLU. Coates testified before the U.S. Civil Rights Commission about the Panther case. One voting section attorney named Avner Shapiro told Coates: “I didn’t come to work in the Civil Rights Division at the Justice Department to sue black people.” Coates commented that in the Obama DOJ there is a “hostile atmosphere…against race-neutral enforcement of the Voting Rights Act.”

Adams even quotes an official e-mail from a Voting section lawyer named Luz Lopez-Ortiz, who came to this country as an illegal alien, calling Coates a “Klansman.”

While Adams gives a great exposé of the Black Panther case, the book goes far beyond this incident. He gives a firsthand account of how race-obsessed the DOJ’s Civil Rights Division has become under Obama and Holder, and how this is manifested in many different areas.

The book opens up with a revealing story about Eric Holder. Since 1971, Eric Holder has kept a clipping from Harlem preacher Samuel Proctor with the words.

“Blackness is another issue entirely apart from class in America. No matter how affluent, educated and mobile [a black man] becomes, his race defines him more particularly than anything else…There is a sense in which every black man is as far from liberation as the weakest one if his weakness is attributable to racial injustice.”

While Holder was the Clinton-appointed U.S. Attorney for the District of Columbia, he explained that this meant

This alone should have disqualified Holder from being Attorney General. But amazingly, I had never even heard of this quote until reading this book.

Adams gives example after example of pure racial animus from top attorneys in the Obama DOJ:

Adams writes: “Nowhere is the disconnect between the American people and the Obama DOJ more apparent than in the DOJ’s attack on [SB 1070].” Adams calls Arizona the “New Alabama” because of the zealotry of the federal attack on it. He notes that Obama’s assault on Arizona’s stand against illegal immigration predates SB 1070. DOJ launched an investigation into Sheriff Joe Arpaio for his Official English policies in jail within two weeks of Obama’s inauguration. It has launched multiple lawsuits against him since.

Additionally, the Obama DOJ has gone after small towns like Carpentersville, IL and Farmers Branch, TX for English-only and anti-illegal alien laws.

Adams aptly sums up the attitude in the Obama DOJ to immigration:

“These open borders radicals interpret immigration policy purely through the lens of race. In their minds, racial animus is the only explanation why towns such as Farmers Branch and Carpentersville enacted their ordinances.”

Adams gives scores of other examples of the Obama DOJ’s racial agenda. Just a couple:

Adams writes from the perspective of a colorblind conservative. He still supports the stated goals of the early civil rights movement and praises Martin Luther King, Rosa Parks, and the NAACP. He even is somewhat deferential to the 1960s-era Black Panthers.

These qualifications may make a few VDARE.com readers roll their eyes. But it does not take away from the importance of Injustice.  Regardless if one comes from a race-realist or color-blind perspective, there can be no doubt that Eric Holder and Barack Obama’s Department of Justice is dedicated to trampling on the civil rights of White Americans.

In Injustice, Adams does a better job than anyone in documenting this reality. Of course, this explains why he has not been widely reviewed in the Main Stream Media.