Rep. Peter King, the Chairman of the Homeland Security Committee, has been getting thrashed by the liberal media for what appears to be a rather mild investigation of the obvious problem of growing Islamic violence within this country.

The Chairman’s treatment on MSNBC Tuesday morning was particularly harsh. Liberal polemicists like Eugene Robinson are downright competitive about how thick they can lay on invective. King gives as good as he gets, however.

Part 2 of the MSNBC punishment session is here.

Interestingly, the 2010 Senate hearing from Senators Lieberman and Collins got no such abuse, despite the similar topic: Nine Years after 9/11: Confronting the Terrorist Threat to the Homeland. Even though the title sounds wide ranging, much of the focus was on domestic recruitment: Officials: Homegrown terrorists troubling (AP, Sept 22, 2010).

At the urging of the Council of Islamic American Relations (CAIR), the lefty press has worked itself into a full froth about poor little Muslims being ”unfairly singled out” by Rep. Peter King. (Hint: free speech critical of Islam is not permitted under sharia law.)

CAIR intends that the ongoing noise keeps the absurd idea of Muslim victimhood alive, and distracts from the real danger that a fifth column poses. Not all Muslims are jihadists, but Muslim communities are the ocean in which the would-be killers swim.

Apparently the media snoozed through the march of attempted terror attacks in the last little while. As terror analyst Walid Phares noted last fall, ”According to open-source reports, between 2001 and 2008, U.S. agencies stopped one or two terror attempts a year. However, from 2009 until today, the government has been uncovering one or two cases a month, a troubling growth in jihadi activities.”

But to the unserious liberal press, the tender feelings of Muslims residing in America are more important than national security. The media further believes the fiction that Muslims are the frontline defense against bad guys in their communities, an idea with which Chairman King disagrees.

In fact, California CAIR recommended that Muslims not help the FBI, as a quickly removed web page revealed in January: 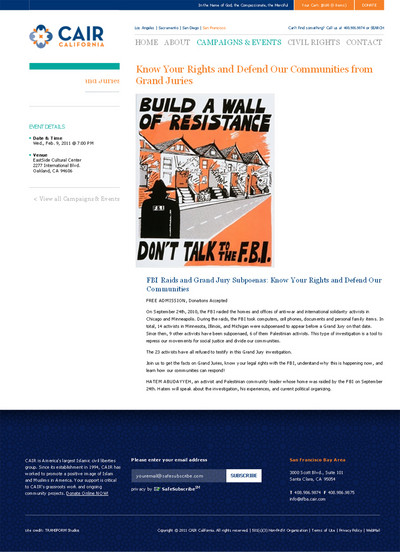 Such is the friendly diversity we have gained from increasing Muslim immigration!

Today however, a more agreeable Muslim, feminist reformer Asra Nomani, wrote that the hearing is a fine idea and even quoted some Islamic scripture to back up her point:

When I heard that Rep. Peter King (R-N.Y.) was going to hold hearings on the issue of radicalization inside our American Muslim community, I thought: It’s about time.

As those hearings begin on Thursday, all of us need to grab a front row seat. This is a discussion we desperately need to have as a nation because for far too long we have lived in a culture of denial, fueled in part by Muslim community leadership that—like just about any community tends to do until prodded—denies our problems rather than admits them.

I arrived in this country in 1969 as a four year old from India and, after 42 years as an American-Muslim, I can say without a doubt: an ideology of extremism has crossed across our borders, and radicalization is a real threat inside our communities in the U.S., often times unchallenged because members of our Muslim community are intimidated to speak out against it. We have brave leaders and activists who do, but usually at great cost to their social standing in the community.

To me, the hearings are not a ”witch hunt.” Rep. Peter King is not a 21st century Joe McCarthy, the senator who led hearings on communism in the 1950s. I believe he is an American, like so many, frustrated and annoyed by the largely recalcitrant posture of our community to admitting our problems. In Congress, we have had honest debate about everyone’s dirty laundry—from BP to the Big Three automakers. There has been discussion in the halls of Congress about ”Jewish extremists,” ”white supremacists,” the Ku Klux Klan and clergy sexual abuse in the Catholic Church. Muslims should not be exempt from critical examination, just because its lobby takes a defensive posture—just like all special-interest groups tend to do.

If we have any doubts, as Muslims, about our divine injunction to truth-telling, even about our own community, we need look no further than the Qur’an, which states:

For justice, as witnesses

To God, even if it may be against

Yourselves, or your parents

Instead of circling the wagons with a public relations campaign of victimization, Muslims should rise to the occasion and honestly discuss what we all know: there is a very real interpretation of Islam inside our communities that threatens to convert our youth and others to extremism. It is expressed through publishing houses, imams, YouTube videos, websites and arm-chair ideologues.

We need to have an open conversations about how extremist Islam gets into the heads of Muslims such as would-be Time Square bomber Faisal Shahzad, Fort Hood shooter Major Nidal Hassan and so many others. We need to own up to the fact that some within Islam have a problematic interpretation, and we need to have the moral courage to be honest about it. We will not shame ourselves. We will not shame Islam. There is no shame in honesty. In fact, I think we would engender more good will—and invite less anger and rage by folks frustrated by our stonewalling.

Like most Muslims, I’ve seen rigid, puritanical interpretations creep into the American Muslim community, starting in the 1970s with the exportation of the dogmatic Wahhabi ideology from Saudi Arabia, fueled by the oil money that gave the Saudis a largess from which to pump its ideas into the world. In my hometown community of Morgantown, W.V., I saw the Saudi ideology express itself with mandates that women and men sit strictly segregated from each other at our community potluck dinners, rather than the family style arrangements we’d been enjoying. I felt a crisis of faith and didn’t think there wasn’t a place for me as I came of age as a fierce, strong-willed girl.

For most of my life I quietly bypassed traditions instead of directly challenging them. I distanced myself from the Muslim community, just like many of us do when we see dangers in our community that seem easier to ignore than challenge. With 9/11, I had my wake up call; then, on Jan. 23, 2002, my friend, Wall Street Journal bureau chief Daniel Pearl, was kidnapped by Muslim militants in Pakistan and later beheaded by Khalid Sheikh Mohammed, the self-described 9/11 mastermind.

I recognized that the stakes were huge for how Muslims expressed themselves in the world. Muslims like me sat silently while militants wrenched the religion from us and declared they were the protectors of the faith. I went on the pilgrimage to Mecca, and, in Saudi Arabia, I saw first-hand the exit ramp that told ”non-Muslims” that they couldn’t enter Mecca. In Mecca, I realized how far we had departed from the Islamic principles of social justice, women’s rights or tolerance that my parents had taught me.

My immersion into darkness and my experience in the light of the hajj transformed me. It made me recognize that we each have a role in standing up to the extremists in my religion who try to intimidate us into respecting and following them. Starting in 2003, at my mosque in Morgantown, my family and I challenged the interpretations of Islam that assigned women the back door and led our imam to tell us we couldn’t be friends with the Jews and the Christians. When my family and I challenged the community to tackle our problems with radicalization, what happened? The men at the mosque voted to put me on trial to be banned from the mosque, they fired my father from the board and other families disinvited our family from potluck dinners. Today, as part of a Pray In movement, other women and I are thrown out of mosques in the Washington, D.C., area because we refuse to pray in the second-class areas reserved for women.

For far too long, our nation has had a politically correct stance when it comes to the question of militancy, extremism and radicalization inside Islam. In the name of interfaith dialogue, we have pulled our punches on the very serious and real issues of extremist interpretations of Islam, issuing feel-good statements such as, ”Islam is a religion of peace.” We try to be polite and not offend. So many well-intentioned people who are critics about issues inside their own faiths are joining the bandwagon, trying to defend Islam and Muslims, as if the faith and the community are monolithic, but our best defense, I believe, is honesty about the good, bad and ugly.

The purpose of religion is to inspire in us the best of human behavior. That includes truth-telling.