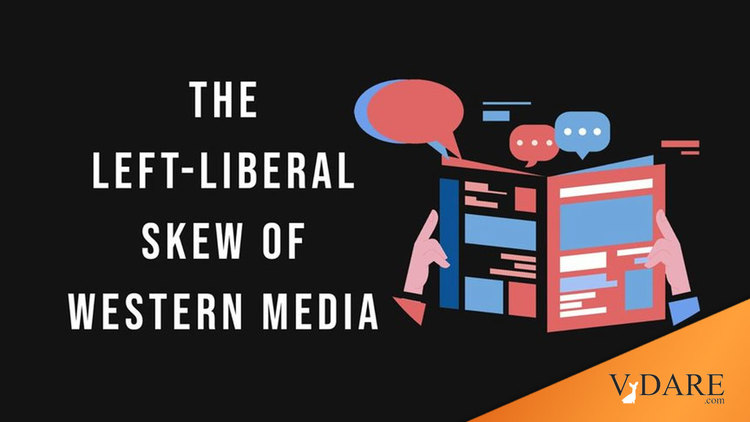 IT'S OFFICIAL: Leftist Journalists Are An International Disease

Donald Trump infamously triggered the corporate media by referring to them as “Fake News.” Perhaps in their hearts they knew it to be true. The entire industry is, with few exceptions, institutionally leftist, and does all it can—as it did with Joe Biden—to get Leftists elected. And now there is hard evidence, in the form of an important new study by independent scientist Emil Kirkegaard [Tweet him], that this problem exists in every developed country.

The study, The left-liberal skew of Western media, was published in the very mainstream Journal of Psychological Research, July 2021. Kirkegaard has a YouTube commentary on it below:

Kirkegaard garnered international media attention in 2016 when he scraped the OkCupid dating site for its mountains of (then) publicly available and fascinating data. The results are still being analyzed but, for example, it's proven beyond doubt that religiosity is inversely correlated to IQ [Intelligence and Religiosity among Dating Site Users, by Emil O. W. Kirkegaard and Jordan Lasker, Psych, December 18, 2019.

This scientifically useful act was described by one academic as “one of the most grossly unprofessional, unethical and reprehensible data releases I have ever seen” [Researchers just released profile data on 70,000 OkCupid users without permission, by Brian Resnick, Vox, May 12, 2016]. I regard this as part of the academic establishment’s war against “open science” that even “bravery signalers” like the much touted Kathryn Paige Harden engage in.

Another of the new media study’s coauthors: Dr. Noah Carl [Tweet him], who was fired for Crimethink by Cambridge University in 2018. (There was an out-of-court settlement.)

Kirkegaard et al. show that the Main Stream Media is overwhelmingly left-wing in 17 Western countries where data was available and they imply that the MSM impacts election results by manipulating the public to vote for the Left. We are yet to see how MSM journalists will describe this interesting news.

The research team’s method was beautifully simple. They gathered survey data, usually not yet translated into English, on the political views of journalists in 17 Western countries. They then matched these data to results of national elections, allowing them to compare the journalists’ views to data on the different publics’ views, and they constructed metrics of journalists’ relative preferences for different political parties.

They found that being a journalist correlated with supporting a left-wing party at about 0.5. This is quite a strong correlation. To put it in perspective, how intelligent you are correlates with how educated you are, in terms of your highest academic qualification, at 0.5 as well. And it is intuitively obvious that, in general, smarter people tend to be more likely to go to college and to grad school [see The g Factor, by Arthur Jensen, 1998].

Kirkegaard and his colleagues also found that, much to the same extent, journalists are more likely than the general population to support “certain ideologies, namely environmentalism, feminism, social liberalism, socialism, and support for the European Union.”

So, to be clear, journalists are pro-mass immigration and pro–Open Borders, as this is what the EU represents.

More specifically than this, using computer modelling, the team found that the most consistent predictors of being a journalist in a Western country—predictors with “non-trivial effect sizes”—were “conservative” (negative), “nationalist” (negative), and “Green” (positive). In other words, journalists are very much more likely,than the general population in which they operate (I would say “which they serve,” but that would clearly be a lie) to be anti-nationalist (so pro-immigration), anti-conservative and pro-Green.

Journalists are also more likely than the general population to favor self-righteous and utterly irresponsible groups such as “Extinction Rebellion” and “Insulate Britain,” who have recently blocked English highways by gluing themselves to the road, preventing ambulances from reaching patients, stopping people from visiting seriously ill relatives [BLOCKHEADS: I would block ambulance with dying patient, says Extinction Rebellion founder after eco-warriors spark traffic chaos, by Britta Zeltmann, The Sun, October 4, 2021].

To a less pronounced degree, journalists are anti-Christian, anti-populist and anti–direct democracy (such as referendums, where voters often seem to reject Leftist ideas) and they are pro-Communism and pro-Socialism.

The researchers say they

computed estimates of the skew of journalists’ political views in different countries. Overall, our results indicate that the Western media has a left-liberal skew.

Kirkegaard’s study is not the first one to find this, but it is the first one to use direct survey data, where other studies have had to rely on inference. For example, his research team cited a study that looked at the most common words and phrases used in Congress and coded them as being more likely to be employed by Democrats or more likely to be utilized by Republicans. These were then compared to words and phrases most frequently used in the U.S. media. The result: the U.S. media is clearly biased to the Democrats [What Drives Media Slant?, by M. Gentzow & J. Shapiro, Econometrica, 2010].

Kirkegaard’s study also looked at how biased Wikipedia is in the sample countries —Wikipedia, of course, exists in multiple languages—by such means as comparing Wikipedia’s understanding of which parties are “far right” to the views of a sample of the population. Result: Wikipedia is far more likely to classify a political party as “Far Right” than is the general public. In all countries, the MSM and Wikipedia were more leftist than the public. The correlation between the Leftism of the media and the Leftism of a country’s Wikipedia was 0.86—extremely strong. 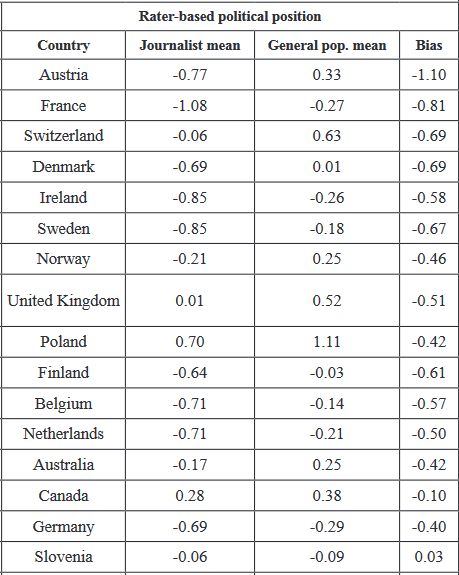 Is there any solution?

We need an alternative media that is so excellent and all-encompassing that the “Mainstream'” is abandoned. There were signs that this was happening in the middle of the last decade, which is probably why the corporate media has been cheering on internet censorship. But there is a countervailing trend: corporate news managers are insisting on putting up paywalls. This will create a niche by driving people towards free sites, which will tend to remain free because they are motivated by ideology and principle.