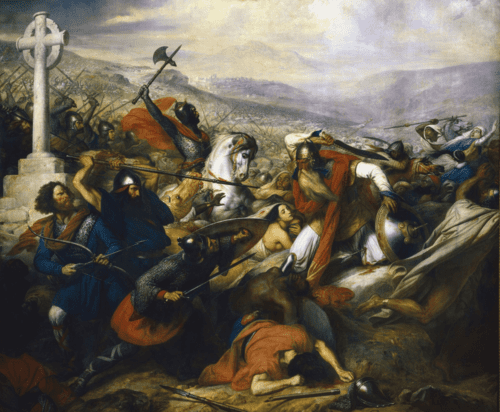 Islam and the West: An Irreconcilable Conflict?

"I worry greatly that the rhetoric coming from the Republicans, particularly Donald Trump, is sending a message to Muslims here ... and ... around the world, that there is a 'clash of civilizations.'"

Yet, that phrase was not popularized by Donald Trump, but by Harvard's famed Samuel Huntington. His "The Clash of Civilizations and the Remaking of World Order" has been described by Zbigniew Brzezinski as providing "quintessential insights necessary for a broad understanding of world affairs in our time."

That Clinton is unaware of the thesis, or dismisses it, does not speak well of the depth of her understanding of our world.

Another attack on Trump, more veiled, came Monday in an "open letter" in The Washington Post where four dozen religious leaders, led by Cardinal Theodore McCarrick, charge "some politicians, candidates and commentators" with failing to follow Thomas Jefferson's dictum:

"I never will, by any word or act ... admit a right of inquiry into the religious opinions of others."

Intending no disrespect to Jefferson, if you do not inquire "into the religious opinions of others" in this world, it can get you killed.

"We love our Muslim siblings in humanity," said the signers of Cardinal McCarrick's letter, "they serve our communities as doctors, lawyers, teachers, engineers, journalists, first responders, and as members of the U.S. Armed forces and Congress."

Undeniably true. But, unfortunately, that is not the end of the matter.

Did the worst attack on the United States since Pearl Harbor, 9/11, have nothing to do with the Islamic faith?

Did Fort Hood and the San Bernardino massacres, the London subway bombings and the killings at Charlie Hebdo, as well as the slaughter at the Bataclan in Paris, have nothing to do with Islam?

Does the lengthening list of atrocities by terrorist cells of ISIS, Boko Haram, al-Qaida, al-Shabaab and the Nusra Front have nothing to do with Islam? Is it really illiberal to inquire "into the religious opinions" of those who perpetrate these atrocities? Or is it suicidal not to?

There has arisen a legitimate question as to whether Islamism can coexist peacefully with, or within, a post-Christian secular West.

For, as the Poet of the Empire, Rudyard Kipling, wrote: "Oh, East is East and West is West, and never the twain shall meet, Till Earth and Sky stand presently at God's great Judgment Seat."

As of 1960, the Great Wave of immigration into the United States from Southern and Eastern Europe had been halted for 35 years. And the children of these millions had been largely assimilated and Americanized.

Yet, 50 years after the Turkish gastarbeiters were brought in the millions into Germany, and Algerians and other North Africans were brought into France, no such wholesale assimilation had taken place.

Why not? Why are there still large, indigestible communities in France where French citizens do not venture and French police are ever on alert?

What inhibits the assimilation that swiftly followed the entry of millions of Catholics, Orthodox Christians and Jews into the United States from 1890 to 1920? Might it have something to do with Islam and its inherent resistance to a diversity of faiths?

Set aside faith-based terrorism and Islamist terrorism, and consider the nations and regimes of the Middle and Near East.

Iran holds presidential elections every four years, but is a Shiite theocracy where the Ayatollah is a virtual dictator. Saudi Arabia is a Sunni kingdom and home to Wahhabism, a Sunni form of puritanism.

Those ruling regimes are rooted in Islam.

And while secular America embraces expressions of religious pluralism and sexual freedom, homosexuality and apostasy are often viewed as capital crimes in Afghanistan, Iran and Saudi Arabia.

Where Islam is the ruling faith, the Quran is secular law.

Catholic historian Hilaire Belloc saw our future on its way, even before World War II: "[I]n the contrast between our religious chaos and the religious certitude still strong throughout the Mohammedan world ... lies our peril."

Historically, Christianity came to dominate the Roman Empire through preaching, teaching, example and martyrdom. Islam used the sword to conquer the Middle and Near East, North Africa and Spain in a single century, until stopped at Poitiers by Charles Martel.

And this is today's crucial distinction: Islam is not simply a religion of 1.6 billion people, it is also a political ideology for ruling nations and, one day, the world.

To the True Believer, Islam is ultimately to be imposed on all of mankind, which is to be ruled by the prescriptions of the Quran. And where Muslims achieve a majority, Christianity is, at best, tolerated.

Nor is this position illogical. For, if there is no God but Allah and Muhammad is his Prophet, all other religions are false and none can lead to salvation. Why should false, heretical and ruinous faiths not be suppressed?

Behind the reluctance of Trump and other Americans to send another U.S. army into a region that has seen wars in Iraq, Libya and Afghanistan leave us with ashes in our mouths, lies a wisdom born of painful experience.

Patrick J. Buchanan needs no introduction to VDARE.COM readers; his books State of Emergency: The Third World Invasion and Conquest of America, and Suicide of a Superpower: Will America Survive to 2025? are available from Amazon.com. Patrick J. Buchanan is the author of the new book “The Greatest Comeback: How Richard Nixon Rose From Defeat to Create the New Majority."