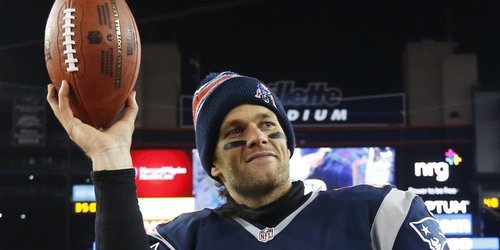 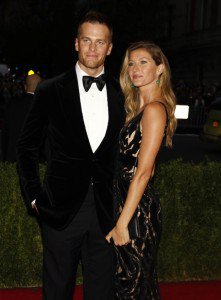 In a black dominated sport, white quarterback Tom Brady stands out. With his supermodel wife (Gisele Bundchen, right) and clean cut looks, he’s the Christian Laettner of the NFL, a skilled player commentators and players nonetheless mock as a “dork” and a “cornball” who “can’t dance” [Bart Scott: ‘Nothing tough about Tom Brady… he looks like a dork’, by Ryan Wilson, CBS Sports, October 1, 2015]. Brady is a friend of Donald Trump and was even identified by the press as a Trump supporter [Tom Brady: Comments on Donald Trump were taken out of context, by Ryan Wilson, CBS Sports, September 30, 2015]

Now, Brady is being targeted as the NFL’s Great White Defendant in an attempt to distract from how the rest of the league has become, in Rush Limbaugh’s words, “the Bloods and the Crips without any weapons” [The Classless NFL Culture, Rush Limbaugh Show, January 19, 2007].

During the offseason, the NFL suspended Tom Brady for four games and fined the New England Patriots two future draft picks because Brady supposedly directed team personnel to deliberately deflate several footballs just prior to the 2015 AFC Championship game against the Indianapolis Colts.

The deflated footballs didn’t impact the outcome of the game. The referees reinflated the balls at halftime and Brady proceeded to tear up the Colts’ defense for 28 unanswered points in a driving rainstorm.

Several former NFL quarterbacks have argued that air pressure in footballs is a matter of personal preference, not an unfair advantage [Former NFL quarterbacks talk Deflategate, by Jim Corbett, USA Today, January 21, 2015]. And yet the NFL bizarrely compared throwing a slightly underinflated football to the use of anabolic steroids [Judge Berman slams NFL’s comparison between using steroids and deflating footballs, by Henry McKenna, Boston.com, September 3, 2015]

Tom Brady, as NFL Commissioner Roger Goodell has repeatedly put it, damaged “the integrity of the game” [NFL releases statement on Patriots’ violations, NFL, May 11, 2015].

Nevertheless, as usual with trumped-up charges against whites, we now enter Narrative Collapse. It was initially alleged eleven of the Patriots’ footballs were deliberately underinflated, but it now appears it was only a single football [Report: Only one of Patriots’ 12 balls were under-inflated by two pounds, Sports Illustrated, February 1, 2015]. Moreover, the referee who weighed the balls did not actually record any of the measurements. He only testified to the air pressure levels from memory.

According to statements by Colts’ general manger, Ryan Grigson, the NFL front office decided to perform a sting operation to catch Brady ordering the deflation of footballs before the game. The league denied this, but its story doesn’t hold up [There’s a glaring contradiction in NFL’s Deflategate timeline, by Bart Hubbuch New York Post, February 20, 2015].

My two cents: NFL Commissioner Goodell is attempting to insulate himself, the league, and the almost entirely all-white owners, from charges of over-disciplining black players by nailing a high-profile white player [Brandon Marshall: White players treated differently when it comes to NFL discipline, by Zac Johnson, NBC Sports, September 9, 2015]

But the NFL’s real dirty secret: the league systematically covers up players’ misdeeds, with some teams even employing handlers to keep a lid on unruly players when necessary and clean up after them if possible [For battered NFL wives, a message from the cops and the league: Keep quiet, by Simone Sebastian and Ines Bebea, The Washington Post, October 17, 2014]. 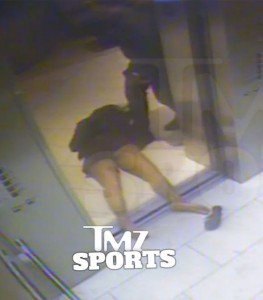 But the culture of silence occasionally fails—most recently in the case of Baltimore Ravens tailback Ray Rice. Rice knocked out his then-fiancé (now wife) in an Atlantic City hotel elevator. After Rice’s arrest, Commissioner Goodell suspended him for a mere two games. However, TMZ eventually obtained and aired the video of Rice dragging his beloved from the elevator like a sack of potatoes [Elevator Knockout, September 8, 2014]. Under pressure, Goodell was forced to suspend Rice indefinitely.

Goodell claimed that he did not realize the violent nature of the assault. But the evidence indicates that Ray Rice actually told Goodell the full truth about what happened and the videotape didn’t contradict his story [Transcript shows inconsistencies in Goodell’s testimony on Rice matter, by Don Van Notta Jr., ESPN, December 10, 2014]. A federal judge agreed and eventually vacated Rice’s suspension [Federal justice finds Goodell’s Story Was a Lie, Immediately Reinstates Ray Rice to NFL, by Judd Legum, ThinkProgress, November 28, 2014].

Many people called for Roger Goodell’s resignation in the wake of the Ray Rice scandal, but Goodell survived by vowing a league-wide crack down on misbehavior among players [Domestic violence and the NFL: What Impact Has the League Made? By Jane McManus, ESPN, January 28, 2015]

Image is everything when you depend on advertising revenue. But you have another problem when most of the bad behavior comes from black players, who make up almost 70% of the rosters.

Tom Brady is thus ideally suited to serve as a scapegoat and distract the public from a Politically Incorrect truth.

To put the crusade against Brady in context, consider the case of former Baltimore linebacker Ray Lewis. After a Super Bowl Party in Atlanta in 2000, Ray Lewis and his friends allegedly stabbed two men to death after a Super Bowl party. The blood of one of the victims was found inside Lewis’s limousine and the white suit that Lewis was wearing that night—a suit reportedly drenched with blood—was never found. Prosecutors believed Lewis ditched it in a dumpster after the incident [Inside tale of Ray Lewis parking-lot brawl homicide case, by Maureen Callahan, New York Post, January 27, 2013]. 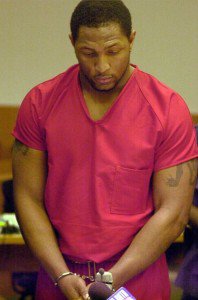 Lewis, right,  was charged with two counts of murder, but was able to plead guilty only to obstruction of justice in exchange for testifying against his accomplices. His testimony never directly implicated his friends and they were acquitted. [Slayings not forgotten, Ray Lewis not forgiven, by Brent Schrotenboer, USA Today, June 18, 2013].

Nevertheless, despite his being involved in a double homicide, Roger Goodell fined Ray Lewis a mere $250,000 for the incident and didn’t suspend him for a single game. [Pro Football: N.F.L. hands Ravens’ Lewis a Fine of $250,000 but doesn’t suspend him, by Mike Freeman, New York Times, August 18, 2000]. Lewis was named Super Bowl MVP the following year, and is destined for the NFL Hall of Fame.

In 2013, Roger Goodell called Ray Lewis “a tremendous voice of reason” and hinted that he had taken advice from Lewis on player relations: “He’s someone that has a unique pulse of the players and that’s helpful to me.” [Roger Goodell says he'll continue to use Ray Lewis as a sounding board, by Jeff Zrebiec, The Baltimore Sun, January 03, 2013]

Meanwhile, the NFL is committed to persecuting Brady even though it’s increasingly appearing that it never had any evidence against him.

To his credit, Tom Brady did not back down and took the NFL to federal court. A judge virtually laughed the NFL’s case out of court and vacated Brady’s suspension [Brady’s Deflategate suspension tossed; judge mocks Goodell, by Josh Saul, David K. and Bart Hubbuch, New York Post, September 3, 2015]

The Great White Defendant Strategy is a tempting way for cowardly whites to conceal Politically-Incorrect realities. But it often backfires on them, as it did against Mike Nifong in the Duke Lacrosse Case.

Nevertheless, that isn’t stopping the NFL. Instead, the NFL front office recently returned to court to file an appeal against the judge’s decision to dismiss their case against Tom Brady—an appeal they will most surely lose [NFL files motion seeking expedited hearing on Tom Brady appeal, ESPN, September 25, 2015]

Some people never learn. And. as we can practically guarantee future viral videos of the NFL’s African-American players behaving badly, the persecution of Brady will do nothing to conceal the truth about the league’s Color of Crime.