Is Scarborough Shoal Worth a War?

Should we back down, says Aquino, the United States will lose its "moral ascendancy, and also the confidence of one of its allies."

And what is Scarborough Shoal?

A cluster of rocks and reefs, 123 miles west of Subic Bay, that sits astride the passageway out of the South China Sea into the Pacific, and is well within Manila's 200-mile exclusive economic zone.

Beijing and Manila both claim Scarborough Shoal. But, in June 2013, Chinese ships swarmed and chased off a fleet of Filipino fishing boats and naval vessels. The Filipinos never came back.

And now that China has converted Fiery Cross Reef and Mischief Reef into artificial islands with docks and air bases, Beijing seems about to do the same with Scarborough Shoal.

"Scarborough is a red line," says Gregory Poling of the Center for Strategic and International studies. To allow China to occupy and militarize the reef "would clearly change the balance of power."

Really? But before concluding that we must fight to keep China from turning Scarborough Shoal into an island base, there are other considerations.

High among them is that the incoming president of the Philippines, starting June 30, is Rodrigo Duterte, no admirer of America, and a populist authoritarian thug who, as Mayor of Davao, presided over the extrajudicial killing of some 1,000 criminals during the 1990s.

Duterte, who has charged Aquino with treason for abandoning Scarborough Shoal, once offered to set aside his country's claim in exchange for a Chinese-built railroad, then said he might take a jet ski to the reef to assert Manila's rights, plant a flag and let himself be executed to become a national hero.

In a clash with China, this character would be our ally.

Indeed, the rise of Duterte is yet another argument that, when Manila booted us out of Subic Bay at the Cold War's end, we should have dissolved our mutual security pact.

This June, an international arbitration tribunal in The Hague will rule on Manila's claims and China's transgressions on reefs that may not belong to her. Beijing has indicated she will not accept any such decision. 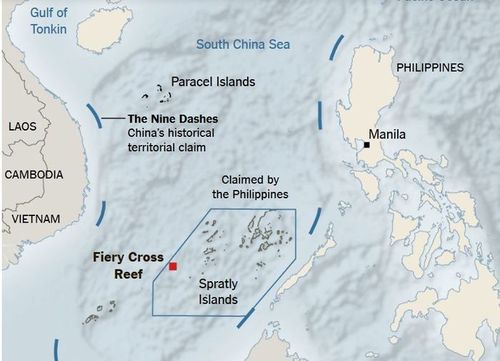 So, the fat is in the fire. And as the Chinese are adamant about their claims to the Spratly and Paracel Islands and virtually all the atolls, rocks and reefs in the South China Sea, and are reinforcing their claims by creating artificial islands and bases, the U.S. and China are headed for a collision.

U.S. warships and reconnaissance planes passing near these islets have been repeatedly harassed by Chinese warplanes.

Vietnam, too, has a quarrel with China over the Paracels, which is why President Obama is being feted in Hanoi and why he lifted the ban on arms sales. There is now talk of the Navy's return to Cam Ranh Bay.

But before we agree to support the claims of Manila and Hanoi against China's claims, and agree to use U.S. air and naval power if needed, we need to ask some hard questions.

What vital interest of ours is imperiled by who owns, or occupies, or militarizes Scarborough Shoal? If U.S. rights of passage in the South China Sea are not impeded by Chinese planes or ships, why make Hanoi's quarrels and Manila's quarrels with China our quarrels?

Vietnam and the Philippines are inviting us back to our old Cold War bases for a simple reason. If the Chinese use force to back up their claims, Hanoi and Manila want us to fight China for them.

But, other than a major war, what would be in it for us?

And if, after such a war, we have driven the Chinese off these islets and destroyed those bases, how long would we be required to defend them for Hanoi and Manila?

Have we not enough war guarantees outstanding?

We are moving NATO and U.S. troops into Eastern Europe and anti-missile missiles into Poland and Romania, antagonizing Russia. We are fighting in Afghanistan, Iraq, Syria, Libya, and Yemen, and, if the neocons get their way, we will soon be confronting Iran again.

Meanwhile, North Korea is testing nuclear warheads for long-range missiles that can reach the American homeland.

And no vital U.S. interest of ours is imperiled in the South China Sea.

Should Beijing insanely decide to disrupt commercial traffic in that sea, the response is not to send a U.S. carrier strike group to blast their artificial islands off the map.

Better that we impose a 10 percent tariff on Chinese-made goods, and threaten an embargo of all Chinese goods if they do not stand down. And call on our "allies" to join us in sanctions against China, rather than sit and hold our coat while we fight their wars.

This economic action would send China's economy into a tailspin, and the cost to Americans would not be reckoned in the lives of our best and bravest.