Is ISIS Coming to Damascus? 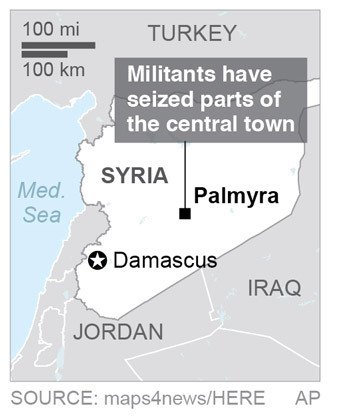 Who rises if Assad falls?

That question, which has bedeviled U.S. experts on the Middle East, may need updating to read: Who rises when Assad falls?

For the war is going badly for Bashar Assad, whose family has ruled Syria since Richard Nixon was president.

Assad's situation seems more imperiled than at any time in this four-year civil-sectarian war that has cost the lives of some 220,000 soldiers, rebels and civilians, and made refugees of millions more.

Last month, ISIS captured Palmyra in central Syria, as it was taking Ramadi in Iraq. A coalition, at the heart of which is the al-Qaida-linked Nusra Front, seized Idlib province in northern Syria and is moving toward the coast and Latakia.

Some 100 Russian military advisers are said to have pulled out of Syria, suggesting Vladimir Putin may be reconsidering Russia's historic investment.

Indicating the gravity of the situation, Syrian sources claim 7,000 to 10,000 foreign Shiite fighters, Iraqi and Iranian, have arrived to defend Damascus and launch an offensive to recapture Idlib.

Israel's deputy chief of staff, Gen. Yair Golan, who headed the Northern Command, was quoted this week, "The Syrian Army has, for all intents and purposes, ceased to exist."

Israeli sources report that Hassan Nasrallah, leader of Hezbollah, Assad's indispensable ally, is warning that the real threats to the Shiites of Lebanon are ISIS and the Nusra Front. Fighting between Hezbollah and Syrian rebels is taking place along the Lebanese-Syrian border.

Assad has been written off before, only to survive those who predicted his demise. But given the balance of forces and the way in which the tide of battle is turning, it is hard to see how his regime and army can long resist eventual collapse.

Arrayed against him are not only the Nusra Front and ISIS, which are attracting recruits from abroad, but also Turks, Saudis and Gulf Arabs, who have been clandestinely aiding Sunni rebels we regard as terrorists.

Though the Turks have a half-million-man army, 3,000 tanks, 1,000 military aircraft, and are 60 miles from the ISIS capital of Raqqa in Syria, our NATO ally refuses to move. Turkey's president sees Assad as an ally of Iran.

The Israelis, too, see Assad as an ally of Iran and a greater enemy than an ISIS or Nusra Front with no army to threaten Israel. They have been aiding Syrian rebels on the Golan.

It is difficult to see where the Assad regime and army, under attack within and without, will get the recruits to defend that half of Syria they still hold, let alone reunite the country.

And who will seize power in Damascus?

Right now the rival claimants would appear to be the Nusra Front, an offshoot of al-Qaida that brought down our twin towers, and ISIS, the death cult famous for the barbarity of its executions.

According to the New York Times on June 4, ISIS is "emerging as a social and political movement," preparing to govern its caliphate.

Interviewed by CBS News, Gen. David Petraeus said the United States is "probably losing" the war to ISIS, and we need more U.S. troops in Iraq or we run "the risk of losing the fight."

Now consider what the general is saying:

America should send her best and bravest back into Iraq to defeat ISIS, while Turkey, the Saudis, the Gulf Arabs and Israel are helping bring about the defeat of a Syrian army that has been battling ISIS for years.

Our "friends" in the Middle East have no problem with us fighting and dying to drive ISIS out of Iraq, while they try to bring about the fall of Assad in Syria, which would constitute a triumph for ISIS.

A collapse of Assad's army could give ISIS control of Syria.

Our "friends" don't mind this happening because it would be a defeat for Iran and the Shiite Crescent, their enemies, even if it meant a victory for ISIS and al-Qaida, our enemies.

It is time we stopped letting other nations pick the enemies for us to fight. And as our "friends" are looking out for themselves first, last, and always, let us Americans begin to do the same.