What the Fall of Ramadi Means 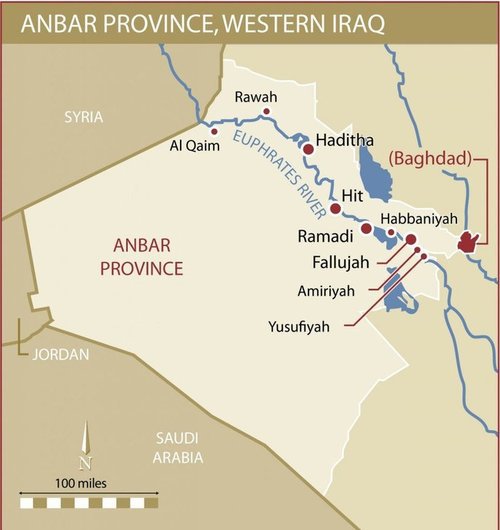 The fall of Ramadi, capital of Anbar, largest province in Iraq, after a rout of the Iraqi army by a few hundred ISIS fighters using bomb-laden trucks, represents a stunning setback for U.S. policy.

When President Obama declared that we shall "degrade and defeat" the Islamic State, he willed the ends, but not the means. The retreat from Ramadi makes clear that the Iraqi army, even backed by 3,000 U.S. troops, cannot drive ISIS out of Anbar and Mosul and back into Syria.

Republicans are almost gleeful in charging that Obama's withdrawal of U.S. forces from Iraq created the vacuum the Islamic State has now filled.

Blaming Obama for ISIS in Iraq is shaping up to be the 2016 GOP attack line. But when it comes to the critical question—do Republicans favor reintroducing U.S. ground troops to retake Ramadi and Mosul and drive ISIS back into Syria?—no credible GOP presidential candidate is clamoring for a return to Mesopotamia.

None of the mice wants to bell that particular cat.

Yet, absent American leadership and U.S. troops, who is going to expel the Islamic State? The only forces in Iraq able to attempt that are the Shiite militias whose sectarian barbarity is exceeded only by that of ISIS itself.

America's choices in Iraq, none good, come down to these:

One: Reintroduce 10,000 ground troops and Marines to retake Ramadi and Anbar, and thousands more to retake Mosul and cleanse Iraq of ISIS. Another surge, like 2007.

Yet that does not solve the problem of the Islamic State, which would retreat to Syria and wait for the Americans to leave Iraq again.

Two: Adopt a policy of degrade-and-contain by continuing air strikes on the Islamic State in Iraq, while training and backing the Iraqi army and Kurds in keeping ISIS out of Baghdad and Irbil.

Three: Accept the inevitable—that the Shiite-led Iraq we created by dethroning Saddam and smashing his Baathist state and army is going to be in the orbit of Iran. For we cannot now, without a major and indefinite reintroduction of U.S. forces, alter the existing balance of military and political power in Iraq.

Before the United States replicates the epochal blunder Bush II and the neocons committed, we should look hard at the realities of Iraq and the region, as we failed to do before we invaded.

The relevant realities are these.

First, the Iraqis are incapable of reuniting and pacifying their country themselves. To hold Iraq together and keep it out of Iran's sphere would require a large and indefinite presence of U.S. forces.

How much more American blood and treasure is that worth?

Second, while the reintroduction of U.S. ground forces may be cheered by our Western allies, no NATO troops will be there beside us. As far as the West is concerned, Iraq is America's problem.

Nor will the Turks, Jordanians, Saudis or Gulf Arabs be sending troops to fight ISIS in Iraq or Syria. For them, the greater long-term dangers are: Iran, Hezbollah, Bashar Assad's Syria, Shiite Baghdad, and the Houthi rebels of Yemen, the so-called Shiite Crescent.

Another reality is that neither Syria, nor Iraq, nor Libya, nor Yemen is likely, soon, to be brought together as a unified nation-state under a government supported by a great majority of its people.

Any regimes that rise in the capitals of these four nations seem certain to be seen by a significant slice of the population as illegitimate, and valid targets for revolutionary violence.

The Middle East is becoming a basket of failed states. And as we look around that region, every country is looking out for No. 1.

The Turks looked the other way as volunteers entered Syria to join ISIS. The Turks then let Kurds cross into Syria to keep ISIS out of Kobane. Now, according to Assad, the Turks are aiding al-Qaida (the Nusra Front) in establishing its own caliphate in Idlib. The Saudis and Gulf Arabs also, says Assad, aided the Nusra Front in taking Idlib.

And what of us?

Considering the millions of dead, wounded, uprooted, homeless, sick and suffering, American-born and native-born, have our wars and bombings in Afghanistan, Iraq, Syria, Libya, Yemen been, on balance, more a blessing than a curse to the people we went to help?

Before we plunge back into these Middle East wars from which, at long last, we have begun to extricate ourselves, we ought to recall the words of that anonymous U.S. officer in Vietnam:

"We had to destroy the village—in order to save it."