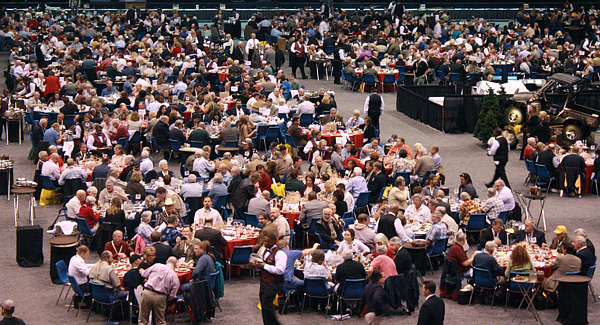 Just another day in urban America:

A 16-year-old boy has been arrested and charged as an adult with the senseless murder of a 24-year-old newlywed and father-to-be while he was taking a walk last week in Indiana.

Simeon Adams was found hospitalized with a gunshot wound to his neck only hours after the fatal shooting of Nathan Trapuzzano on April 1, according to Indianapolis police.

The software engineer who was expecting his first child next month was taking a morning walk just before 6 a.m. when Adams allegedly shot him twice in a suspected robbery.

Think about this: Indianapolis has seen another rash of homicides this year, the vast majority of them tied to guns….This city should be waging a war against the illegal possession of guns; instead, we get relative silence.

Speaking of crime, what I would do for an elected leader in this community to lead an honest conversation about what it truly will take to address the problem. We need hundreds of new police officers, as well as a substantial upgrade in prisoner re-entry programs, and both will cost dollars. Big dollars.

It’s worth it. But our top leaders need to make that sale, and they need to be willing to talk about spending and taxes regardless of the political consequences.

Actually, what Indianapolis needs is an “honest conversation” about race. But it’s not going to happen, despite (or perhaps because of) the fact that it’s one of the very few big cities to have a Republican Mayor (Greg Ballard, Message him on Twitter).

The backstory here: despite its Middle American image, Indianapolis is suffering increasing white flight. The European-American population has dropped from 76 percent in 1990 to 58 percent today.

Significantly, Indianapolis this year is home to two conferences: both the National Rifle Association, April 25-27—and an annual Indiana Black Expo. July 10-20.  The city government has apparently been refusing to advertise the NRA conference—but it is celebrating the Black Expo from the highest levels.

Needless to say, the city government is also far more involved in the Black Expo in another way—providing massive amounts of security and a huge propaganda campaign aimed at preventing attendees from killing each other.

Also needless to say, despite the Main Stream Media’s loathing for guns and (more importantly) for gun owners, there seem to be absolutely no security concerns over the NRA conference, which bring an estimated 70,000 gun enthusiasts to the city. But—

Visit Indy, the city's tourism arm, normally, promotes its convention bookings. But it has yet to publicize the NRA gathering—an event that has sparked public protests, tight police security and calls to go elsewhere.

In fact, the city’s officials signed the deal to host the convention back in 2010—meaning they remained silent for years.  This was despite the fact that the NRA will reportedly be “the most lucrative trade show or convention in the city’s history.”  The city and the NRA also have differing stories about the lack of promotion, with each blaming the other for the relatively low key publicity campaign.  [Tourism officials kept mum on NRA convention for years, by Anthony Schoettle, Indianapolis Business Journal, January 20, 2014]

The city’s caution about admitting the presence of (overwhelmingly white) NRA members is an almost humorous contrast with its promotion of its Black Expo.

The NRA convention is known for its safety and skillful organization. The NRA itself maintains security.  As Visit Indy’s spokesman told the Indianapolis Business Journal’s Schoettle: “Their events have been held without incident for many decades.”

But for the much larger scale, it might almost be an American Renaissance Conference.

In contrast, the Black Expo has been characterized by an almost continuous series of “incidents” and the necessity for security provided by the city. 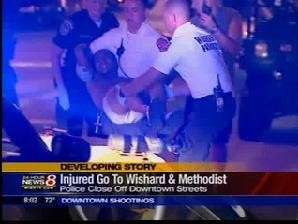 In 2008, knowing the potential for violence, politicians and community leaders held a “peace” rally before the Expo.

Chants of “Peace in the streets” and “Stop the violence” echoed across Whistler Plaza at City Market on Thursday afternoon during the fourth annual Peace in the Streets rally.

More than 500 people turned out for the Downtown gathering, which is among kickoff activities for the 11-day Indiana Black Expo Summer Celebration.

Somehow, the NRA has never felt the need to hold a peace rally before its events.

Alas, the efforts of the government and its black “community” mascots were in vain. The 2010 Expo corresponded with a series of shootings that left nine people injured.  [“Indianapolis Shooting: Indiana Black Expo Violence Leaves 9 Injured,” Huffington Post, July 18, 2010”]

In 2011, “a massive police presence, coupled with citizen patrols and the reconfiguring of some event times and locations, appears to have been an effective deterrent. [Another reason to celebrate: Police, Expo officials and faith leaders credited for peace in the streets, by Tim Evans, The Indianapolis Star, July 18, 2011]

In 2013, the police department actually consulted with the Department of Homeland Security to ensure safety at the Indiana Black Expo in the city, after the city suffered five dead during the week of Independence Day. [IMPD to mount portable lights Downtown, warn gang members to ensure safety at Black Expo, by John Tuohy and Brian Wilson, The Indianapolis Star, Indy Star, July 11, 2013]. Indianapolis’ black police chief begged his co-racials to “come in peace” to the Black Expo event.  [IMPD Chief Hite: ‘Come in peace tonight’ to Black Expo, Indianapolis Star, July 20, 2013]

But whatever the propaganda campaigns and paramilitary presence can accomplish at Black Expos, the larger trend of black violence is already devastating the city.  The white public safety director claims it is being driven by “social breakdown,” rather than alluding to racial factors.  As reporter Tim Swarens at The Indianapolis Star put it, “We all own it.”  [Indianapolis murder surge driven by social breakdown, public safety director says, July 12, 2013]

But it is not that simple.  Some of the officials of the Black Expo sponsored a forum some years ago to “protest the shooting of Trayvon Martin.”  Suggestions from the audience for solutions included “armed struggle.”  [Black Expo ‘Inescapably Tied’ to Race Violence, by Colin Flaherty, WND, June 16, 2012]

Even as some of Indianapolis’s blacks fantasize about insurrection, others in the black community are decrying a “nightmare” of gun violence.

“Reducing gun violence has to be the No. 1 priority of the Black community,” said Rev. Charles Harrison, pastor of Barnes United Methodist Church and a leader of the Ten Point Coalition, an alliance of faith-based leaders and concerned individuals dedicated to stopping violence. “That’s where we need to get our city to put more of our resources. Newtown received a lot of publicity, but in the Black community we are losing kids everyday,” Harrison said.

But Rev. Harrison blames guns and advocates new gun control laws.  In this, he is joined by white liberals eager to disarm the historic American nation.  The media even brings up gun shows as part of the explanation for black crime:

Like other cities, Indianapolis also witnessed an increase in gun buying and selling by individuals who may fear they soon won’t be able to purchase certain weapons if President Obama’s proposals become law.

Last month, for example, thousands stood in long lines to buy, sell or trade firearms during the 1500 Gun and Knife Show at the Indiana State Fairgrounds.

Shortly thereafter, the Indiana affiliate of One Million Moms for Gun Control took to the streets, marching near the state Capitol building to call for strong gun laws, in response to last year’s mass shootings.

“We definitely need stricter laws here in Indiana,” said organizer Andrea Spiegelberg. “We have very lax conceal and carry legislation and background issues. We must make changes not just on the national level, but the state level as well.”

As black violence guts Indianapolis, the treatment of the NRA—and the dispossessed historic American nation—is just another case of Black Run America blaming the victim.