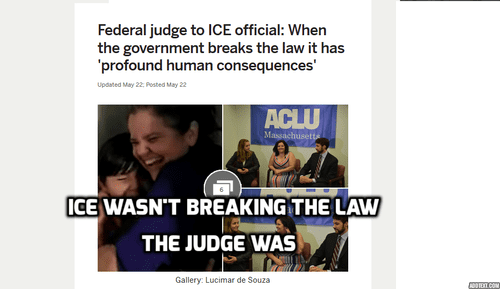 An imperious Federal judge has decided that his personal opinion about immigration enforcement policies is the same as the law.  In a lawless action, Kritarch Mark Wolf has personally attacked immigration officers and successfully intimidated U.S. Immigration and Customs Enforcement (ICE) into ending arresting illegal aliens when they show up to claim immigration benefits to which they do not qualify for.

Wolf called top Massachusetts ICE officials to federal court for questioning Tuesday. Wolf has held that ICE “broke the law” in failing to give detainees adequate notice for their Post-Order Custody Review.

Wolf focused, in part, on the case of Lucimar de Souza, who was arrested by five ICE officers in January. They waited outside the U.S. Citizenship and Immigration office in Boston where de Souza was completing a confirmation of marriage interview, among the last steps to secure her legal status. De Souza is married to a United States citizen and has a 10-year-old son who was born in the country.

Federal Judge To ICE Official: When The Government Breaks The Law It Has ‘Profound Human Consequences’, by Jacqueline Tempera, MassLive, May 22, 2018

While ostensibly about a few days delay in giving an arrested illegal alien a routine notice, a notice that of was of no legal or procedural importance, as the alien in question had an outstanding deportation order and was subject to immediate removal without any right to any hearing, the real issue was the Kritarch Wolf did not like the idea that illegal aliens are being arrested and deported.

Just review his line of questioning in a case allegedly about a delay of a legal notice:

During a tense hearing on U.S. Immigration and Customs Enforcement procedures, federal Judge Mark Wolf paused to ask his witness a personal question.

“How many children do you have?” Wolf asked ICE field officer Thomas F. Brophy, who has served as acting field office director in Boston since February.

Can you imagine, Wolf asked, how it would feel to be facing deportation while separated from your spouse and children?

“I don’t know if I thought about that,” Brophy said.

Those questions were illegal and unethical, the questions had no relevance to the issue at hand, an alleged delay in a legal notice of no importance.  The question about a witnesses children or a nonsensical question about deporting an American citizen was not relevant to the matter at hand and was clearly designed to intimidate and humiliate the witness, an official of the United States executing his lawful duties; arresting illegal aliens.

Kritarch Wolf even allowed an unethical and illegal demonstration in court, and demanded that the government consider a staged video involving the illegal alien in question returning home and greeting her children.

Wolf hammered home the human impacts of the clerical errors made by the agency during Tuesday’s hearing.

“You see when you look at that video for example when the government breaks the law it can have profound human consequences,” Wolf said.

And the whole exercise of intimidating ICE officials had its intent, the intent of Kritarch Wolf, to end arrests of arrogant illegal aliens who appear at immigration offices to demand immigration benefits after absconding from a deportation order.

Federal agents in Massachusetts have halted the controversial practice of arresting undocumented immigrants who are visiting government offices in hopes of gaining legal status, an immigration official told a federal judge Tuesday.

Sadly, instead of standing up for the independence of the Executive Branch, a minor bureaucrat in ICE overturned a Presidential order to arrest all illegal aliens ICE encounters.  The bureaucrat, Thomas Brophy, appears to be a #DeepState operative working to thwart immigration enforcement.

The decision represents a reversal by US Immigration and Customs Enforcement and follows sharp questioning by a federal judge in Boston over the practice, which has drawn a legal challenge from the American Civil Liberties Union as a symbol of the Trump administration’s aggressive stance on illegal immigration.

In a tense court hearing Tuesday, Thomas Brophy, the acting director of Boston’s ICE field office, told US District Court Judge Mark L. Wolf that he ordered an end to the arrests on Feb. 16 after learning that immigrants seeking legal status after marrying US citizens had been arrested during scheduled visits to United States Citizenship and Immigration Services offices.

In fact, the Deep Stater Brophy, a mere acting official, has reinstated the infamous Morton Memos, the illegal and unconstitutional subversion of the immigration laws of the United States by former ICE Director John Morton.

Brophy said he told his officers “we were going to focus on public safety. We were not going to conduct those arrests [at government offices] unless there was a threat to national security or public safety.”

Brophy took it upon himself to overturn a written order of the President of the United States.  This is insubordination and a usurpation of the authority of the President.  On January 25, 2018, President Trump revoked the Morton Memos and any authority of ICE employees to ignore immigration law violations.  The Obama policy of ignoring immigration law violations is no longer in effect.  There was an election, but Brophy has apparently overturned the election of 2016 all on his own, as well as ignoring a written order from the President.

(d) Ensure that aliens ordered removed from the United States are promptly removed;

Furthermore, the Secretary of the Department of Homeland Security  issued instructions to employees to act to arrest illegal aliens when encountered.

Except as specifically noted above, the Department no longer will exempt classes or
categories of removable aliens from potential enforcement.

[Enforcement of the Immigration Laws to Serve the National Interest, Memorandum by John Kelly, February 20, 2017]

Brophy said that the practice had occurred under his predecessor, and he changed it when he took over the job in February. It was unclear Tuesday if the new approach represents a change nationally, or only in Massachusetts. An ICE spokesman declined to clarify it.

As recently as March, ICE had publicly defended the practice as a strategy to keep officers safe while they conducted arrests of immigrants with longstanding deportation orders. In January alone, ICE arrested seven people at immigration offices in Massachusetts and Rhode Island, often immediately after they completed interviews as part of their bid to become legal residents.

“It has always been the case that an arrest could happen at USCIS offices,” a spokesman said in March, following the arrest of Lilian Calderon, a Guatemalan mother of two who was arrested by ICE on Jan. 17 at a government office in Rhode Island she and her American husband had visited to answer questions about her marriage.

While one can expect illegal and unconstitutional attacks on the President’s authority and actions from politicized kritarchs who are part of #TheResistance, such insubordination, cowardice, and unlawful activity by a bureaucrat is beyond the pale.

Ask this Deep State operative on what authority he overturns an order from the President of the United States.