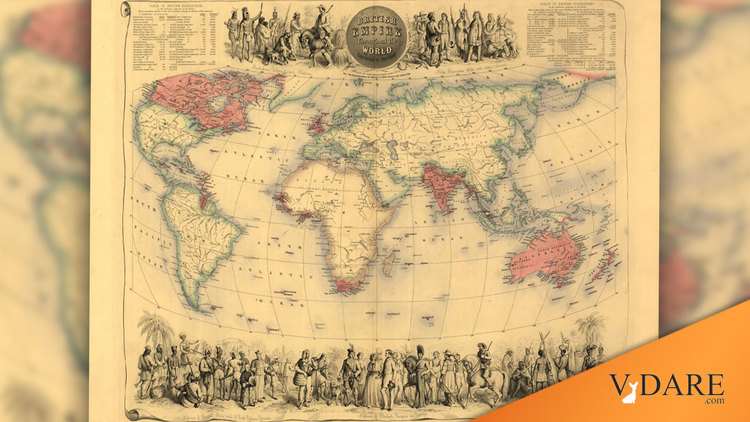 How the West Lost the World

Europe, the Mother Continent of Western Man, is today aging and dying, unable to sustain the birth rates needed to keep her alive, or to resist conquest by an immigrant invasion from the Third World

What happened to the nations that only a century ago ruled the world?

In Churchill, Hitler and 'The Unnecessary War': How Britain Lost Its Empire and the West Lost the World

, published today, this writer will argue that it was colossal blunders of British statesmen, Winston Churchill foremost among them, that turned two European wars into world wars that may yet prove the mortal wounds of the West.

The first blunder was a secret decision of the inner Cabinet in 1906 to send a British army across the Channel to fight in any Franco-German War. Had the Kaiser known the British Empire would fight for France, he would have moved more decisively than he did to halt the plunge to war in July 1914.

Had Britain not declared war on Aug. 4 and brought in Japan, Italy and the United States, the war would have ended far sooner. Leninism and Stalinism would never have triumphed in Russia, and Hitler would never have come to power in Germany.

The second blunder was the vengeful Treaty of Versailles that added a million square miles to the British Empire while putting millions of Germans under Czech and Polish rule in violation of the terms of the armistice and Woodrow Wilson's 14 Points.

A third was the British decision to capitulate to U.S. demands in 1921 and throw over a faithful Japanese ally of 20 years. Tokyo took its revenge, 20 years later, by inflicting the greatest defeat in British history, the surrender of Singapore and an army of 80,000 to a Japanese army half that size.

A fourth British blunder, which Neville Chamberlain called the "very midsummer of madness," was the 1935 decision to sanction Italy for a colonial war in Ethiopia. London destroyed the Stresa Front of Britain, France and Italy that Mussolini had forged to contain Germany, and drove Mussolini straight into the arms of a Nazi dictator he loathed.

In 1936, France sounded out the British to determine if they would support a drive to push German troops out of the Rhineland that Hitler had occupied in violation of Versailles. The British refused. And Churchill congratulated France for taking the matter up with the League of Nations, and said the ideal solution would be a voluntary Nazi withdrawal from the Rhineland to show the world that Hitler respected the sanctity of treaties.

Munich, 70 years ago this September, was a disaster. But it was a direct, if not inevitable, consequence of a Versailles treaty that had consigned 3.5 million Sudeten Germans to Czech rule against their will and in violation of the principle of self-determination.

But the fatal blunder was not Munich.

It was the decision of March 31, 1939, to hand a war guarantee to a neo-fascist regime of Polish colonels who had joined Hitler in the rape of Czechoslovakia.

Britain gave Warsaw a blank check to take her to war over a town, Danzig, the British themselves thought should be restored to Germany. Result: a Hitler-Stalin Pact and a six-year war that left scores of millions dead, Europe in ruins, the British empire bankrupt and breaking, 10 European nations under the barbaric rule of Joseph Stalin and half a century of Cold War. Had there been no war guarantee to Poland, there might have been no war, no Nazi invasion of Western Europe and no Holocaust.

Churchill was the indispensable war leader who held on until Hitler committed his fatal blunders, invading Russia and declaring war on America. He was also the man most responsible for Britain's fall from mistress of the greatest empire since Rome to an island dependency of the United States.

He led the West down a moral incline to its own barbarism by imposing a starvation blockade on Germany in 1914 and launching air terror against open cities in 1940. These policies brought death to hundreds of thousands of women and children.

He was behind the greatest British military blunders in two wars: the Dardanelles disaster of 1915 and the Norwegian fiasco of 1940 that brought down Chamberlain and vaulted Churchill to power.

While excoriating Chamberlain for appeasing Hitler, Churchill's own appeasement of Stalin lasted longer and was even more egregious and costly, ensuring that the causes for which Britain sacrificed the empire—the freedom of Poland and preventing a hostile power from dominating Europe—were lost.

Churchill was, however, surely right when he told FDR in their first meeting after Pearl Harbor that they should call the war they were now in "The Unnecessary War."

He was a Great Man—at the cost of his country's greatness.