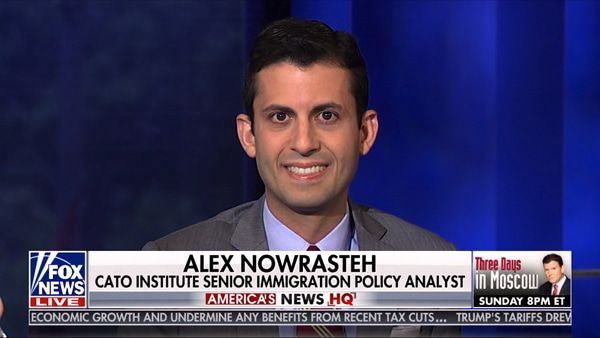 Mass illegal immigration affects primarily low-skilled American workers, because they are the only people who can be replaced by Mexicans and Guatemalans with no education and no English skills.

Specifically, this means Americans who are born with lower than average IQ, the 50 percent who, by the laws of mathematics, score below average on tests. (It's not necessarily a racial point, by the way. As Ann Coulter said of The Bell Curve: "The book—all but one chapter—dealt exclusively with the influence of IQ on white people's lives.")

In The Ugly Side of Open Borders, [Daily Caller, August 26, 2013] Mickey Kaus reports a long Twitter fight with Alex Nowrasteh, a libertarian economist at Cato, who seems to feel that if people haven't graduated from high school, and thus are vulnerable to loss of wages from cheap-labor immigrants, it's their fault.

Why didn't they get an M. Sc from the London School of Economics and a job at think tank like him?

Nowrasteh thinks that Americans without a high school degree should be shamed for "making horrible life decisions."

.@kausmickey Private charity or shaming them for making horrible life decisions. Why didn't u just ask instead of assuming I meant welfare?

After printing a plain text version of their Twitter fight, Kaus writes:

We now know Nowrasteh’s position on Americans who work full time but can’t make it when low-skilled immigrants swarm into their lines of employment: They don’t get trade-adjustment style “transfer payments.” They don’t get welfare.[*** –Although, in reality, they will.] They don’t get any government aid. They get private charity and (what so often accompanies private charity) scorn–social “shaming” for their “horrible life decisions.”

Now, it’s one thing to do that for paradigmatic welfare recipients who don’t work—I’ve promoted something similar myself. It’s another to do it for Americans (and lots of immigrants) who get up and work every day. In the ideal version of America that’s been dominant in my lifetime, at least until now, these stubborn working people may not get rich, but they get something as valuable, namely respect and the minimal wherewithal needed to participate in mainstream life.

In Nowrasteh’s America they get pretty much the opposite of respect (which is what shaming is). There’s just no place for them in the global labor market of the future! Serves them right. They should be smarter.

That’s the broader, more insidious implication of open bordersism–it takes the economic forces that are pulling America apart–giving us a Herrnsteinian society stratified top to bottom by (in large part) intellectual abilities–and both embraces and accelerates them.  If the American middle class now going to busy itself “shaming” workers at the bottom (who now deserve to earn the wages of Bangladeshis) what’s the upper class going to think of those stuck in the middle class? Do they want to find out? [Emphasis in original]

As it happens, thirteen years ago Steve Sailer did a series on VDARE.com called America And The Left Half Of The Bell Curve:

Steve’s point that some people are dumber than average. They're just born that way and they can't help it. But they are still Americans.

This is something Nowrasteh and other libertarian economists can't seem to grasp. They themselves have jobs that are, as Steve put it, “Too high-class for quotas”, meaning that they’re not threatened by Affirmative Action, and can’t be replaced by some guy from Guadalajara. (Of course, economists, like computer programmers, can be replaced by legal immigrants on visas. They displace a better class of Americans. )

Cut Back on Unskilled Immigration—This is the utterly obvious way to help the left half of America's Bell Curve.

Calls for open borders are occasionally heard in the libertarian and neoconservative fever swamps. But it's just ideological posturing. Border restrictions are plainly necessary to keep Los Angeles from turning into a real-life set from Blade Runner. We must have limits on the number of immigrants. So our immigration policy cannot benefit more than a few of the world's 5.7 billion foreigners. What we can do is help our fellow American citizens.

By providing more jobs and higher wages to the less-gifted American workers, immigration restriction would not only make their wallets thicker. Making it easier for a young man to support a wife and kids also inculcates the bourgeois virtues that government doles undermine. Work and marriage are the great civilizers of young men. But it's hard for Americans to afford a wife and family on the wages prevailing in Mexico.

Sure, this would worsen the upper middle class's Servant Problem. But American civilization will not crumble just because we would no longer have the Western world's lowest-paid pool guys.

So let me get back to the racial aspect of the Bell Curve debate—the fact that the Left Half of the Bell Curve, including the high school dropout population, is much more likely to be black than white.

Is Alex Nowrasteh serious about “shaming” the African-American population for “horrible life decision” of being born black?

If so, people like Jason Richwine, John Derbyshire, and Pat Buchanan would like to know why he still has his job—and not them?