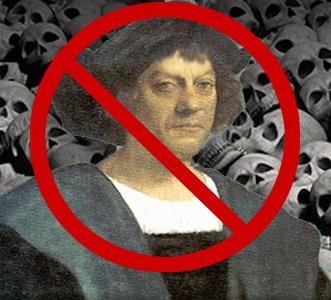 In 1492, "Columbus sailed the ocean blue" and discovered the New World. And Oct. 12 was once a celebrated holiday in America.

School children in the earliest grades knew the date and the names of the ships on which Columbus and his crew had sailed: the Nina, the Pinta, the Santa Maria. They knew his voyage had been financed by Queen Isabella of Spain, after the Genoese Admiral of the Ocean Sea had been turned down by other monarchs of Europe.

Oct. 12, 1492, was considered a momentous and wonderful day in world history: the discovery of America—by men from Europe.

This year, Columbus Day passed almost without notice. And that Columbus Day has become an embarrassment to many and an issue of savage controversy to some reflects a receding belief in this country in the superiority of our civilization.

Haters of Columbus say he was an imperialist, a colonialist, a genocidal racist, and a slaver who brought dictatorship, disease and death to the native peoples he encountered in the Caribbean.

And, in truth, many explorers and conquerors like Columbus, Cortes, Magellan, Pizarro and the soldiers and sailors they led, engaged in acts we would call atrocities and war crimes.

Yet that is true of every great empire and great civilization. The ancient Greeks had slaves. Were the Romans not brutal conquerors? Ask the Carthaginians. The Spanish, British and French empires all have their own long chronicles of crimes against colonized peoples.

Today we say that the beheadings and crucifixions of ISIS remove them from the company of civilized men. They should be annihilated to the last man, we hear on cable TV.

But the Romans beheaded St. Paul and crucified Christ. Queen Elizabeth beheaded her cousin Queen Mary, even as her mother Anne Boleyn had been beheaded by her father Henry VIII, who also decapitated Sir Thomas More.

The French Revolution Jefferson loved used at its instrument of justice the guillotine, to which Louis XVI and his queen Marie Antoinette were sent. Those heroes of the Revolution, Danton and Robespierre, were guillotined, as was Charlotte Corday, four days after she stabbed to death in a bathtub a third great man of the revolution, Marat.

Great men are rarely good men, and every great empire is guilty of great crimes. But the empires men still study and admire are those that created, built and advanced civilization, that brought mankind to a higher plateau, that left behind magnificent legacies.

And here we approach a deep-seated reason for the hatred of Columbus. He was a colonialist and an imperialist. He believed in the superiority of his Catholic faith and European tribe. He believed that what we call the West should rule, because its faith, of which God Himself had been the founder, and its culture and civilization, which excelled all others in arms, inventions, literature, governance and the arts, were superior.

When he landed in the Caribbean islands and found peoples there with no alphabet, who had not yet invented the wheel, Columbus did not think them equal. The only reason he would believe they had intrinsic worth as fellow children of God would be from the teachings of his faith.

Right up to our own time, Western men believed with Columbus that their Christian faith and their civilization were superior. Today, Columbus is denounced and rejected because he acted in his belief that the indigenous peoples he encountered should be converted and ruled by Europeans. Columbus rejected the idea of equality.

Yet how far from his view were Washington, Jefferson, Madison and James Monroe, slaveholders all. How far from Columbus' view was Andrew Jackson? Was Jackson's treatment of African-Americans and the indigenous peoples of Florida so different from that of Columbus?

Gen. Philip Sheridan, to whom Sherman gave command of the West, volunteered, "The only good Indian is a dead Indian." His troopers often acted upon that belief.

The Spanish Empire, the British Empire, the French Empire, the United States all rose to power and greatness, motivated by a belief in the superiority of their race, tribe, religion, culture and country. All believed their innate superiority conferred upon them a right to rule what Kipling called "the lesser breeds without the law."

How else, these men would ask us, does civilization progress, if not through the imposition by superior men of superior ideas? What great nation, what great empire, what great civilization ever rose on a belief in the equality of all other peoples and all other faiths?

The United States, among the largest countries on earth, from sea to shining sea was carved out of lands seized from native peoples by Spanish, British, French, and Russian conquerors first, then taken by us.

We are the heirs of marauders, pirates, conquerors, colonizers, colonialists, and imperialists. And such knowledge is why so many have guilty consciences and seek to salve them by repudiating Columbus.

As they say in Seattle, Happy Indigenous People's Day.