Now we are told that a DACA amnesty (possibly to include millions of “Dreamers” on the slippery slope) can be finagled into a deal with a bundle of enforcement. Mark Krikorian makes a good case that a tough enforcement payoff including an end to chain migration and Diversity Visa will be worth the negative effects of the amnesty: The Logic of a DACA Deal, National Review, Aug 28, 2018.

This analysis reflects a political viewpoint, not a psychological one. It sorts out the deal that can be gotten through standard political negotiation. But that’s not how a DACA forgiveness will be seen in the Third World. Poor people desiring to mooch a better life in the United States will see the word “Amnesty!” and begin packing their bags. After all, if the tough-on-aliens President Trump allows an amnesty to happen, then America (the former “nation of laws”) will be seen as a paper tiger, with periodic amnesties occurring every decade or so. Amnesty Forever is the message.

Washington may be able to grind out difficult legislation on amnesty, but the psychological effects on people around the world are not being taken into account sufficiently. Krikorian understands the incentive being created and says “any DACA amnesty must be accompanied by enforcement measures.”

Okay, but will the enforcement be sufficient to balance out the hard-to-quantify alien surge? Many millions may come. We might see a future explosion of illegals working off the books. Do we want to take the chance of an alien tsunami?

Below, President Reagan signs the mother of all immigration amnesty bills in November 1986. 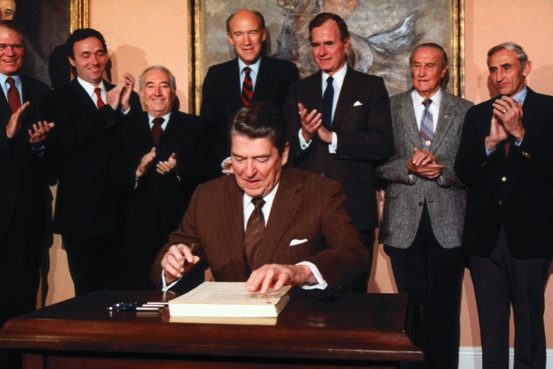 As the enforcement stalwart Senator Chuck Grassley observed after voting for the 1986 amnesty, “You know what I found out? If you reward illegality, you get more of it.”

Senator Tom Cotton warned that passing the more extensive DREAM Act would be “the single biggest amnesty in the history of the United States.”

Keep in mind that there are nearly three billion more residents on planet Earth now compared to Reagan’s time — 4.9 billion in 1986 vs. 7.6 billion today. Most of that growth is occurring in poor countries.

Furthermore, DACAs are characterized as grateful valedictorians, when in fact they are demanding leftists who feel entitled, as revealed when they accosted House Minority Leader Nancy Pelosi during a September presser. It looked like they were on the verge of violence against her for not being tough enough in demanding amnesty for all illegals.

An angry mob of DACA pests descended on Hart Senate Office Building in November, showing the Pelosi skirmish was not a one-off. #NoDACANoPeace is showing up on Twitter as a hashtag.

DACA amnesty recipients won’t feel appreciative to Republicans; they will instead add to a future permanent majority of Democrats created by decades of excessive legal and illegal immigration.

Finally, destroying the Founders’ unique creation by erasing the rule of law just to hand out amnesty candy is wrong. As Congressman Steve King tweeted on Sunday:

Congress and President Trump cannot legalize DACAs without sacrificing the Rule of Law and broadcasting a call to come to America to be here for the next amnesty. No matter the “deal” the Rule of Law would fall!

Every amnesty has opened our borders wider and made America less sovereign. The American character is being watered down by the presence of foreign cultures which want things done their way, often with a big-government preference. Immigrants gather in their own ethnic neighborhoods like Little Mogadishu in Minneapolis and the Little Mexicos across America so they can maintain their own cultures and avoid assimilation.

These and other negative symptoms show a system of legal and illegal immigration which has devolved into chaos. Decades of open borders have eroded the rule of law which cannot survive much more abuse from powerful do-gooders and cheap-labor importers.

It’s a mistake to sacrifice the rule of law for a even a good deal with strong immigration enforcement measures. Every amnesty creates another. Amnesty Forever is the result.