Fifty Years Ago Today: How An Alabama High School Received The News Of Kennedy’s Assassination 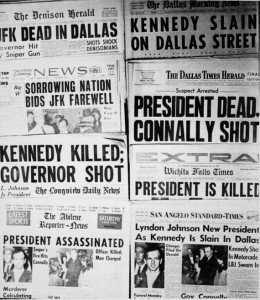 I settled into a comfortable chair in the small teachers’ lounge, anticipating using the few remaining minutes of my 30-minute lunch break to blissfully draw a few deep breaths. Two minutes later my plan was shattered. Coach Cook burst into the room and blurted out: “Kennedy’s been shot.”

I am among the millions who can link their lives to this historical event, and who can retell on demand the story of their whereabouts and the events flowing around them at that moment. But I will challenge all the others in their retelling to surpass the pathos, and especially the irony, of that which I am about to relate.

Some stories can stand alone, outside of any particular time or place, but not so here. To give completeness and truth to my story it is necessary to briefly describe the venue.

I grew up in the Alabama Black Belt town of Union Springs, population about three and one-half thousand, lying some 40 miles southeast of Montgomery, and 30 miles west of George Wallace’s hometown of Clayton. It was a cotton town, the streets in the fall sometimes being choked to one lane by the bales spilling out of the warehouses.

The center of the town was watched over by the obligatory Confederate soldier standing resolutely on his pedestal, long rifle at his side. When I was in grammar school, on Confederate Memorial Day we students came to school dressed in white, and when a special bell rang, we filed out of our classrooms, marched up the hill, and laid wreaths at the soldier’s feet.

The full history of The War was murky to us, but, for the oldsters of our grandparents’ generation who supervised this ritual, it was among yesterday’s current events.

The town had a high school with 750 students, grades seven through twelve, and that is where I graduated. From there I went to the University of Alabama and got a degree in Electrical Engineering. Three years of necessary military service followed, and several years of other jobs. But at a certain point I was without a job, and a friendly county superintendent gave me a one-year “emergency” teaching job in my old Union Springs High School. I was, as it were, right back where I started from. And on that day in late November I was just three months into my newfound and unexpected teaching career.

Kennedy was not popular in the South in 1963. His policies of racial integration had given him the enmity of a wide segment of the white population. He was especially lacking in popularity where I was, in a small south Alabama town where the population in the county was about three-to-one in favor of the blacks. The school where I taught was still all-white but the townsfolk were cringing in the knowledge of what might soon happen. It was a divisive, stressful time in national politics, and the white population regarded Kennedy with no less suspicion, and saw him as no less a threat, than if he had been a vandal with a battering ram at the gate.

Nevertheless the teachers in the lounge that day felt nothing but shock at the knowledge that the President of the United States, no matter who it was, might fall victim to an assassin.

“I heard it on my car radio coming back from lunch,” Coach Cook said. “It’s confused. They don’t know how bad he’s hurt.”

I left the lounge and walked the few paces to the office of Mr. Reed, the principal. I told him the news and he switched on his radio. Which station to select was a moot question since everything on the air was carrying the story.

At this point there was little information, and what there was, was vague. The reporters were talking excitedly but they were filing the airways mostly with speculation and hearsay. Although the president had probably been struck by one or more bullets, even that didn't always sound certain.

In a moment the bell rang and I had to leave the principle's office and go to my class.

My students assembled in my classroom and I gave the news to those who hadn't heard. Mr. Reed turned on the school's intercom system and piped the news coming over his radio into all the classrooms.

It was known that President Kennedy had been taken to Parkland Hospital now and reporters were on the scene there. Someone reported having seen blood on the president, perhaps on his face. The picture seemed to grow darker. The newsmen's voices sounded ominous, like they knew more than they were willing to say.

I paced the floor at the front of the dreadfully still room. My students were uncharacteristically quiet, intent. The concentration showed in the tautness of their faces.

Time went on. The news grew worse. The president was apparently gravely wounded, perhaps mortally wounded. He might—nobody would dare say for sure—even be dead.

The tension was dreadful. There was nothing new. The reporters had to repeat and re-repeat themselves.

But finally the announcement came. We knew from the tone of the newsman's first few words what he was going to say. He said unequivocally what we had been gradually allowed to realize:

"I greatly regret to report that President Kennedy is dead."

In unison my students leapt from their seats into the aisles, cheering and waving their arms. It was as though their team had just come from behind and scored the winning touchdown in the last few seconds of the game which would decide the national championship.

Reflecting the emotions of their parents, these 14-year-olds thought that fate had just released them from the oppression of a tyrant.

I suppressed an impulse to give them a moralizing lecture. Instead I just told them to sit down and be quiet.

There is a postscript to this story, and any randomly-selected reader of VDARE.com could write a passably accurate version of it.

The inevitable court suits came soon enough, against the school and against local government. The blacks gained the ascendency. The venerated Confederate Soldier was removed from his pedestal and consigned to an out-of-sight place in a very old and inactive cemetery.

As for the school itself, it yielded—slowly and stubbornly at first, but then altogether—to the orders of the federal court, and integrated.

There is today no school for whites in Union Springs. My alma mater is all black. The whites are carpooled to the next county to attend a private academy. Of course, this means they bear a considerable expense.

I doubt that even this is the end of this story. But it may be a distant progeny that is called to write it.

Hugh McInnish [email him] is a consulting engineer and publisher of supressednews.com