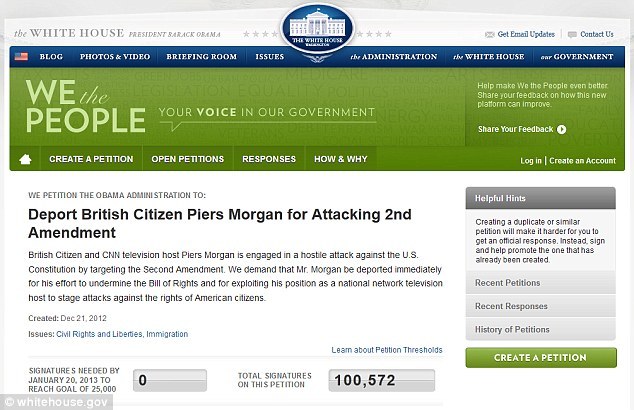 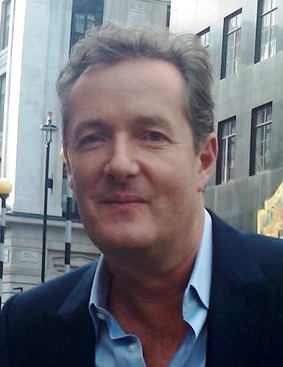 In the wake of British journalist Piers Morgan’s over-the-top rants (even by MainStream Media standards) rants in favor of gun control after the Newtown tragedy, over 60,000 Americans have signed a petition to the White House urging that Morgan be deported.  The petition states

“British Citizen and CNN television host Piers Morgan is engaged in a hostile attack against the U.S. Constitution by targeting the Second Amendment. We demand that Mr. Morgan be deported immediately for his effort to undermine the Bill of Rights and for exploiting his position as a national network television host to stage attacks against the rights of American citizens.”

—to which James Taranto of the Wall Street Journal tweeted back:

Taranto’s little zinger is correct on constitutional grounds. But contrary, to the Daily Caller’s headline, the article does not actually give us any guidance about getting Morgan deported.

In Kleindienst v. Mandel, to which Taranto refers, the Supreme Court held that a Communist professor who was (surprise) invited to speak by many elite American universities, could be denied a visa based on his advocacy of world communism.

But just because the Executive Branch was not barred from excluding Mandel does not mean that it is able to deport all aliens at its own prerogative. Congress had already excluded all aliens who advocated “the economic, international, and governmental doctrines of world communism.”  However, there is no statute that authorizes the deportation of liberals, supporters of gun control, or those who generically want to “undermine the Bill of Rights.”

If we want to deport immigrants who oppose the Second Amendment, Piers Morgan, is of course, not alone. Polls consistently show that Hispanics support gun control at a higher percentage than other Americans. A Pew Research poll asked if it were more important to protect the rights of Americans who own guns or control gun ownership. Fifty seven percent of whites said protect the rights of gun owners. However, only 29% of Hispanics supported gun ownership rights, the lowest support from any ethnic group. [More Support for Gun Rights, Gay Marriage than in 2008, 2004, April 25, 2012]

Similarly, last year a poll by Bloomberg’s Mayors Against Illegal Guns found that 69% of Hispanics believed gun control laws should be stricter.

Admittedly, these numbers could be skewed, given the source. However the group found that only 42% of all Americans (this number includes Hispanics, so the overall non-Hispanic support of gun control would be much lower) supported gun control. [Latino Attitudes Toward Gun Safety and Gun Laws, October 25, 2011]

USA Today’s editorial board’s token Hispanic, Raul A. Reyes, argued after the Aurora Colorado shootings this summer that “Perhaps in the future, as our numbers continue to grow, Hispanics will demand laws to limit the possibility of senseless gun violence.” [Latinos may lead the way to gun control in the future, NBC Latino, July 22, 2012]

James Taranto has appeared to improve over the last few years and occasionally has made some insightful points. But by and large he has been a relentless promoter of mass immigration. I found his tweet amusing, and in fact it was the exact same thought I had when Morgan complained about his supposed First Amendment rights. But I found the fact that Taranto seems advocating for the plenary powers in immigration in this particular case is paradoxally emblematic of the problem with the whole “Deport Morgan” meme.

Piers Morgan is just one person— we are letting in hundreds of thousands of immigrants into the country who will eventually become citizens and vote for gun control laws. Yes, Morgan has more influence than your average Hispanic immigrant. But being a fanatically pro-gun control cable news anchor is not a job Americans won’t do. If he were deported, I am sure someone just as bad would replace him.

And as tempting as it is to pick on Taranto, the real culprit has been the American Right—Conservatism Inc.—in general.

I would not be surprised if the majority of the “Deport Morgan” signatures came from the Drudge Report’s promotion of the petition. Drudge even ran a top story attacking Morgan complete with his face next alongside a British Redcoat. Drudge, along with other conservative outlets such as the Daily Caller, The Blaze, [White House Petition to Deport Piers Morgan Over Anti-Gun Views Hits 31,900, December 24, 2012] and Hot Air [How to deport Piers Morgan, December 23, 2012], and Breitbart [US Petition to Deport Piers Morgan Hits 31,400, December 24, 2012] have all promoted the “Deport Morgan”campaign.

Yet none of them have mentioned the overwhelming support of Hispanics for gun control.

America’s political liberties are not threatened by British journalists immigrating to our country. The Redcoats are not coming to take our guns away.

However, massive immigration might succeed where King George failed.