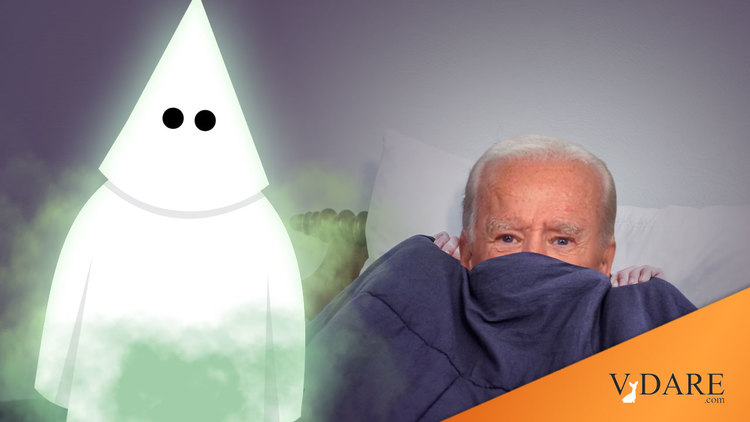 Previously: CAPITOL "INSURRECTION" HOAX: How Our Lying Press Would Have Spun Jan 6 Protest If Trump Were A Democrat

The Democrats canceled business in the House on March 4 because of a falsely predicted attack on Capitol Hill. But the highly-touted Q-Anon-inspired “insurrection” was, as the Washington Post reported, “a mirage” [At the Capitol, a March 4 threat from militant Trump supporters proves a mirage, by Katie Mettler et al., March 4, 2021]. Nevertheless, this crazy conspiracy theory pushed by the Regime Media had a purpose: to further smear all Trump supporters as a “white nationalist” militia who might attack “our democracy” at any time. That, in turn, informs the meme that the Democrat/Media complex been pushing for months, not least through federal law enforcement agencies; i.e., right-wing (white) extremists are the No. 1 threat to the country, and so the state must have the power to crush them. Curbs on basic liberties such as gun rights and free speech—the latter already enforced on social media—in the works, as are police-state tactics to code and trace the activities of rank-and-file Trump supporters. Some GOP/GAP lawmakers are getting alarmed, but not enough.

Thus, also last week, Time Magazine breathlessly dished out the Regime’s black propaganda: Domestic white terrorists are “one of the greatest domestic threats since the Civil War,” writers Vera Bergengruen and W.J. Hennigan fretted. And Biden, they sighed in relief, is the first president to “refocus the network of U.S. security agencies to help combat domestic extremism.”

Here’s what the Regime is doing according to Time:

Biden’s director of national intelligence, Avril Haines, is working with the FBI and DHS to assess the threat. A new four-person office at the National Security Council (NSC) has launched a 100-day push to better understand and tackle the problem. The office is seeking crime data and information on recruitment strategies, and convening weekly video meetings with former federal officials, scholars and advocacy groups. There’s talk of expanding FBI field offices and boosting funding for programs that rehabilitate former violent white supremacists and neo-Nazis. …

At DHS, officials are expanding programs that focus on keeping those who flirt with extremist views from joining militant groups or committing violent acts. Biden’s newly confirmed Secretary Alejandro Mayorkas said the task will be to “identify where the line between hateful rhetoric and hateful action takes place, to be well ahead of the action before it occurs and to stop it.” The agency announced it will provide at least $77 million in federal grants to state and local governments to combat domestic violent extremism, including training beat officers to spot the signs of far-right violence early on.

[Inside the Biden Administration's Uphill Battle Against Far-Right Extremism,  March 4, 2021]

Ignore for now the long-known fact that Time itself was a CIA asset, and focus on the import of its current claim: Mouth-breathing right-wingers are an American Taliban, crazed outcasts hiding in caves, ready to strike when the mysterious Q delivers the order. The threat, though, isn’t just from cave-dwelling, right-wing jihadists. Also implicated are normal Americans upset with the direction of the country, Time reports: The “vast majority [of January 6 demonstrators] were ordinary Americans—members of church groups, families who traveled together, and what the report calls ‘inspired believers’—which shows how far-right beliefs have seeped into the mainstream.”

1/3 "The makeup of the mob that stormed the Capitol may be the biggest problem. Though Congress has focused on militias and white-supremacist groups the vast majority were ordinary Americans" i.e. Biden, TIME's conspiracy theory is a damned lie https://t.co/Z1oDixWu99

Already, lawmakers are pushing a new “domestic terrorism” law, backed and at least partly conceived by the Anti-Defamation League. ADL, of course, along with Southern Poverty Law Center, routinely targets those it doesn’t like for professional and financial ruin with accusations of “hatred” and “racism.”

In short, it would shred the First Amendment and bar Trump supporters from public life.

Shockingly, some prominent Republicans are backing this blitzkrieg. “What happened Jan. 6 just cries out” for new terror laws, Texas Rep. Michael McCaul, a former Homeland Security Committee chairman, said last month at a hearing about the plan. “I think it sends a strong message about where Congress is, that we’re going to treat domestic terrorism on an equal plane as international terrorism.” Of course, Democrats want to strengthen Section 230 of the Communications Decency Act to help Big Tech to censor even more [Bipartisan support emerges for domestic-terror bills as experts warn threat may last ‘10 to 20 years,’ by Karoun Demirjian, the Washington Post, February 4, 2021].

Thus outside of formal legislation, lawmakers can pressure Big Tech and other institutions to deplatform, stigmatize and then ostracize the Right.

FBI director Christopher Wray recently testified to the Senate on the alleged “domestic terror” threat and warned of the dangers of uncensored online speech [Wray Stresses Role Of Right-Wing Extremism In Hearing About Jan. 6 Riot, by Brian Naylor and Ryan Lucas, NPR, March 2, 2021]. Several lawmakers concurred with his opinion and demanded the feds do more to monitor “hate speech” on social media.

Sen. Patrick Leahy was particularly obsessed with “white supremacists,” and Wray snapped up the bait.

Sasse wants to know how FBI can criminalize social media posts and if FBI has enough resources to do it. Asks about high school bullies who might be turning violent on social media and where to snitch—I just can’t with these people.

The threat that sixth-graders post to the public weal notwithstanding, any time Big Tech execs are hauled before Congress, Democrats—and some Republicans—demand to know why they don’t censor “hate speech.” We know what’s happening there. But patriots have more to worry about than their Twitter accounts. They have to worry that banks and other financial institutions deny them service. Gab, for instance, reports that four banks have refused to host its account.

Watching all this, Republicans are mostly silent. A few such as McCaul and Sasse are even cheering this reign of political terror against their own voters. Only one Republican worried about the new domestic terror laws and ADL plan, for instance. “Can people not have differing opinions and those opinions not affect the actual work that they do?” Georgia Rep. Andrew S. Clyde asked ADL chieftain Jonathan Greenblatt at the hearing where the censorship plan was discussed.

Fierce debate shouldn’t allow you to dehumanize me or any other person from any minority group.

ADL, of course, will decide what’s “dehumanizing,” which means it will settle the parameters of acceptable speech.

This was the sole “testy exchange” of the hearing, the Washington Post reported. No kidding. No good Republican would ever question the ADL.

At least patriots have Sen. Josh Hawley over in the Senate. The Missourian has questioned DHS for issuing with little justification its “heightened threat environment" warning in January. “If this is just some attempt to amass power, and to go after the civil liberties of law-abiding Americans, we're going to have a big, big problem,” he told Fox News’ Laura Ingraham [Josh Hawley Criticizes 'Troubling' DHS Report on 'Heightened' Domestic Terror Threat, by James Walker, Newsweek, January 28, 2021].

And he grilled Wray on the FBI’s violating the Bill of Rights with its invasive investigation into the Mostly Peaceful protest on January 6. Hawley was particularly concerned about the exploitation of cell phone data without proper oversight [Hawley presses Wray on use of geolocation data to track Capitol rioters, by Dominick Mastrangelo, The Hill, March 2, 2021].

The most heroic Republican lawmaker to defend Trump supporters: Wisconsin Sen. Ron Johnson. He routinely challenges the Deep State’s narrative about the events of January 6. He has correctly noted it wasn’t an “armed insurrection” because the “insurrectionists” did not use firearms, which he forced an FBI official to admit under oath. And Trump, he says, is not to blame. Johnson also speculates that fake Trump supporters were responsible for much of the violence, which the Leftist MSM denounced as a baseless “conspiracy theory,” despite the arrest of pro-Antifa agitator John Sullivan [Ron Johnson at the center of the storm, by Manu Raju and Alex Rogers, CNN, March 4, 2021].

Sullivan’s arrest raises an important point. While government super spies go on a snipe hunt for “white supremacist” terrorists, very real Antifa terrorists run wild. The Department of Justice has just dropped 31 of 90 cases against Portland rioters involved in the attacks on federal buildings and officers. This is the same federal government that keeps Trump supporters locked up indefinitely for walking around the Capitol without permission [A Family on Trial for January 6, by Julie Kelly, American Greatness, March 4, 2021]. The feds won’t put resources toward the real domestic threat—the helmeted, leftist goons who burned property, attacked police stations, beat up journalists, and hurt hundreds of innocent Americans.

In other words, the Anarcho-Tyranny grows more powerful.

Here’s the takeaway from all this:

The Biden-Deep State Regime is planning a totalitarian crackdown to end dissent and smooth the way for one-party rule. Stopping that requires refuting the Regime’s January 6 narrative, and showing that the real terror threat in this country is the nationwide network of heavily-armed and battle-ready Antifa goons and their allies in Black Lives Matter.

Discouraging as the result of November 3 is, the GOP must fight. If it doesn’t act soon, January 6 will become the Regime’s Reichstag Fire to erect a totalitarian state that not only suppresses but also criminalizes all opposition.

That, of course, will hasten the insidious dispossession of the Historic American Nation, and, ultimately, finalize The Great Replacement.

Hawley, Johnson, and like-minded legislators know the stakes and what they must do.

Who else on The Hill has the guts to join them?