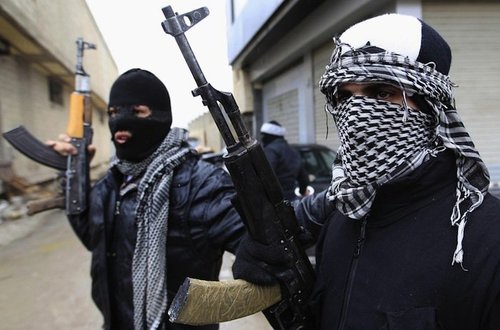 Chairman Mike McCaul of the House Homeland Security warned on Monday that America’s refugee program has been targeted by ISIS as a way to insert jihadists into this country.

In the clip below from a one-hour speech, McCaul observed about ISIS:

You can watch the entire December 7 speech on C-SPAN: State of Homeland Security.

On Sunday, McCaul remarked that the security community did not see the San Bernardino attack coming, which must have rattled him some. He further said that the government cannot prevent all the attacks: “It’s almost impossible to stop it all.”

In his Monday speech, he also remarked, “I believe 2015 will be seen as a watershed year in this long war — the year when our enemies gained an upper hand and when the spread of terror once again awoke the West.”

McCaul’s view of the state of national security is quite different from the pablum delivered by Obama in his Sunday White House speech.

Intelligence officials have determined that Islamic extremists have explored using the refugee program to enter the United States, the head of the House Homeland Security Committee said on Monday.

Rep. Michael McCaul (R-Texas) declined to go into detail about the determination, which the Obama administration has not announced publicly.

Yet the disclosure could give ammunition to critics of the White House’s refugee plans who have warned that the program is vulnerable to infiltration by adherents of the Islamic State in Iraq and Syria (ISIS).

“ISIS members in Syria have attempted to exploit it to get into the United States,” McCaul said during a speech at the National Defense University.

“The U.S. government has information to indicate that individuals tied to terrorist groups in Syria have already attempted to gain access to our country through the U.S. refugee program.”

McCaul would not say specifically who informed him and other lawmakers about the revelation, only describing the sources as “elements of the intelligence community.”

“That was very courageous for them to come forward with this, to tell me about this personally, given the political debate on the Hill,” he added, suggesting that the news did not come from intelligence leaders.

The White House would not confirm or deny McCaul’s claim, instead referring reporters to his office to explain where he got the information.

A spokesman with the Office of the Director of National Intelligence also declined to comment on the record about the assertion.

McCaul’s speech comes amid escalating concerns about Islamic extremism in the West, following the killings of 130 people in Paris and 14 in San Bernardino, Calif. The massacres have caused American fears about terrorism to spike, and left Congress grasping for a response.

President Obama has repeatedly pushed back against warnings that ISIS could attack the United States by sending over fighters as refugees.

The Syrian civil war has killed more than 200,000 people since it began in 2011, and forced more than 4 million refugees to flee.

Refugees undergo rigorous screenings that last for up to two years, the administration has said, making them among the most thoroughly vetted people coming into the country.

Still, Republicans and some Democrats have been wary of the president’s plans to allow 10,000 Syrian refugees into the country next year.

Last month, the House voted overwhelmingly to make it more difficult for refugees from Iraq and Syria to enter the United States.

In his speech Monday, McCaul painted a bleak picture of American national security, which he compared to the World War II fight against fascism.

The current threat posed by Islamic extremists is greater than at any time since 9/11, he said, and ISIS is “now more dangerous than al Qaeda ever was under Osama bin Laden.”

“I believe the state of our homeland is increasingly not secure,” McCaul said.

“I believe 2015 will be seen as a watershed year in this long war — the year when our enemies gained an upper hand and when the spread of terror once again awoke the West.”

The chairman’s dire outlook stood in contrast to the message from Obama, who less than 24 hours before attempted to reassure the nation about terrorism in his third-ever address from the Oval Office.

“The threat from terrorism is real, but we will overcome it,” Obama said.

“We will destroy ISIL and any other organization that tries to harm us. Our success won’t depend on tough talk, or abandoning our values, or giving into fear,” he added, using an alternate acronym for ISIS. “Instead, we will prevail by being strong and smart, resilient and relentless, and by drawing upon every aspect of American power.”

McCaul’s comments could signal a renewed commitment to keep national security at the forefront of Congress’s focus, even as it rushes to finish its legislative work and adjourn for the year.

This week, the House is expected to take up legislation tightening a program allowing travelers from 38 countries to enter the U.S. without a visa. The reform is the only White House recommendation that Congress is likely to act on in the wake of the recent killings.

“This is just the beginning,” McCaul promised. “Over the coming weeks, we will introduce a slate of new bills based on the findings of the [bipartisan congressional] task force to keep terrorists from crossing our borders.”

Among other steps, McCaul said that lawmakers were interested in further hardening the country’s borders against extremists, sharing intelligence with foreign countries and developing a special commission to examine challenges posed by the proliferation of encryption technologies, which prevent the government from intercepting a suspect’s messages.