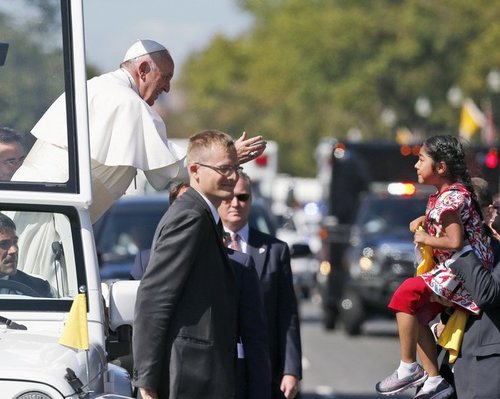 Groomed for a year by an outfit called the "Full Rights for Immigrants Coalition," Sophie is the ponytailed poster child for amnesty who was literally propped up in front of the pope during a September visit to Washington, D.C.

Latino activists brazenly bragged about training the first-grader before the visit and crafting a letter in her name pleading with the Catholic pontiff to help her rescue President Obama's executive illegal immigrant amnesty program DAPA (Deferred Action for Parents of Americans and Lawful Permanent Residents), which was halted under federal court order on May.

In The Washington Post, a Harvard University professor praised the kiddie human shield tactics of the amnesty movement after Sophie's stunt.

"Tactically really, it's one of those moves that is just brilliant," Roberto Gonzales [Email him]a Harvard University sociologist, told the Post reporter, Janell Ross. Ross marveled at the "power of personal narrative" and noted how the use of a child to deliver a political message had been "deployed to great effect." 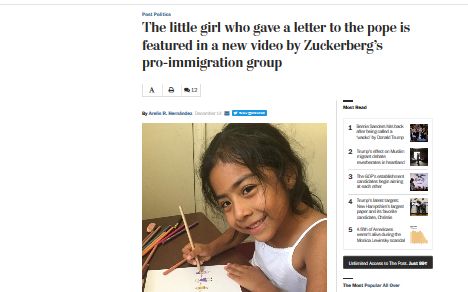 Imagine if a conservative political cartoonist had depicted Sophie as an organ grinder monkey on a leash held by her illegal immigrant parents and Mark Zuckerberg.

Imagine if a conservative political cartoonist had defended the depiction of Sophie as a chained dancing monkey by commenting that her parents' use of their daughter in political ads and media students made the child "fair game."

Imagine the front-page, white-hot, and nonstop outrage from Democrats, journalists and the White House that would ensue.

Cruz's sin? Including his 4-year-old and 7-year-old daughters, Catherine and Caroline, in a light-hearted Christmas video poking fun at his rivals and playing off his "Green Eggs and Ham" moment on the Senate floor in 2013.

In the bizarre world of The Washington Post, employing a 5-year-old to breach Secret Service security for an international headline-grabbing papal photo op and to shill for Facebook's self-serving immigration expansionist agenda is "brilliant" and humanizing.

Telnaes indulged her Cruz Derangement Syndrome not just by attacking Cruz, but by serving up a crude depiction of his young, half-Hispanic daughters as animated monkeys. She bitterly warned on Twitter that since "Ted Cruz has put his children in a political ad—don't start screaming when editorial cartoonists draw them as well." 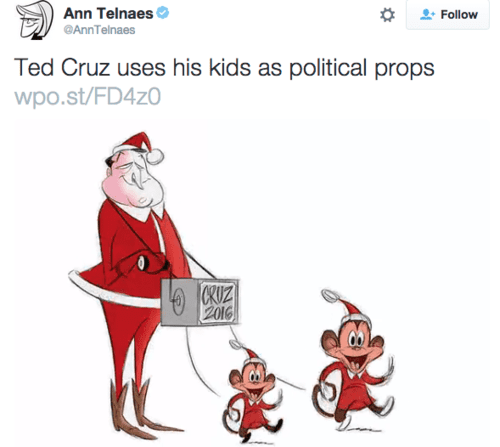 Politicians in both parties put their children in political ads and policy debates all the time. Over the years, the Obamas' daughters have made strategic campaign cameos for their parents during both of their dad's presidential election drives, the Obamacare debate, and their mom's East Wing anti-obesity initiative.

The Clintons did the same with their daughter. Now, at every available campaign Kodak moment, those geriatric masters of Democratic political stagecraft are currently welded to their baby granddaughter like toddlers tethered to a binkie dipped in Pixy Stix.

Imagine the storm of protest that would have rained down on any prominent conservative political cartoonist who caricatured Sasha, Malia, Chelsea or Charlotte as circus animals performing for their parents for maximum electoral gain.

Democrats surround themselves daily with human Snuggie blankets of other people's babies, toddlers, tweens and teens to push gun control, endless expansions of government health care programs and entitlements, and abdication of our borders and immigration laws. But instead of decrying this blatant political child abuse, "progressives" attack the critics of these debate-stifling tactics for ... hating on children!

When the media's selective civility police argue that children should be "off-limits" in politics, what they really mean is that prop-a-palooza should only be allowed when the children promote politically correct causes and left-wing politicians.

The Washington Post deleted the cartoon that maliciously turned two innocent daughters of a Republican candidate into dancing monkeys—but not before revealing itself to be run and staffed by drooling moral infants in soiled, double-standards diapers.