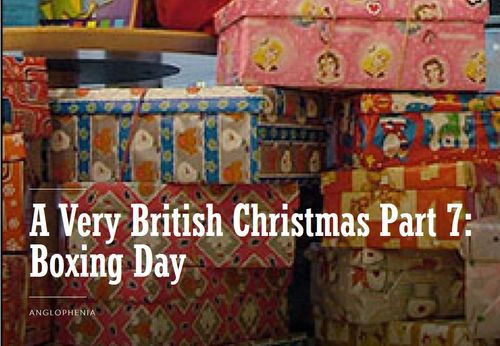 Part of what the French call "The Great Replacement" of the white nations is the imposition of alien celebrations. The most obvious is Cinco de Mayo, lovingly chronicled by VDARE.com here, exposed as a Hannukah-style fake by our Allan Wall here.

To see how it works, note that Christmas this year falls on a Tuesday, so Boxing Day would be on a Wednesday.  The British would conclude that there’s hardly any point in working on Christmas Eve or for that matter going back to work just for a two-day week (Thursday or Friday).  This means that many will have been off work from Friday December 21 until Tuesday January 2. Indeed, I see that British blogger Robert Henderson (here and here) has suspended his indispensable daily U.K. press clippings email service for precisely this period.

Given that Democrats like Bernie Sanders have obviously forgotten the lessons of the 1970s and propose reimpose high marginal tax rates on income, Americans will need this Boxing Day opportunity too.