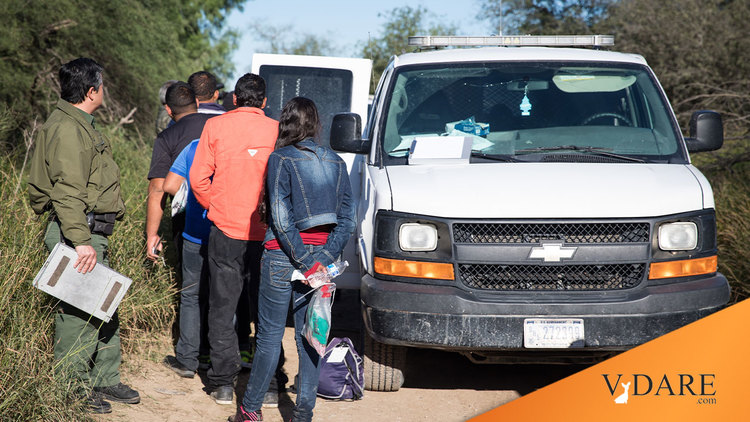 The evidence is in. Case closed. There can be no denying that illegal aliens entering the United States know more about the ins and outs of the federal immigration bureaucracy—and how to manipulate it – than the average American.

An e-mail report I received recently from a self-identified Customs and Border Protection (CBP) inspector on the Mexican border says it all. The Agent reports a significant change of tactics by the smugglers of non-Mexican illegals.

As the reader is a federal employee, I provide the following disclaimer:

"The opinions expressed on this page do not in any way represent the official position of the DOJ, EOIR, BIA, DHS, CBP, ICE, USCIS or any other branch of the United States government ... but maybe they will someday."

"I hope you might want to know how things are going on the Texas-Mexico Border. Things are really bad. Everyday it gets more ridiculous.

"As an Immigration Inspector I talk to people all day long. In one day I had 2 Hondurans, 1 Guatemalan and 2 El Salvadorans all come up to me and tell me they had just crossed the river illegally. They all have just one request: "¿Me puedes dar un permiso para entrar a los Estados Unidos?" [Can you can give me a permit to enter the United States?]

"None have visas, they usually don't even have a passport. But, they all have the address of a friend or family member that is already in the U.S. illegally that they want to stay with. Most already know where they are going to work and how much they will be paid. As these people have already crossed illegally and are entering the Port of Entry from the north, I am obligated to call Border Patrol.

"I'm sure you all know what Border Patrol is obligated to do—they must parole the illegal alien into the U.S., if they are from countries Other Than Mexico [OTMs], and give them a date to appear in court for their Deportation hearing.

"We also know that the vast majority, some estimate 85%+ never show up to court. Would you?

"Are you ready for this? The Coyotes no longer simply drop the illegals off on the other side of the river. For a few extra dollars they take them right to the fence of the Border Patrol station. When they arrive there they give the B.P. Agents a courtesy call from their cell phone and let them know how many people are waiting for them outside…OTMs have to be given a Parole into the U.S. They are most times even given transportation to the bus station."

(Because Mexico is a contiguous country, Mexican illegals can be more easily deported. Rather than face detention, they usually voluntarily go back—and try again.)

"Several people, including the illegal aliens, have told me how they cross the river. There is a little boat that makes several crossings a day. I suspect he has a regular schedule, to ferry people across. Several have even told me, "Yo cruce en la lanchita amarilla." [I cross in the yellow launch].

"Please help us. We are here on the border fighting a losing battle. It will not get better until people in the U.S. know the truth.

"Please write more about what is going on. Most U.S. citizens don't realize how many illegal aliens there are in our country. They don't understand what is happening to our country."

This brazen change in tactics proves that illegal alien smugglers and their lawyer allies in the Treason Lobby are now coaching their charges well. They know that by reporting to the Border Patrol, the illegals get into the system and can apply for employment authorization – which is always granted pending their hearing. If they choose to show up at their hearing, they have an excellent chance of stalling deportation indefinitely. They may even get legal status.

The root cause of this madness is how the federal government goes about deporting illegal aliens – above all, the U.S. Immigration Court system of the Executive Office for Immigration Review (EOIR) within the Department of Justice.

When it comes to what's wrong with the deportation system in the United States, all roads lead to the EOIR.

I've been writing about the EOIR for the past three years. I've called for the 'deportation through litigation' system to be abolished. Author Michelle Malkin agreed in the conclusion of her book, Invasion.

A delay-ridden EOIR Immigration Court hearing system (with access to a smorgasbord of litigation in the federal district courts and circuit courts of appeal) for the deportation of every single illegal alien who manages to set foot on American soil – coupled with the catch-and-release non-detention policies of the Department of Homeland Security's (DHS) Immigration and Customs Enforcement (ICE) division – is the recipe for an open border.

The Treason Lobby has known this for years. Immigration detention centers on the Mexican border are little more than new Ellis Islands. Their only apparent function is to release illegal aliens for the supposed purpose of appearing somewhere else for an EOIR Immigration Court hearing someday.

Fortunately, the miracle of the internet has allowed patriotic VDARE.com readers and other whistleblowers to communicate and get the message out to the public . . . safely and confidentially [E-mail Juan Mann].

My correspondent needn't worry. I'll keep writing about the federal immigration litigation bureaucracy and all of its fallout on America. In addition to my weekly column here on VDARE.com, I have now joined the ranks of the group immigration blog hosted by Michelle Malkin.

The reality of America's open border will be known outside of the ranks of illegal aliens, their smugglers and allies in the Treason Lobby, as well as the few patriotic Americans who are trying to do something about it.

The truth shall set us free!