It’s a rare thing for any California institution to backtrack on a dumb program for illegal aliens these days, but the persistent agitation of Assemblyman Tim Donnelly accomplished just that.

The Really Bad Idea was UCLA creating its own special college for unlawful foreign students at a significantly lower cost than what the in-state Americans pay. 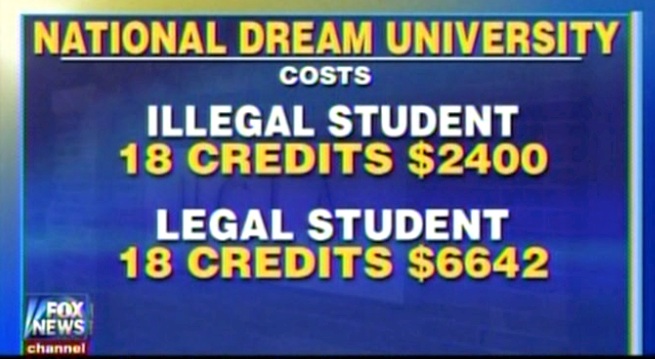 The high level of taxpayer subsidy was not the only problem however: the project was specifically designed to educate more community organizers, shown by its requirement that applicants must “demonstrate commitment to immigrant/labor rights and social justice.”

(Even without DREAMer U, it would be interesting to see an analysis of how many aliens are majoring in ethic whatnot rather than useful subjects like medicine and science.)

A Fox News discussion from a few weeks back highlighted the aspect of training leftist activists:

Thanks to Tim Donnelly for getting this turkey axed — at least for the time being.

EXCLUSIVE: Following scrutiny from a California lawmaker, the University of California is shutting down a controversial college program for illegal immigrants, though the reasons for the closure are not satisfying critics of the so-called National Dream University.

Critics of the plan of the so-called National Dream University (NDU) welcomed the decision to stop the program, though they weren’t satisfied with the reasons given for its closure.

“I believe the procedural issue gave UCLA an out, but it was public pressure and public scrutiny during such difficult economic times that was ultimately turned Dream University into a nightmare for UCLA President and regents,” says California Assemblyman Tim Donnelly (R-Twin Peaks).

NDU earlier this summer began actively recruiting those seeking a college degree and a career in activism focused on immigration issues. Its website, which has since been taken down, promoted “an educational opportunity to those who have demonstrated leadership and commitment to the immigrant and/or labor rights movements {with admission} open to everyone, regardless of their immigration status.”

Operated by the UCLA Labor Center and the National Labor College, NDU would have offered credit for online courses in immigrant rights and political advocacy. At about $2,500, tuition was thousands less than what legal residents pay to attend UCLA, one of California’s premier public universities.

Assemblyman Donnelly was the first lawmaker to publicly express outrage. “Here, you’re going to have the taxpayers subsidizing it, so that illegal aliens can go to college, have their own little college, teach their own ideology, and all at taxpayer expense,” he said in August.

In an email to Fox News, a university spokesman admitted UCLA was “unaware of the courses to be offered” by NDU. Fox News has repeatedly reached out to the UCLA professors who, on their own, established NDU, with no oversight from university administrators.

When asked for comment, Kent Wong, director of the UCLA Labor Center, hung up on Fox News several times. He does, however, speak frequently in support of so-called DREAMers.

At one rally, he told an audience of cheering young activists “you will go onto become lawyers and teachers and doctors and members of the U.S. Senate to replace those old white men.”

In a response to a query by Donnelly, University of California President Mark Yudof said the two research groups behind NDU did not go through the proper channels, and therefore would not be allowed to continue the program.

The certificate program, he wrote, “was negotiated without the consultation or approval of UCLA’s academic and administrative leadership. Therefore, the agreement has been declared void. As a result, UCLA has asked the Labor Center to immediately suspend all work on the National Dream University.”

UCLA has not disavowed Kent Wong, however, and the closure of NDU does not mean there could be future activist programs.

“UCLA’s actions do not preclude a future agreement between the Labor Center and National Labor College,” Yudof wrote. “Any such future agreement will require the completion of a formal proposal process with approval from the appropriate academic and administrative leadership.”

Still, Donnelly, who, as a member of the state’s appropriations committee approves funding for UC schools, is glad to see NDU disappear.

“I think that given the news coverage of this story by Fox News and others, the inquiry by my office, and the National Labor College’s financial difficulties, UC’s President decided this is not the way to expend the precious limited resources, which should be available to California citizens rather than illegal aliens, no matter how deserving they may seem.”