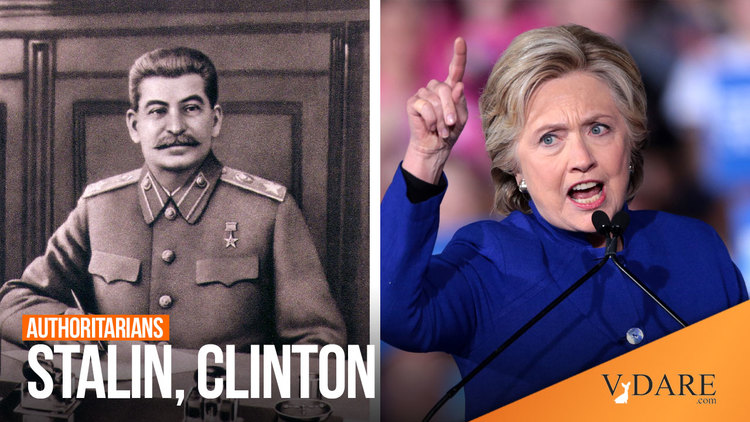 COVID, Canada, Russophobia—Left Wing Authoritarianism Is Busting Out All Over

From COVID to Canada to the current outbreak of Russophobia—eerily similar to the Germanophobia that preceded World War I—Left-Wing Authoritarianism is bustin’ out all over. (Which means, of course, that cuckservatives are falling in line [Pence: There's no room in GOP for "apologists for Putin," Axios, March 4, 2022].) Even academe is recognizing the phenomenon, although it has not yet entered public debate, despite VDARE.com’s best efforts.

Recently, I reported on a new study which had comprehensively overturned the conventional wisdom that only conservatives are capable of possessing an “Authoritarian Personality.” This was originally argued by the “Frankfurt School” (that is Jewish Cultural Marxist) philosopher Theodore Adorno (1903-1969) in his extremely influential 1950 book The Authoritarian Personality. According to this view, being right-wing is, in effect, an externalization of being mentally ill and thoroughly antisocial, and is the only route to “authoritarianism.”

But the fact is that “Conservatives” are lower in mental instability and higher in impulse control and altruism than Leftists, as a study unwittingly showed some years ago [The nature of the relationship between personality traits and political attitudes, by B. Verhulst et al., Personality and Individual Differences, 2010], despite a “coding error” causing it to, at first, report the opposite correlation.

The most current example: the extraordinary attack on Russia, largely by private actors since the U.S. has not actually declared war. But note that Hillary Clinton is arguing that GOP resistance to any aspect of the Democratic agenda is an attack on “Democracy,” implying that it should be repressed like the Jan. 6 Mostly Peaceful Protestors by Garland Gulag methods [A State of Emergency for Democracy—By attacking the rule of law, Republicans are helping Putin and Xi., Hillary Rodham Clinton and Dan Schwerin, Atlantic, February 25, 2022].

In an interview on Morning Joe, she accused Ukraine War skeptics, Republicans, and of course, Donald Trump, who won the 2016 election on a platform including détente with Russia, of “literally giving aid and comfort to an enemy of freedom and democracy” [Hillary Clinton repeatedly suggests Donald Trump, Republicans enabling Putin aggression during MSNBC interview, by Brandon Gillespie, Fox News, February 25, 2022].

However, Canada’s Justin Trudeau, “Prime Minister of a Thousand Black Faces,” must rank as one of the most extreme Left-Wing Authoritarians in any government today. His astonishing attack on the trucker convoy is now overshadowed, but it is worth reviewing And, naturally, he was backed up by a sadistic army of Alphabet fanatics and Regime Media publicists [Tucker Carlson: “Journalists” Are Complicit In The Death of Canadian Democracy, by Hunter Wallace, Occidental Dissent, February 15, 2022].

The Canadian regime was unprepared for the massive peaceful protests and, in a sense, briefly lost control. The backlash has involved a massive reassertion of centralized control, and a huge level of aggressiveness and violence in the treatment of unarmed political opponents.

Naturally, nothing like this happened to violent BLM Protestors or their Canadian imitators, who set fire to churches to protest  the Kamloops Residential School Cemetery Hoax, as they were not challenging a Leftist government. They were encouraging it to be even more left wing and intimidating its potential opponents.

Trudeau imposed an Emergencies Act, i. e., martial law—that in effect banned what’s left of free speech and free association, and banned political rallies. It could be used to prevent Canadians leaving the country. It could freeze their assets without a court order. It froze bank accounts belonging to ordinary citizens who donated small amounts of money to the truckers when it was perfectly legal to do so, as a Canadian MP has pointed out.

It allowed tow truck drivers who refuse to tow away protesting truckers to be arrested. Indeed, those who didn’t immediately obey the police—for example by desisting in honking their horns, as this contributed to an atmosphere less than entirely obedient to Trudeau—was to be detained.

Canada is also passing new laws to stop people spending their own money to crowd-fund protests by classifying these, in effect, as “terrorism.”

This is all rather like the backlash after the English Peasants’ Revolt of 1381. The English government was almost toppled by the protests (which in that case were extremely violent) so there was a savage reaction from the shaken elite: heavy restrictions on free speech, free movement, freedom of religion and free association which lasted for centuries.

Is mental instability and paranoia on display in this backlash? Trudeau and his supporters insisted that the peaceful protestors are “terrorists” as well as Nazi sympathizers somehow backed by Putin’s Russia, despite there being no evidence for this whatsoever. Trudeau himself implied that Conservative members of Canada’s House of Commons were Nazi sympathizers [Trudeau accuses Conservative MPs of standing with ‘people who wave swastikas,’ by John Tasker, CBC, February 17, 2022].

The counter-protestors against the truckers also, oddly, decided the truckers were “transphobic,” which can only be an expression of their paranoia about those who “trigger them” by challenging a government which they regard as on their side.

As British libertarian commentator Brendan O’Neill has observed, the counter-protest was, basically, expressing a hatred of working class white people—who tend to have “conservative” social views in some ways—being able to express their opinions. These opinions are seen as inherently bigoted and potentially violent. They are stupid, lazy, and uncouth and, therefore, a danger to civilized Woke people. That is why they are working class, despite all of the “White Privilege” which should allow them to sail into the “middle class.” Thus, we see a clear intolerance of any political opposition. As O’Neill put it:

There was at least a semi-conscious element to this spectacular non-sequitur on the streets of Ottawa—the elite counter-revolters were essentially saying that identity is now more important than class, that issues like trans rights now thoroughly trump workers’ rights, and that being ‘left-wing’ no longer means supporting the masses against the state, but rather is about reprimanding the masses for their supposed wrongthink and siding with the state against the people.

(Similarly, polls show opposition to intervention in Ukraine is highest among low-income groups.)

"If a wider war breaks out in Europe, should the U.S. military be involved?"

And the delight in the suffering of political opponents was no clearer than the pleasure of hacker Aubrey, who criminally hacked GiveSendGo, leaking the details of those who had donated to the peaceful trucker protest.

Yes, I tossed the trucker. I hacked GiveSendGo, and I’d do it again. I’d do it a hundred times. I did it. I did it. Come at me. What are you going to do to me? I'm literally a famous f---ing cyberterrorist, and you think that you can scare me?

This act of criminality has resulted in people losing their jobs and their businesses being threatened with violence by the Alphabet Mob [Mainstream Media Leverages Hacking of GiveSendGo to Expose Convoy Donors in Canada, Causing Layoffs, by E. Ronmdon, El American, February 19, 2022].

The Trudeau Regime ticks every “Left Wing Authoritarian” box, according to the research in this area.

American patriots have already faced demonetization, deplatforming and even jail. With the Left in control here too, this is likely to increase.