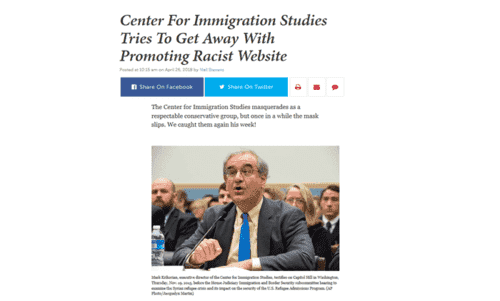 Over at Redstate, Neil Stevens, who is the kind of "conservative" who likes playing CultMarx enforcer has a piece called Center for Immigration Studies Tries to Get Away with Promoting Racist Website Posted at 10:15 am on April 26, 2018.

His charge—that CIS, emailing interesting articles on immigration, included one by Jesse Mossman, which was cross-posted on Unz.com. I haven't seen the email, so I don't know which one they linked to. Of course, CIS includes a disclaimer saying "This email includes a wide range of views, provided for educational purposes. Inclusion does not constitute an endorsement by the Center for Immigration Studies" and of course no one listens to them.

CIS has been attacked before for including VDARE.com's immigration coverage, much of which is unique, and I believe they may have cucked and stopped including us. Neil Stevens goes on with a lot of what we call "Ransom Note Racism"—clips from old articles, out of context.  Unz comes in for the same treatment.

So which site was CIS reading to get this article by this completely unknown writer? The racist Vdare, or the anti-Semitic Unz.com? Which site does CIS use to inform its donors? How the heck do you ever slip a site like that among sites like National Review, Conservative Review, and The Guardian?

The Guardian? The Guardian is respectable? The Guardian spent years supporting the Soviet Union, Red China, and North Vietnamese. For most of my life, they've been the focus of evil in the modern world.

This is not the first time Neil Stevens has done this. 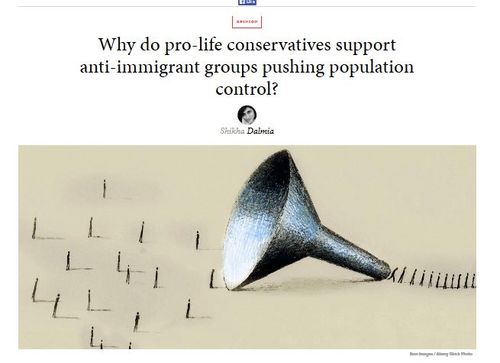 A while back, Indian libertarian/leftist Shikha Dalmia was urging National Review to purge Mark Krikorian by the same weird "guilt by association" process. This is usually done to people who aren't actually associated. At the time Washington Watcher  wrote

But gullible and/or opportunistic Cuckservatives are endorsing her. Neil Stevens of Red State declared that National Review must “Dump Krikorian” to ensure that it maintains its hard earned respectability status. At the same time, he echoes Dalmia’s claims that he supports the “movement to secure the border, and restore fairness and law-and-order to our immigration policies.” His concern is that Krikorian is a “Trojan Horse” to the conservative cause. [National Review is getting one thing badly wrong on immigration, May 17, 2016].

But despite Stevens professed support for securing the borders, searching his archive for immigration articles shows nothing but concern trolling immigration patriots with articles like

This last was a reference to Jason Richwine, who was fired from Heritage for having studied immigration's effects on national IQ for his dissertation. It's not likely that Stevens will be fired from RedState for hating us, Ron Unz, or Mark Krikorian. He may have been fired—since that quite recent article—for hating Donald Trump, and by extension hating America.

Blogger and prosecutor Patterico reports a purge at RedState, aimed at people who hate Trump:

The rumors are true. There has been a mass firing at RedState, and those let go (including me) are all Trump critics. His supporters remain.

Howe gave it new identity when the shredded GOP took the old one from conservatives.

Every one of those guys is either a cuckservative or a neoconservative, more interested in policing "racism" than in any kind of conservative agenda. Good riddance!