INSTAPUNDIT And The BOSTON HERALD On Guatemalan Gang Rapists

Instapundit does one of his quick linking blogs:

DOING JOBS AMERICANS WON’T DO: Illegals held in vicious Framingham rape. Cops: Boyfriend fought off Guatemalan attackers to rescue pinned-down girlfriend. Too bad he didn’t shoot ‘em, but it’s Massachusetts where only criminals can have guns.

Related: Howie Carr: ‘Undocumented’ are running amok with no recourse. “So now we find out the four ‘Framingham men’ charged with grabbing an American woman off the street and then raping her in front of her boyfriend last weekend are in fact illegal aliens from Guatemala.”

This is strong stuff for a mainstream conservative blogger, but it's even stronger stuff for an actual newspaper. Let me explain—when I get an email with a subject line something like "Illegals held in vicious Framingham rape" I'll click through and the headline will be something like Four accused of kidnapping, sexually assaulting woman in Framingham, which is the headline on the same story on MtroWestDailynews.com. However Illegals held in vicious Framingham rape | Cops: Boyfriend fought off Guatemalan attackers to rescue pinned-down girlfriend [By O’Ryan Johnson and  Joe Dwinell, March 19, 2016] is the actual headline and subhead in the story in Boston Herald,  the Boston Herald being an actual newspaper with a circulation of 95, 000 paper copies  daily: 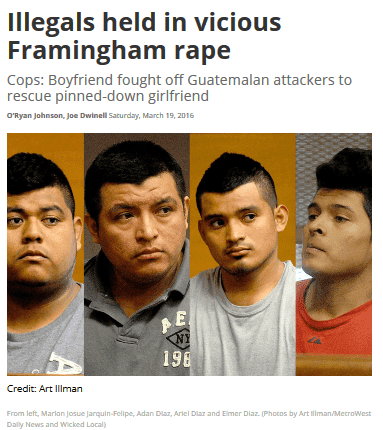 I was going to compare the headline on the same story in the liberal Boston Globe, but the Boston Globe has made no mention of the story at all. Gateway Pundit reports that "So far, there has been no national media coverage of this heinous attack in which previously deported illegal aliens have been charged."

This coverage is so much better than the New York Times and the Globe that I'm almost hesitant to make any suggestions about improving it, but here are couple of suggestions for mainstream media sources who have decided to "go there".

If reporters are unsure  on how to cover this, they can take their lead from MSM coverage of the attempted murder of police officers: "White Policeman Shoots Black Teen."