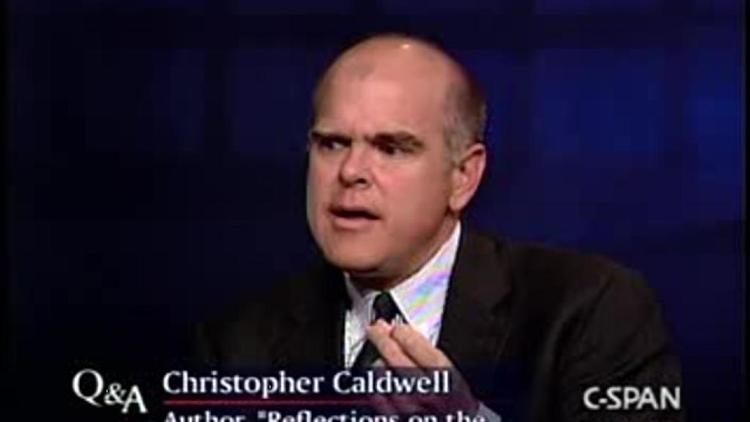 Christopher Caldwell's Reflection On The Revolution In Europe: Now He Tells Us? 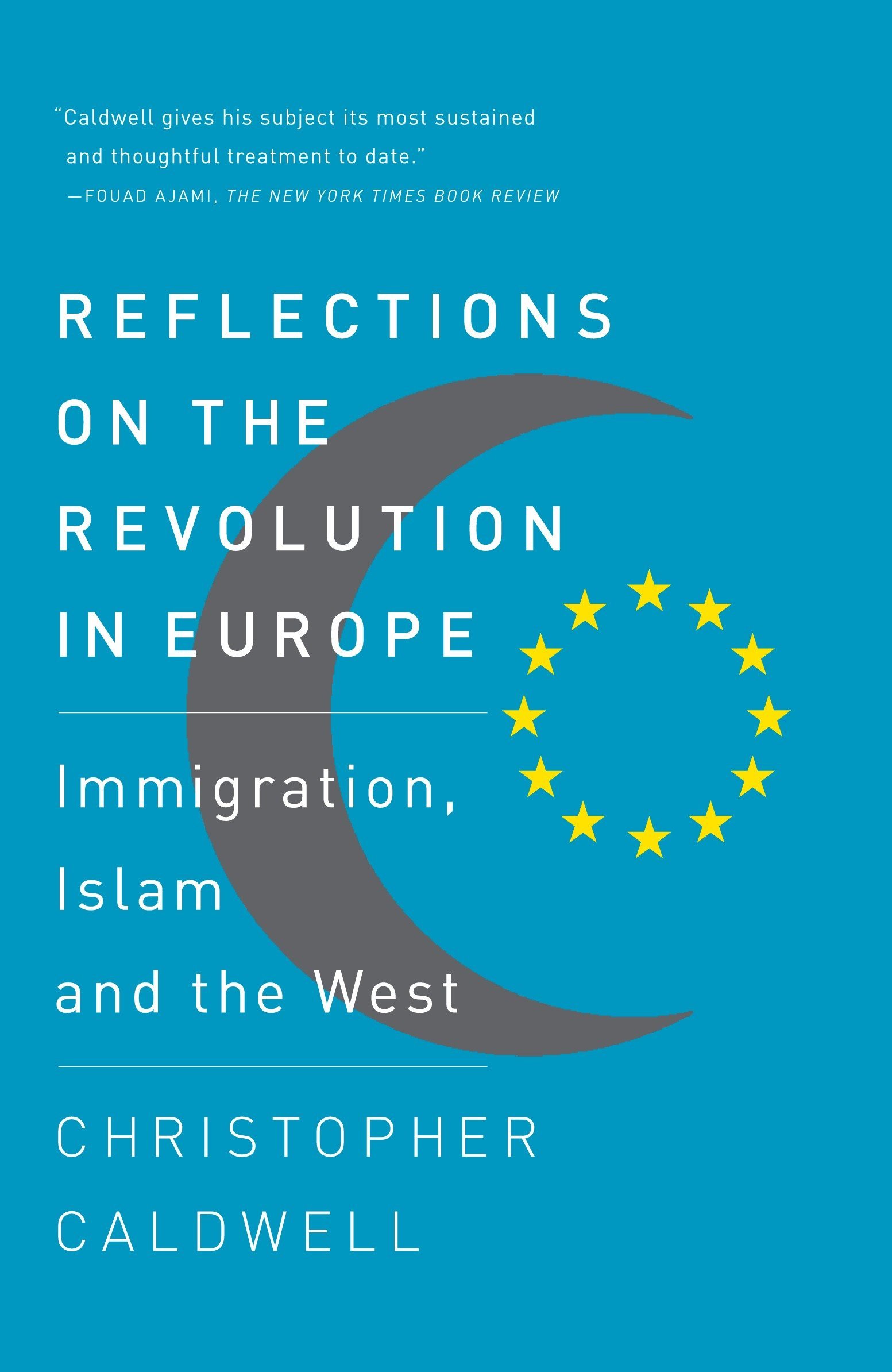 Christopher Caldwell's Reflections on the Revolution in Europe: Immigration, Islam, and the West is an important and surprising book.

Granted, VDARE.com readers won't see much that's new. In essence, Caldwell's Reflections is a Brimelovian vindication of Enoch Powell, the brilliant Tory who warned against immigration in a prescient (and thus notorious) 1968 speech that began "The supreme function of statesmanship is to provide against preventable evils".

Caldwell points out in his opening pages (which you can read here):

"Although at the time Powell's demographic projections were much snickered at, they have turned out not just roughly accurate but as close to perfectly accurate as it is possible for any such projections to be: In his Rotary Club speech, [November 16 1968] Powell shocked his audience by stating that the nonwhite population of Britain, barely over a million at the time, would rise to 4.5 million by 2002. (According to the national census, the actual "ethnic minority" population of Britain in 2001 was 4,635,296.)"

Readers who get their views from the MainStream Media, though, will be startled by how gracefully—yet bluntly—Caldwell delivers an intellectually cohesive assault on the conventional wisdom of the diversity dogma.

Reflections is also a model for how a working journalist can transform years of old articles researched on scores of trips to Europe into a stylish book. Caldwell's solution is to enhance his prose style with aphorisms worthy of G.K. Chesterton.

For example, in Caldwell's original February 27, 2006 Weekly Standard article on Nicolas Sarkozy, The Man Who Would Be le Président, he discussed Sarkozy's call for affirmative action in France to appease riotous Muslims:

"It can be argued that France needs such measures desperately, … but, … Sarkozy shows a bit of the naiveté of, say, Hubert Humphrey in 1964 when he implies the program would be only temporary. … How long would the program last, then? Twenty years? 'No, twenty years is too long.'"

In his book, however, Caldwell adds this memorable dictum in reply to Sarkozy's Continental innocence about America's experience:

(I suspect that when Sen. Lindsey Graham decided to vote for Sonia Sotomayor, he was saying something like this to himself, just less elegantly.)

"This logic is not lost on white people in the United States, and it will likely not be lost on European natives."

The courage that Caldwell displays in Reflections is unexpected. Among conservative literary intellectuals, Caldwell has pursued mainstream approval with perhaps the most success. For example, in a June 1998 Atlantic article, The Southern Captivity of the GOP, this Harvard English Lit major argued that the Republican Party appealed too much to white Southerners (whom he described as "U-Haul-renting denizens of two-year-old churches".)

"Christopher Caldwell is a columnist for the Financial Times, a contributing writer for the New York Times Magazine, and a senior editor at The Weekly Standard."

(You can't blame him; he and his wife, who is Robert Novak's daughter, have five kids.)

Unexpectedly, Caldwell takes the arrogant bluster of European intellectuals and patiently and quietly extracts the simple silly-mindedness at its heart:

"Bizarrely, as immigration began to change Europe at its economic and cultural core, the political vocabulary remained the same as when immigration had been a fringe phenomenon. People kept talking about restaurants."

He points out the endless contradictions of the cult of tolerance:

"The policing of tolerance had no inbuilt limits and no obvious logic. Why was 'ethnic pride' a virtue and 'nationalism' a sickness? Why was an identity like 'Sinti/Roma' legitimate but an identity like 'white' out of bounds? Why had it suddenly become criminal to ask questions today that it was considered a citizen's duty to ask ten years ago?"

And yet, as the Danish Cartoon Riots of 2006 showed, the absurdity of Europe's ever-growing restrictions on freedom of speech about immigration—both legalistic (what Caldwell calls "the criminalization of opinion") and vigilante (enforced by young Muslim thugs)—aren't funny. As Caldwell explains, "Immigration exacts a steep price in freedom":

"A new, uncompromising ideology was advancing under cover of its own ridiculousness—not as the Big Lie of legend, perhaps, but as something similarly ominous that might be called the Big Joke."

Caldwell is extremely good at disentangling the ideological evolutions—the "He who says A, must say B" thought processes—that got Europe into its Muslim mess.

"The Holocaust has in recent decades been the cornerstone of the European moral order. … Under the pressure of mass immigration, however, post-Holocaust repentance became a template for regulating the affairs of any minority that could plausibly present itself as seriously aggrieved. … Once on the continent, Muslims took up a privileged position in any public debate on minority rights: they, too, were 'victims.'"

This, of course, is an unmistakable echo of VDARE.COM Editor Peter Brimelow's opening to his much-denounced book Alien Nation: Common Sense About America's Immigration Disaster back in 1995:

"There is a sense in which current immigration policy is Adolf Hitler's posthumous revenge on America. The U.S. political elite emerged from the war passionately concerned to cleanse itself from all taints of racism or xenophobia. Eventually, it enacted the epochal Immigration Act (technically, the Immigration and Nationality Act Amendments) of 1965.

"And this, quite accidentally, triggered a renewed mass immigration, so huge and so systematically different from anything that had gone before as to transform—and ultimately, perhaps, even to destroy—the one unquestioned victor of World War II: the American nation, as it had evolved by the middle of the 20th century.

"Today, U.S. government policy is literally dissolving the people and electing a new one. You can be for this or you can be against it. But the fact is undeniable."

Europe's elites needed a new minority in order to feel morally superior to European commoners. And the Muslims agreed.

"[M]any Muslims felt their community offered native Europeans a more appropriate object than the Jews themselves for moral self-examination and moral self-flagellation. An increasing number of Muslims saw themselves, in fact, as the 'new Jews.'…"

Ironically, Europe's obsession with the Holocaust has stimulated the outbreak of anti-Semitic violence by European Muslims in this decade:

"As the Jews accumulated 'rivals' with an interest in dislodging them from their position as Europe's top victims, the system was suddenly turned inside out. The ideology of diversity and racial harmony … now became the means through which anti-Jewish fury was reinjected into European life. … If the Muslims were the new Jews, apparently, then the Jews were the new Nazis."

Caldwell sums up with a quote from French philosopher Alain Finkielkraut:

"I think that the lofty idea of 'the war on racism' is gradually turning into a hideously false ideology. … And this anti-racism will be for the twenty-first century what communism was for the twentieth century: a source of violence."

It would be interesting to know whether Caldwell was always a secret VDAREite regarding European immigration, but had his logic emasculated by his periodical editors.

Or did he not come to these logical conclusions until he tried to make sense of his research while writing this book?