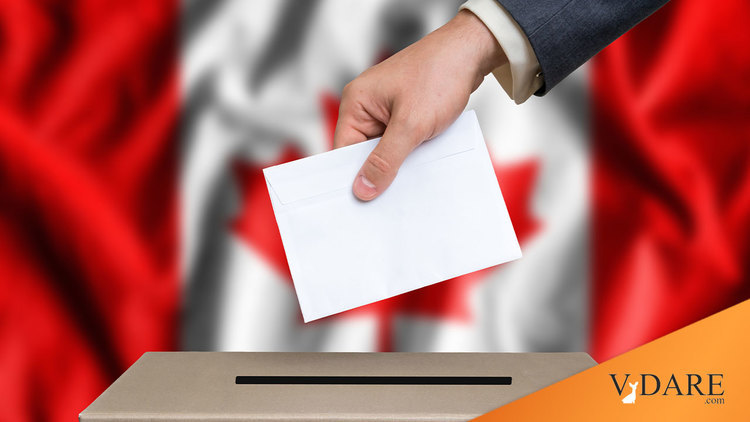 Canada's National Question: The Answer Is No

But the big change in Canadian politics remains gradual yet ineluctable: the emerging answer to Canada's version of the National Question: whether it can survive as a nation-state, the particular expression of a particular people. Canada as a single polity—A mari usque ad mare [from sea to sea] as it says on Canada's coat of arms—is doomed.

Admittedly, its dissolution is taking longer than I predicted in this space two years ago. (In my defence, I hadn't counted on Quebec's separatist Parti Québécois choosing an openly homosexual coke-sniffer for its leader. Guess how that worked out.) But now more than ever, Canada is not a nation (with one caveat, of which more later). Neither is it a "community of communities," as former PM Joe Clark once claimed. No, Canada is an ongoing blackmail/bribery game, a mere political contrivance, a conglomeration of seven increasingly dissimilar and fractious regions—Newfoundland, the Maritimes (New Brunswick, Nova Scotia, Prince Edward Island), Quebec, Ontario, the Prairies (Manitoba, Saskatchewan, Alberta), British Columbia and the Arctic (Yukon, Northwest Territories, Nunavut).

And if that weren't enough, our three largest cities, Vancouver, Toronto and Montreal, will soon to be majority "visible minority," in a country where over 80% of the population remain members of the barely-tolerated white majority.

Stephen Harper's Conservative Party was re-elected to another minority government Tuesday. The numbers:

Newfoundland (seven seats) dumped its three Conservatives, because Premier Danny Williams demanded it. Williams hates Stephen Harper because he won't let the province keep all its newfound oil royalties and continue to grab its eternal annual fortune in transfer payments in recognition of its "have-not" status.

The Maritime Provinces (25 seats), despite their history of selling their seats to the highest bidder, elected a bare plurality of Liberals, and the plunge in the Liberal popular vote presaged a disastrous showing country-wide. Given local jealousies, it is entirely possible Maritimers voted against Newfoundland's Danny Williams, who is remarkably arrogant for a man who leads a province where barely half the population (51%) holds a job.

As its leader Gilles Duceppe boasted, the Bloc took a majority of Quebec seats for the sixth straight election. Politically, Quebec (75 seats) has already left Canada.

The Liberal Party did not win a single seat in Francophone Quebec, a complete change from the days of Pierre Trudeau, suggesting that the party's historic raison d'être has disappeared.

The Conservatives, however, gained no seats in Quebec, despite Harper's unprecedented pandering: giving the province (now only 22% of Canada's population) its own seat in UNESCO, guaranteeing it a permanent duopoly in the agency that regulates the broadcast media, offering it a separate Criminal Code (blatantly unconstitutional) and compelling his party to recognize Quebec as a "nation" in the House of Commons.

Of course, Francophone Quebec is a nation, albeit without a state—it's the caveat I mentioned earlier. But equally recognizing English Canada as a "nation" would be unthinkable. That would be "divisive," even "racist".

As Peter Brimelow declared back in 1986 in The Patriot Game, the real question for English Canada is not whether Quebec should separate—but whether it should be expelled. (Since he wrote, of course, this is exactly what the Czechs did to the Slovaks).

The Conservatives made their largest gains in Ontario, Canada's most populous province (106 seats). The Liberals were reduced to their ethnic redoubt of Toronto, Ontario's largest city. My friend Jay Currie has dubbed the Liberals "the Toronto Party". But "the Immigrant Party" is closer to the truth. Between Toronto and Montreal, their other ethnic redoubt, the Liberals garnered 41 (54%) of their total seats.

The Liberals were almost wiped out on the Prairies, taking two of 56 seats. Leader Stéphane Dion's climate-change "Green Shift" (think Al Gore with carte blanche) succeeded only in shifting Liberal votes everywhere else.

And the Liberals did almost as badly in British Columbia (32 seats), taking only five and running behind the Green Party in no fewer than 10.

Dion was the big loser on Tuesday. He is easily the worst Liberal leader of my lifetime. A peevish academic, he manages to be both effete and epicene. His own people despise him, and his obstinate refusal to master English—despite spending a year at Brookings in Washington—made him an obvious non-starter in English Canada. His party is broke and crippled by internecine feuding.

But Conservative leader Harper was not a big winner. For the third time in a row, he failed to win the majority that seemingly should have been his for the asking. Why not? Well, it's not simply that he rejects the Sailer Strategy; it's more that he's the anti-Sailer candidate. Harper is a Bush clone, an unregenerate neocon whose only known enthusiasms are Israel and American global hegemony. Like Bush, he has worked assiduously to attenuate the Conservative base. His ethnic pandering reached a new low: apologizing (and paying redress for) the Chinese head tax, which ended in 1923; apologizing for turning back a boatload of Sikhs (in 1914!); promising even-higher immigrant levels, even as the proportion of skilled immigrants falls to 17.5% of the total; promising to force the provinces to recognize immigrant medical and other credentials; standing foursquare behind Canada's totalitarian "hate speech" law.

Harper's immigration enthusiasm certainly hurt him in Quebec. Harper's ethnic capo, junior immigration minister Jason Kenney, condemned the Bloc for sending "dog whistle messages" to those who "are against the growing ethno-cultural diversity in greater Montreal in particular and in Quebec in general." [BQ desperate, Tory minister says Playing to xenophobia, intolerance, by Elizabeth Thompson, The Montreal Gazette, September 17, 2008] But the benighted group who responded to the whistles plainly includes the entire French-speaking nation in the province.

But perhaps even embracing the Sailer Strategy in Anglophone Canada wouldn't have been sufficient. The Canadian "National Question" is peculiarly complex. Kenney's faux pas reveals the impossibility of the task Harper—or any federal party leader—faces in the confederation of regions that is Canada. He cannot both suck up to immigrants and appeal to a Quebec that is openly rejecting multiculturalism. He cannot stand as the champion of the West while continuing to shovel unearned billions to feed the inexhaustible appetites of the East. He cannot claim to stand for "unity" while insisting that one linguistic group gets to be a "nation," while the other gets to pretend it doesn't exist.

Canada is a political circle that can't be squared. The people(s) of Canada are coming to realize it. On Tuesday, voter turnout reached an all-time low of 59%. The reckoning is soon at hand.