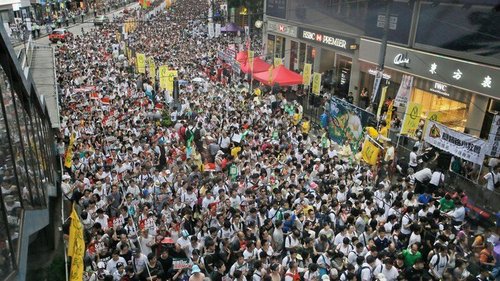 Americans are caught up with the Ebola crisis and the Secret Service lapses in protecting the White House and the president's family. But what is transpiring in Hong Kong may be of far greater consequence.

Last weekend, Hong Kong authorities used pepper spray and tear gas to scatter the remnants of a student protest of the decision to give Beijing veto power over candidates in future elections.

The gassing was a blunder. Citizens poured into the streets in solidarity with the protesters. Hong Kong police lacked the nerve or numbers to remove them. The People's Liberation Army stayed in its barracks. Crowds clamoring for democracy controlled the city.

Now, on Beijing's orders, authorities have adopted a "wait-them-out" strategy, assuming the silent majority in Hong Kong will get fed up with the Occupy Central protesters, as the Americans did with the Occupy Wall Street protesters.

Beijing, however, is understandably nervous.

To allow students to block the city center and impede traffic shows weakness. Hong Kong's reputation as a financial center and tourist attraction will suffer. And Beijing cannot permit this to go on too long without risking supportive protests erupting on the mainland.

Nor can the students be allowed to force Hong Kong to give up Beijing's veto of candidates. To capitulate would expose President Xi Jinping as a leader who can be broken by street action. To permit that perception would imperil Xi's standing with Beijing's hard-liners, and potentially the regime itself.

Thus if the protesters do not vacate Hong Kong's streets soon, they may have to be removed. And Beijing is not a regime to recoil from force if it has run out of other options.

The last democracy protests, 25 years ago in Tiananmen Square, were crushed by tanks, with hundreds dead. The Falun Gong religious movement was crushed. Protests by Tibetans and Uighurs demanding autonomy have been met with force and massive neo-Stalinist population transfers of Han Chinese into Tibet and Xinjiang.

Xi Jinping is no Mikhail Gorbachev. The people do not decide in his China. The party does. He does. He is more in the mold of the Leonid Brezhnev of 1968, who ordered Warsaw Pact tank armies in to put an end to the Prague Spring.

Hong Kong is also a microcosm of the world's ideological conflicts — between democracy and authoritarianism, pluralism and nationalism.

American elites may sing psalms to multiculturalism. But in China, on the 65th anniversary of the revolution where Mao declared, "China has stood up!" nationalism is surging.

China's claim to all the islands, shoals and rocks in the South China and East China seas, her warnings to Vietnam, Japan and the United States to stay clear, are cheered. Xi Jinping is seen as a nationalist and unyielding defender of China's historic rights.

Vladimir Putin, a Russian nationalist, is the most popular foreign leader in China for taking back Crimea after a U.S.-backed coup in Kiev.

Putin's campaign against NGOs in Moscow, which he sees as U.S.-financed centers of subversion, is being watched in Beijing, and similar charges are being made against U.S.-backed NGOs in Hong Kong.

Prime Minister Shinzo Abe has appealed to Japanese nationalism with his defense of the Senkakus against China and his call for the return of the southern Kuriles seized by Stalin at the end of World War II.

While Abe has suspended his visits to the Yasukuni Shrine to the spirits of Japanese warriors, including Hideki Tojo, his party members still make the visitations.

This week, President Obama hosted the new president of India, the hugely popular Hindu Nationalist Narendra Modi, who for a decade was denied admission to the U.S. for failing to halt a Muslim massacre in his home province of Gujarat.

The Arab Spring of 2011 has produced sectarian and civil wars, with Egypt, the largest Arab country, succumbing again to the rule of a soldier and authoritarian nationalist.

For the eighth year, Freedom House has reported a decline in freedom with "modern authoritarianism" a global growth stock.

Hong Kong may tell us which way the wind is blowing in the 21st century. Either the city is going to move toward a democratic future as the protesters demand, or it is going to be clasped more tightly to the bosom of the Motherland and absorbed into China.

And it is hard to be an optimist about the outcome of this struggle.

Consider this: For the Chinese Communists to adopt a U.S.-style Constitution would be suicidal. The people would use free speech to criticize and castigate the regime. They would use a free press to expose its incompetence, injustice and corruption. And they would use free elections to be rid of the regime and party.

Either democracy, or the Communist Party, has no future in China.

For they are irreconcilable, mutually exclusive. Democracy will either kill Communism, or the Chinese Communists will kill democracy.

Whatever happens in the short run in Hong Kong, that climactic battle is coming.