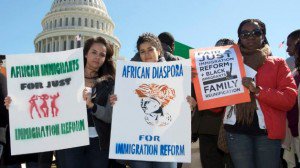 At this point it seems inevitable that America is going to have an Ebola experience on some scale. The Democrat-MSM complex is already moving to anathematize any discussion of the policy implications [Conservative Media Rush To Politicize First Case Of Ebola In U.S. by Alexandrea Boghun, MediaMatters, October 1, 2014] while the Conservatism Inc. outlets as far as I can see and notwithstanding the above are studiously confining themselves to medical and news-timing details.

So VDARE.com gets to state the key fact: America is at risk because of foolish and irresponsible immigration and refugee policies. If these were not so faulty, this risk would not be significant.

I commend for following this issue the marvelously industrious Refugee Resettlement Watch site.

Ann Corcoran's article Feds won’t say if Ebola patient is Liberian national But, the Liberian community of Dallas apparently thinks so , October 1, 2014 was posted on Refugee Resettlement Watch at a time when the authorities were displaying deplorable instincts by, incredibly, still trying to keep the identity and Liberian connection of the victim a secret.

“We need to know who it is so that they (family members) can all go get tested,...If they are aware, they should let us know.”

Corcoran opened this piece by saying

Reed was thrilled recently to get Obama to once again extend Temporary Protected Status for Liberians in America who were given TEMPORARY refugee status here over a decade ago for a civil war that ended in 2003 and who should have been sent back to Liberia by now. Kind of crazy that they can stay here longer due to Ebola back “home,” but it seems that we let their fellow Liberians just fly in for visits from West Africa?

Can you imagine what the medical treatment of this visitor is going to cost American taxpayers!

This links to Liberians can thank Ebola (and Senator Jack Reed) for extended stay in the US which quotes an AP story Gov't lets Liberians stay in US amid Ebola crisis, By Alicia A. Caldwell, September 26, 2014

Liberian immigrants living in the United States without a visa won't be sent back to the epicenter of Ebola crisis in West Africa for at least another two years, the Obama administration said Friday.

President Barack Obama signed a memo extending a legal protection called "deferred enforced departure" that continues a protection from deportation that has been in place for more than a decade.

It is a fixed Obamacrat policy to seize on any trouble in countries it favors as an excuse to give de facto Amnesty to any illegals from the place as I noted in Obama's Haitian Aid: Amnesty – and more immigration? January 16, 2010. Refugee Resettlement Watch’s archive on the Temporary Protected Status racket is here.

Meantime I see as so often Laura Ingraham has asked the key question:

Why did President Obama let Ebola in the United States?, LauraIngraham.com, October 1,2014

The Immigration and National Security Act makes clear that HHS has the authority to decide which diseases should be banned entry into our country. If the President wanted to ban people who are at risk of carrying Ebola, one option short of a total travel ban is to have HHS list Ebola as a banned disease, and then decree that people traveling from certain countries would have to prove that they are Ebola-free. This is what we do with TB and other diseases for immigrants – they have to bring in a statement from a certified doctor saying they do not have the disease. It’s not foolproof, but it works to a certain extent. So why didn't Obama take action to keep our citizens safe?

(No wonder Laura keeps getting excluded from major markets.)

My own question: why does America need immigration from this famously unhealthy part of the world anyway?