Buchanan To WSJ: It Wasn't Patriots Who Led GOP, America To Disaster—It Was You! 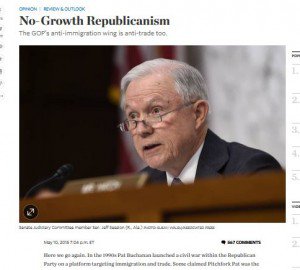 As Middle America rises in rage against "fast track" and the mammoth Obamatrade deal known as the Trans-Pacific Partnership, the Wall Street Journal has located the source of the malady.

"Here we go again. In the 1990s Pat Buchanan launched a civil war within the Republican Party on a platform targeting immigration and trade. Some claimed Pitchfork Pat was the future of the GOP, though in the end he mainly contributed to its presidential defeats."

But, woe is us, "the GOP's Buchanan wing is making a comeback."

Now it is true that, while Nixon and Reagan won 49-state landslides and gave the GOP five victories in six presidential contests, the party has fallen upon hard times. Only once since 1988 has a Republican presidential nominee won the popular vote.

But was this caused by following this writer's counsel? Or by the GOP listening to the deceptions of its Davos-Doha-WSJ wing?

In the 1990s, this writer and allies in both parties fought NAFTA, GATT and MFN for China. The WSJ and GOP establishment ran with Bill and Hillary and globalization. And the fruits of their victory?

Between 2000 and 2010, 55,000 U.S. factories closed and 5 million to 6 million manufacturing jobs disappeared. Columnist Terry Jeffrey writes that, since 1979, the year of maximum U.S. manufacturing employment, "The number of jobs in manufacturing has declined by 7,231,000—or 37 percent."

Does the Journal regard this gutting of the greatest industrial base the world had ever seen, which gave America an independence no republic had ever known, an acceptable price of its New World Order?

Beginning in 1991, traveling the country and visiting plant after plant that was shutting down or moving to Asia or Mexico, some of us warned that this economic treason against America's workers would bring about political retribution. And so it came to pass.

Since 1988, a free-trade Republican Party has not once won Pennsylvania, Michigan, Illinois or Wisconsin in a presidential election. Ohio, the other great Midwest industrial state, is tipping. The Reagan Democrats are gone. Who cast them aside? You or us?

Since the early 1990s, we have run $3 trillion to $4 trillion in trade deficits with China. Last year's was $325 billion, or twice China's defense budget. Are not all those factories, jobs, investment capital and consumer dollars pouring into China a reason why Beijing has been able to build mighty air and naval fleets, claim sovereignty over the South and East China seas, fortify reefs 1,000 miles south of Hainan Island, and tell the U.S. Navy to back off?

The WSJ accuses us of being anti-growth. But as trade surpluses add to a nation's GDP, trade deficits subtract from it. Does the WSJ think our $11 trillion in trade deficits since 1992 represents a pro-growth policy?

On immigration, this writer did campaign on securing the border in 1991-92, when there were 3 million illegal immigrants in the United States.

But the Bush Republicans refused to seal the border.

Now there are 11 million to 12 million illegal immigrants and the issue is tearing the party apart. Now everybody is for "secure borders."

We did urge a "moratorium" on legal immigration, such as America had from 1924 to 1965, to assimilate and Americanize the millions who had come. The WSJ Republicans called that xenophobia.

Since then, tens of millions of immigrants, here legally and illegally, mostly from the Third World, have arrived. Economically, they consume more in tax dollars than they contribute.

Politically, most belong to ethnic groups that vote between 70 and 90 percent Democratic. Their children will bury the GOP.

Consider California, which voted for Nixon all five times he was on a national ticket and for Reagan in landslides all four times he ran.

Since 1988, California has not gone Republican in a single presidential election. No Republican holds statewide office. Both U.S. Senators are Democrats. Democrats have 39 of 53 U.S. House seats. Republican state legislators are outnumbered 2-to-1.

Americans of European descent, who provide the GOP with 90 percent of its presidential vote, are down to 63 percent of the nation and falling.

Lest we forget, the "Buchanan wing" also opposed the invasion of Iraq while the WSJ-War Party wing howled, "Onto Baghdad!"

"Unpatriotic Conservatives," we were called in a cover story by a neocon National Review for saying the war was unnecessary and unwise.

Now, a dozen years after the "cakewalk" war, GOP candidates like Marco Rubio and Bush III are trying to figure out what it was all about, Alfie, and what they would have done, had they only known.

Our agenda in that decade was—stay out of wars that are not our business, economic patriotism, secure borders, and America first.

The foreign debt and de-industrialization of America, the trillion-dollar wars and the chaos of the Middle East, the shortened life span of the Party of Reagan, that's your doing, fellas, not ours.