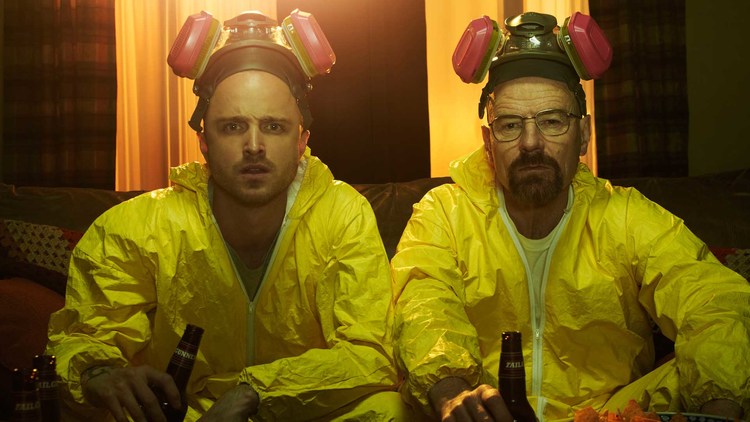 Creating drug dealers in New Mexico may lead to great television, but it shouldn't be a result of our immigration policy.

Breaking Bad, the story of a white chemistry teacher turned drug kingpin in New Mexico, came to an end last Sunday. The scribblers and chattering classes are obsessing over the show and its meaning, but continuing to avert their eyes from the actual casualties of drugs in New Mexico. Most importantly, they take care not to address what is really driving the death toll in the Land of Enchantment – mass immigration.

While Breaking Bad’s Walter White occasionally clashed with Mexican gangs on AMC, the real life penetration of the Mexican cartels into the United States is no fiction. New Mexico’s rate of drug overdose is higher than the national average – and many of the cartel's customers are teenagers. [The Heroin Surge | As addiction climbs in Albuquerque, cartels are ready to deliver, By Joe Kolb, Alibi.com, June 2 - 8, 2011 ]

New Mexico politicians are divided about how to respond. Rep. Emily Kane (D) proposed to reduce marijuana possession penalties but her bill was defeated in the Senate. However, the debate over liberalization of marijuana laws is irrelevant—youth in New Mexico are dying from hard drug use and overdoses that will continue as long as the borders remain open.

New Mexico has some of the highest national rates of cocaine and marijuana use for 12-17 year olds, according to New Mexico’s Department of Health. But the real problem drugs in the Southwest: heroin and prescription opiate painkillers. As a society, we are in a prescription drug abuse crisis, officially declared an epidemic by the Centers for Disease Control and Prevention in 2009.

Of course, Americans’ tendency to pop a pill to deal with the stresses of everyday life is not the fault of drug cartel. However, the National Survey on Drug Use and Health showed that one-third of people over twelve who used a controlled substance for the first time started off using a prescription drug non-medically. The leap to heroin from opiate painkillers in New Mexico is even more logical, given its low cost and easy availability.

The source of this cheap heroin: Mexico. Mike Gallagher, a journalist for the Albuquerque Journal, has spent his career investigating the New Mexican drug cartels and the substance abuse problems they have caused in Albuquerque. He has documented how the cartels market cheap, high-quality heroin to younger users, many from more affluent neighborhoods. [Deadly Addiction, August 12, 2012]

A recent undercover investigation by a federal task force outside a high school in the city found that a gram of heroin cost the same today as it did in 1977, that the purity was three or four times higher than it was ten years ago, and that heroin was cheaper than prescription opiates to buy on the street. Due to the purity level, consumers are able to smoke or snort it—fooling teenagers into believing that they are not addicts.

Heroin production is at an all-time high in Mexico. Most of it is smuggled over the border for American consumers. The final report published by the National Drug Intelligence Center in 2011 [PDF]reported that Mexican-based transnational criminal organizations control distribution of most of the heroin, marijuana and methamphetamine in the United States. The report further notes that foreign drug cartels are active in Las Cruces, Deming, Columbus and Albuquerque.

More alarmingly, it confirms that drug cartels are multitasking. Alien and weapon smuggling, kidnapping, and murder also fall under their purview.

Neighboring Arizona has recently cracked down on drug traffickers and alien smuggling. Unfortunately, this means New Mexico is likely to receive many of Arizona’s suppliers. The Drug Enforcement Administration of New Mexico notes in a recent report that the New Mexican/Mexican border is expansive and sparsely populated, making effective border patrol an arduous task at the best of times.

The Organ Mountains-Desert Peaks Wilderness Act (S. 1689) threatened to make this difficult task near impossible, by putting restrictions on how and where law enforcers can patrol the border. This bill died in the United States Senate. But it was New Mexico’s own former Democratic Senator Jeff Bingaman that introduced it. Bingaman sought to create political cover by simultaneously arguing for increased patrol agents and use of surveillance cameras at the border. Of course, as his bill wouldn't allow them to be used where they are needed, this would just be a waste of time.

Bingaman is no exception. New Mexican politicians at the federal level are no better than most in confronting mass immigration. Republican Steve Pearce is the only Representative out of the three from New Mexico who is even vaguely against amnesty. The other two Congressmen, Rep. Ben Luján and Rep. Michelle Lujan Grisham are members of the Hispanic Caucus and, needless to say, enthusiastic promoters of Amnesty. (Luján and Lujan Grisham are cousins, members of a New Mexico political dynasty, but Ben Luján insists on the accent over the á in Luján, a symbol of reverse assimilation.)

As New Mexico politicians are unwilling to stop drug smuggling if it means securing the border, they are seeking to dodge the issue by promoting decriminalization. Following the legalization of medical marijuana by the state government in 2007, there have been further moves towards decriminalizing pot. VDARE.com’s Brenda Walker, among others, has argued that legalizing marijuana could hurt the drug cartels.

However, this avoids the issue about what to do about hard drugs. Even a small step towards decriminalization is a high-risk strategy with respect to heroin. According to a leading authority on recovery centers in Albuquerque, Santa Fe and the rest of New Mexico, heroin is “incredibly dangerous”, and those who try it recreationally quickly develop a powerful addiction to it. It puts users at risk of contracting HIV and AIDS, and is “arguably one of the most destructive of all the illicit drug addictions”.

We also have the real world example of de facto heroin legalization in Italy. According to the National Center on Addiction and Substance Abuse at Columbia University, Italy has one of the highest rates of heroin addiction in the whole of Europe, and sixty-percent of AIDS cases are caused by intravenous drug use.

My view: politically and morally, legalization of hard drugs is a nonstarter.

New Mexico’s state government needs to acknowledge the elephant in the room. There's no alternative to confronting drug smuggling if the state wants to save lives. This means securing the border in order to secure New Mexico's own citizens.

Governor Susana Martinez recently proposed to revoke the driver’s licenses of illegal aliens. This is not nearly enough. Does she have the political courage to confront her own state's Amnesty caucus and demand common sense border protection?

The lives of New Mexico's youth depend on the answer.

Julie Davids is a freelance writer and full-time mom. After graduating college, she put a lot of effort into her career in various business ventures, but when motherhood came along, she decided it was time to pull back and take up her other passion, writing. Now she writes about finance, money and business and finds her work-life balance far more enjoyable.