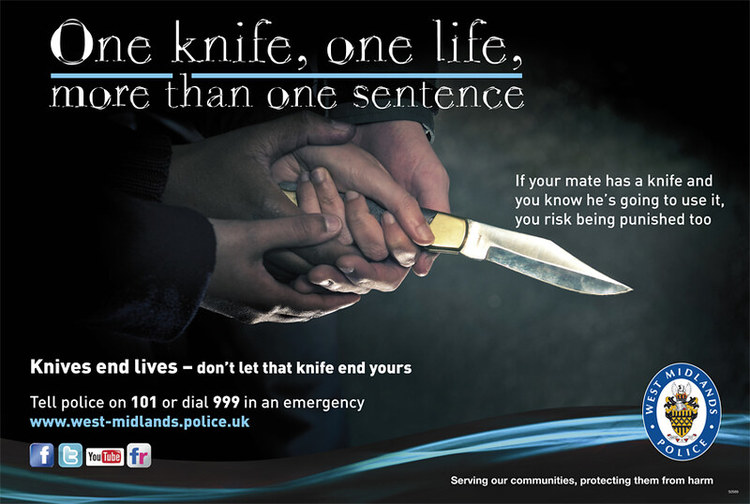 As Immigrant Crime Rises In Britain, The UK Government Is Trying To Ban Not Guns, But Knives

In a culture where the normal instinct of self-defense has been largely depressed by decades of liberal peacenik propaganda, mere gun grabbing (as Washington is now gearing up) will not suffice. British peace extremists may have imagined that depriving the people of firearms would ensure the end of violence in society, but something else happened on the rainbow road to kumbaya—the confiscation of guns from the British people over several decades did not result in perfect peacefulness.

Instead, the place of guns in violent crime has been replaced by knives in another brilliant example of failed social engineering from the left. British media is full of sensational headlines on the topic, e.g. Revealed: The truth about knife crime—it has soared by 35 per cent in some parts of Britain. The Daily Telegraph reported 400 victims of knife crimes each week in 2007. A bad guy so equipped is sometimes characterized as "knifeman" (like a gunman in a parallel social universe). Justice Minister Jack Straw remarked recently that improved statistics "underline our determination to tackle the scourge of knife crime."

In 2006, police offered an amnesty so people could turn in their... knives. The Home Secretary announced that "carrying knives on the street will not be tolerated." A photo from the campaign shows a few machetes and military-style knives collected, which were vaguely threatening in appearance.

Were Britons also expected to clear out anything pointy and sharp from their kitchen drawers? Perhaps the "bad" knives of the UK are like "assault" guns in this country, which are basic semi-automatics but with styling that frightens anti-gun legislators (like hypocrite Sen Dianne Feinstein, who has a permit to carry).

Of course, a knife is not an "equalizer" the way a gun is. Small persons can successfully defend themselves against much larger attackers with a firearm in hand. With knives, that is not necessarily the case.

Yes, the anti-knife arguments sound annoyingly like anti-gun rhetoric, and the propaganda is relentless...

Prime Minister Gordon Brown had strong statements last year about the need for Britain to reject self-defense as an unacceptable urge (rather than a basic human right):

'Young people are thinking it's acceptable, fashionable, necessary for them to protect themselves, to carry a knife,' said Brown who called for parents and community leaders to help get across the message that carrying a knife put people at greater danger of violence than not carrying one. Just like we made guns unacceptable, we should make knives unacceptable.

'You need, not just young people but parents and other people to say that knives in Britain, like guns, like bullying, like racism, all these things are unacceptable.' [...]

'There are certain boundaries in a decent society you don't cross and these boundaries are cultural. In America it is acceptable for many people to carry guns, it's not in Britain. We've got to make it as unacceptable to carry knives. Most decent people would want to do that and I think what you will see over the next few months is this sort of campaign, which is led not just by government but people in the country, to say "get knives off our streets".' [Rise up to curb knife culture, PM urges at book festival, Guardian, August 10, 2008].

Right, only primitive Americans have enough self-respect to carry firearms.

And after all the guns and knives have been removed from Britain, then what? Will scissors be next? What about screwdrivers, saws and cork-screws? (The tool section of hardware stores provides a broad array of possible weapons, incidentally.) At what point will Brown's "decent society" be deemed sufficiently pacified? It is difficult to understand how a nation is supposed to benefit when its people are unable to defend their lives and homes.

An old saying about guns might be revised like this: "When knives are outlawed, only outlaws will have knives." Either way, it means that disarming the law-abiding citizenry makes life a lot easier for would-be criminals.

Remarkably, a British retail chain has announced it will no longer sell knives:

"The East of England Co-operative Society said it will withdraw knives from sale in its 135 supermarkets and food stores and five petrol forecourt shops.

It hopes the decision will reduce the risk of knives "falling into the wrong hands" in the communities its stores serve." [Co-op announces ban on knives , by Anthony Bond, East Anglia Daily Times, March 9, 2009].

Apparently people are supposed to eat gruel and hand over any valuables to the first robber who happens by. If I were a criminal, I would certainly make my way immediately to the easy pickings of East Anglia.

The criminal element, whether diverse or home-grown, are often cowardly types who prefer victims who do not have the wherewithal to fight back.

Or gangsters may rely on having a huge numerical advantage, like the case of red-haired Henry Webster, 15, who was nearly killed in a savage attack by 13 "Asians" (UK MSM-speak for Muslims), who fractured his skull with a claw hammer:

"The attackers were sentenced to between eight months and eight years last year, but they would likely have got longer if the attack had been proven to be racist. [...]

Mrs Webster, 44, also believes the assault—by a gang calling themselves the Asian Invaders—was racist and the result of simmering tensions at the school.

She said: 'I have fought hard to find out all the facts. It has been an excruciating wait. The fact is that the attack on my son was a racial one.

'There have been numerous similar attacks before but nothing was ever done. I feel my son was badly failed by a school that believes racism is only something that is carried out by white pupils.'"  [Boy's fight to prove attack by Asian gang was racist, Daily Mail, Feb 23, 2009]

The whole thing stinks of fear on the part of authorities who don't want Muslim riots in their town. Mrs. Webster described a "culture of timidity" among teachers at the school who fear that disciplining young Muslim gangsters would bring accusations of racism.

In addition, the weak sentences, ranging from a few months to eight years, don't send a message of serious punishment for a crime that caused permanent brain injury to young Henry.

Sadly, the Websters are one family who now find it difficult to celebrate diversity.

And no matter whether the violent crime is done with a knife or a hammer or an illegal firearm, foreigners do more than their share, as reported in 2008 by the Telegraph: One murder in five is committed by a foreigner.

"One murder in five in England and Wales is committed by a foreigner, police figures released to The Sunday Telegraph show. [...]

Scotland Yard said half of the organised crime gangs in London were "ethnic"—bound by a common language or homeland. The most common nationalities for foreign killers were Pakistani, Indian and Jamaican. "

The article notes further that the foreign-born account for just six percent of the British population (for now).

However, the immigration spigot remains turned on high despite all the problems, even though England is already more densely populated than the Netherlands, which used to be Europe's most crowded country. In fact, the United Nations forecasts that the UK will surpass Germany as having the largest population in the EU by 2050. So Britain will be incredibly crowded as well as dangerously diverse.

On March 7, the Daily Telegraph described the upward trend of criminal activity by the non-British: Crime by foreigners doubles in five years.

"Records disclosed by 10 police forces reveal a 120 per cent rise in the number of non-Britons arrested, charged or convicted of offences between 2003 and 2008.

And figures from 20 forces, covering more than half the population of England and Wales, show that foreigners committed or were accused of more than 70,000 offences last year – pointing to a nationwide total of well over 100,000 offences if all 43 forces had provided figures. [...]

Sir Andrew Green, chairman of Migrationwatch, said: "These statistics are partial but they confirm a great deal of anecdotal evidence. I have lost count of the number of magistrates who have told me privately of their concerns about the high proportion of cases coming before them which involve immigrants." "

The article mentions that the statistics were obtained through the  UK Freedom of Information Act, strongly suggesting that the government doesn't want the people to know how permissive immigration has made their country far more hazardous, crime-wise.

The British example shows how far the liberal nanny-staters will go to enforce their idea of the ideal society by disarming and thereby endangering honest citizens who merely want to defend their lives and property. And it's not just loony left extremists proposing fanciful pacificism as a basis for public policy, but the current Prime Minister. Doubly alarming is how the people don't seem to mind being treated like children, incapable of managing sharp objects.

Will a black market in cutlery grow up on the island if more stores refuse to stock knives? The mind reels with the absurdity of a country so infantilized that everyday knives are considered too dangerous for the public.

Meanwhile, many in Obama's Washington are probably envious of the road taken by Britain. Attorney General Eric Holder has moved to curtail the Second Amendment because he believes Mexico's complaints that many guns used by drug cartel criminals come from the United States. There has been a media campaign on that talking point over the last couple weeks which serves two purposes. One, the presence of American guns will be part of Presidente Calderon's future excuse for his failure in Mexico's drug war. Two, it serves as an opening gambit for Obama's long-term anti-gun strategy. We can't let it happen.

The rapid British slide to infantile nanny-statism should be a galvanizing reminder that gun rights are human rights, and must be defended as passionately as borders and sovereignty.

Brenda Walker (email her) lives in Northern California and publishes two websites, LimitsToGrowth.org and ImmigrationsHumanCost.org. A great admirer of Theodore Roosevelt, she agrees with his sentiment, "Let us speak courteously, deal fairly, and keep ourselves armed and ready."