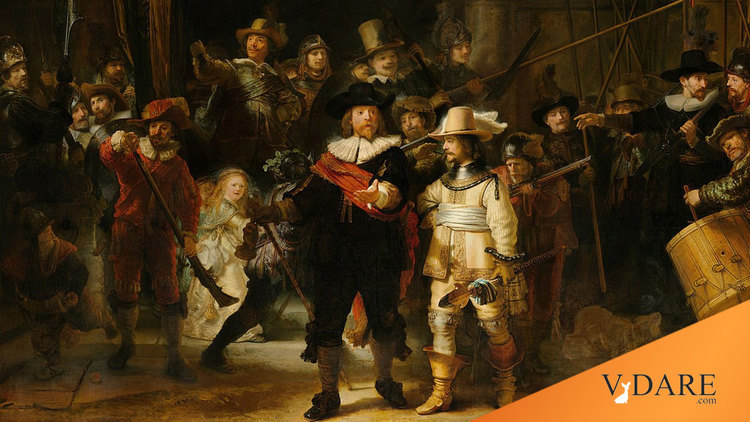 It's fun to discuss which groups of people are and aren't creative, but it's worth noting that this often changes over time. For example, here are a couple of graphs I created from the database Charles Murray compiled for his 2003 book Human Accomplishment.

Here, I've plotted the "eminence" of scientists and artists working in the Netherlands between 1400 and 1950. Eminence is defined by attention paid to individuals in a wide selection of standard reference works by leading scholars in each field, on a 0 to 100 scale, with the top figure in each field being set at 100. For example, the highest point on this chart is Rembrandt, who "flourished" (i.e., was 40 years old) in 1646. Across about a dozen art history reference and textbook volumes, Rembrandt has 56.3% as much attention devoted to him as the top ranking figure in "Western Art," who is, unsurprisingly, Michelangelo.

The point of course is not to argue whether Rembrandt was really 46.3% or 66.3% as eminent as Michelangelo.

The point is to have an objective, disinterested tool for answering other questions, such as: Were artists and scientists working in the Netherlands equally eminent over time? (The database is "disinterested" in both the correct and vulgar senses of the word, in that neither the historians who wrote the reference books nor Murray who tabulated them were not particularly interested in this question.)

The answer is clearly: No.

Just like everybody says, the Netherlands enjoyed a Golden Age in the middle of the 17th Century: Rembrandt, Huygens, Vermeer, Hals, Van Ruisdael, Spinoza, van Leeuwenhoek, Swammerdam, and so forth. And there are a bunch of Europeans who moved about who arguably did their best work in the Netherlands, so Murray as classifying them as "Worked In" the Netherlands, such as Descartes (who said he got a lot of work done there because everybody in Holland was too concerned with making money to pester him).

I don't know why the Netherlands declined in creativity in the late 17th Century. Perhaps it's due to the war of 1672.  Wikipedia  says:

1672 is known in the Netherlands as the "Disastrous Year" (Rampjaar). England declared war on the Republic, (the  Third Anglo-Dutch War), followed by  France,  M??nster  and  Cologne, which had all signed alliances against the Republic.

Eventually the prosperity of Holland became self-defeating: its covetous neighbors were finally moved to use force to acquire some of it for themselves. Toward the end of the age, the English wrested control of the seas from the Dutch Navy and in 1672 French troops overran most of the northern provinces. In a new era of surging nationalism, Holland was too small to maintain its dominant position. The merchants lost their daring; prosperity induced lethargy; godliness became self-righteousness. A long period of stagnation followed far Holland, and its art languished along with it.

Vermeer's career, for instance, was ruined by the war of 1672 and he died three years later in his early 40s. His widow, with 11 children, had to declare bankruptcy, and van Leeuwenhoek became the family's trustee.

Still, it's not clear if purely material explanations suffice.

Whatever the reason for the decline of creativity in the Netherlands, few famous artists and scientists flourished there from 1750-1850. Yet, in 1850-1950 (the end of Murray's survey), the population's individual accomplishments rebounded, with a Silver Age of Van Gogh, Mondrian, and a whole bunch of scientists.

The reason eminence can be reasonably assumed to be correlated with creativity is that both are measures of influence. Historians of the arts and sciences are trying to create narratives of Who Influenced Whom, as I explained at some length in my  American Conservative  review  of  Human Accomplishment.