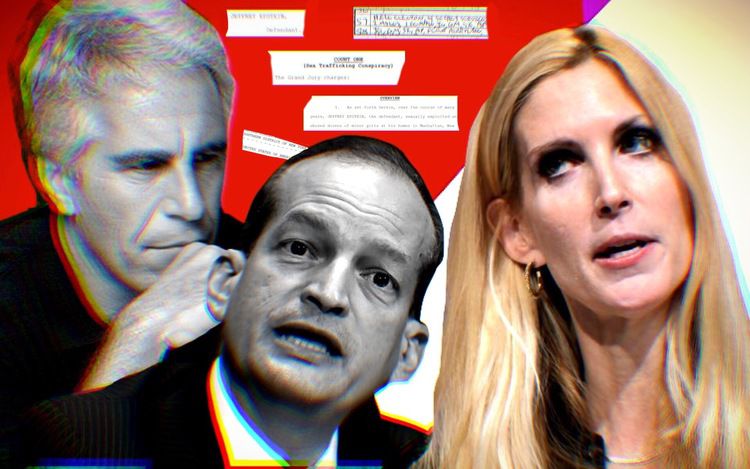 Ann Coulter On Epstein: Get Acosta! But Get The Right Guy, Too

Now that the media is finally, at long last, interested in the 2006 Jeffrey Epstein child sex case, perhaps we can get an answer to the most intriguing question: Why does he keep escaping justice on essentially the same child molestation charges?

The only reason for the media’s flood-the-zone coverage of Epstein—13 years late—is that they think they’ve found a Trump connection. Oh happy day. (Trump was friendly with Epstein 15 years ago—before banning him from Mar-a-Lago for life after he hit on a young girl working there.)

The main hook is: Trump’s Labor secretary, Alex Acosta, accepted a disreputable plea deal with Epstein while serving as a U.S. attorney under President Bush. If fixating on Acosta is what it takes to keep this case from being brushed under the rug (again), then I guess you can have him.

But just between us, Acosta's not the real villain.

It’s easy to forget, but Epstein’s arrest this week marks the third attempted prosecution of him for sex with underage girls.

It’s certainly been easy for the media to forget! In The New York Times’ version of events—and that of every other news outlet—the Palm Beach police discovered Epstein was paying minor girls from West Palm Beach for sex ... and then took the case straight to the FBI!

That seems odd: Why wouldn’t police bring their case to the local prosecutor, who was overseeing the investigation and issuing subpoenas?

Unfortunately, the local prosecutor in this case was a sleazebag, activist Democrat named Barry Krischer.

When Krischer, then Palm Beach state attorney, found out the target was Epstein, a big Democratic donor, he refused to prosecute. It was only because of Krischer’s active obstruction of the case that the Palm Beach chief of police, Michael Reiter, begged the FBI to intervene.

Acosta may have buckled in the end, but at the time, he was a knight in shining armor rushing in after Krischer killed the case.

Pretty much everything we know about Epstein’s (alleged) molestation of minors is known because of the original 11-month investigation by the Palm Beach police, tied up in a bow and handed to Krischer in 2006.

The police had sworn statements from dozens of witnesses, including five underage girls who said they’d been paid to engage in sex acts with Epstein, as well as statements from 17 other witnesses.

One of Epstein’s procurers, 20-year-old Haley Robson, told the police she had first met Epstein when she was 17 years old—18 is the age of consent in Florida—and he paid her to give him a naked massage, whereupon he sexually assaulted her.

Robson said she’d brought at least six minor girls to Epstein, and they’d been paid $200 to $1,000 apiece for naked massages and sex acts. “The more you do, the more you get paid,” one of Epstein’s assistants told a girl in a phone call tape-recorded by the police.

Combing through Epstein’s garbage, the police found papers with names and phone numbers, sex toys and thong panties. They found phone messages from girls saying they couldn’t come over because of “soccer practice,” and offering to come over “Monday after school.”

The girls cried as they told police of their repulsion at Epstein’s “egg-shaped penis,” how they averted their eyes and kept watching the clock, waiting for it to be over, so they could get paid and leave.

Chief Reiter presented all this to Barry Krischer in early 2006, along with a probable cause affidavit charging Epstein and two of his assistants with multiple counts of unlawful sex acts with a minor.

According to Chief Reiter’s sworn testimony, during the investigation, he routinely updated Krischer, without mentioning Epstein’s name. Krischer was gung-ho about the case, saying: “This is somebody we have to stop."

But as soon as Krischer found out the perp was Jeffrey Epstein, his “tone and tenor” about the case “changed completely.” Why, the girls’ MySpace pages reference marijuana and alcohol use! I couldn’t possibly take this case to a jury!

So instead of charging Epstein, Krischer took the highly unusual step of presenting the case to a grand jury (a trick Florida prosecutors use when they don’t want an indictment, but want it to look like they tried).

I wasn’t there for his presentation, but I get the feeling Barry just didn’t have his heart in it. The jurors returned an indictment on only a single count, “solicitation of prostitution”—despite what I’m sure was Krischer’s very best effort!

Nothing about molestation of minors. Nothing about lewd and lascivious conduct with minors. And for his co-conspirators—nothing at all.

So what did Epstein get as his sentence? Probation. Sweet feathery Jesus. An actual slap on the wrist would have been harsher.

1) The case against Epstein is no stronger today than it was in 2006—yet when the story broke, there was virtually zero national coverage. According to Nexis, throughout all of 2006, only a few news outlets outside of Palm Beach even mentioned the case. There was an opening segment on Fox News’ "O’Reilly Factor," a few items in The New York Post and Florida papers, followed months later by a Page-19 story in the Times.[Questions of Preferential Treatment Are Raised in Florida Sex Case, by Abby Goodnough, September 3, 2006 ]

Instead of getting on their high horses about Acosta, maybe the media should look at themselves.

2) The deal Acosta’s office struck with Epstein required him to plead guilty to state crimes—no federal offenses at all. Why? Because sex with underage girls is a state crime, but the state attorney refused to prosecute. Acosta came in like Elliot Ness trying to get Al Capone on a tax charge. Then he blew it. Fine, I agree.

But how on earth has Krischer emerged smelling like a rose? He’s the one who engineered the main cover-up! According to Chief Reiter, Krischer seemed to be protecting Epstein. Are Epstein’s powerful friends rewarding him with a cloak of invisibility?

3) Without Acosta stepping in to at least try to clean up after Krischer, Epstein never would have served a single day in jail. (Inasmuch as Epstein pleaded to state crimes, the ridiculously lenient terms of his confinement—endlessly cited in the press—were the purview of local authorities and completely out of Acosta’s hands.)

He never would have had to register as a sex offender.

He never would have been required to pay the victims a cent in restitution.

Yet Acosta is treated as the only villain in this case. Where is Krischer?

He’s still a member in good standing of the Florida bar. Last December, Krischer [Email him] was honored by the Anti-Defamation League for making “an outstanding contribution to the legal profession and to the community at large, while exemplifying the principles upon which [the ADL] was founded.” (By the way, Barry, a belated mazel tov!)

Based on this history, I have to assume the SDNY will take a dive, too, and will be showered with awards for doing so.

But just so you know, that isn’t the whole story.