When MSNBC signed off at 3 a.m. the first night of the Republican National Convention, they were still talking about Melania's speech.

For five solid hours, MSNBC had been obsessing over two paragraphs of Melania Trump's speech that were nearly identical to Michelle Obama's 2008 convention speech.

The similar passages were: 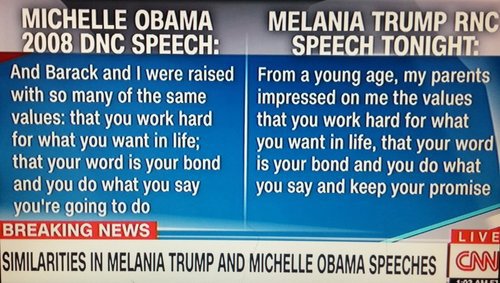 MSNBC covered the banal sayings as if Melania had been caught selling secrets to the Soviets. All night, commentators somberly intoned, It's essential that the campaign get out in front of this. Trump needs to apologize ... Now is the time for him to demonstrate crisis management skills—and this IS a bona fide crisis.

The network presented a split screen presentation of the two paragraphs next to each other, with a color-coded bar showing when the plagiarism becomes more intense. Hosts read the corresponding parts of the speeches over and over again. Lawrence O'Donnell pronounced: "This is serious." 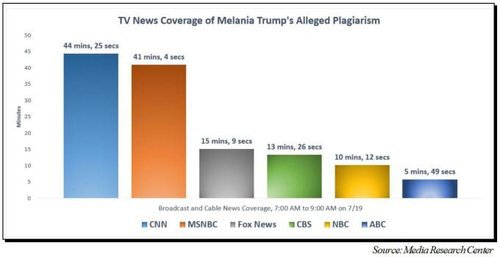 If you're on MSNBC and traffic in outrage and sanctimony every day, you can lose your bearings and not even realize what an idiot you've become.

MSNBC called in experts from various fields—a linguist from MIT, a psychiatrist specializing in pathological self-destructive impulses—and now, let's go to Jacques Truffaut in Paris! Well, Brian, the French here are just getting a translation of the speech as we speak, and I can tell you they are shocked.

(Yes, the moderator for MSNBC's hysterical coverage of Melania's "plagiarism" was Brian Williams, who must have been trying to quietly excuse himself from someone else's embarrassing verbal blunders.)

Not one single person on MSNBC said, "Yeah, um, can we talk about something else because this is so lame and trivial, we risk looking like sissies."

Huffington Post, Gawker and Jezebel pulled all-nighters to hoot and sneer at the prospective first lady's speech. The following day, Andrea Mitchell devoted half her show to Melania's "plagiarism."

In a few days, we'll be seeing, DAY 5: NO APOLOGY FOR PLAGIARIZED PARAGRAPH!

Listen to yourselves, MSNBC! Your obsession with the "theft" of these saccharine sentiments only reminds people how trite Michelle Obama's speech was. (Which you adored.)

More shocking than the fact that Melania used some of the same expressions from Michelle's speech is that someone heard these hackneyed phrases and said, "I KNOW EXACTLY WHERE I'VE HEARD THAT BEFORE!" Haven't you heard these platitudes a thousand times before?

Kids spend half the day affirming how special they are. I am somebody! I can do anything! The world is my oyster!

Personally, I think it's a creepy and cynical thing to do. We ought to be honest with people. You can do some things and have a happy life, but there are other things you probably can't do. Most of you are never going to be a nuclear scientist, an NFL quarterback or a dancer with the Joffrey Ballet.

No one wants to state the obvious because it involves making fun of both Melania and Michelle, but the fact is: It's impossible to "plagiarize" meaningless twaddle.

Obviously, Melania's speechwriter didn't think up those words—and neither did Michelle's. You can hear the same thing at any third-rate college commencement, at Orientation Day at Excel academies, at motivational speakers' corporate events, and right now, in the greeting card aisle of your local Rite Aid.

Not even Hallmark cards could claim authorship because there were probably caveman drawings with rainbows that said, "You can achieve anything you set your mind to!"

But if I say: "The only limit to your achievement is your dreams!" no one can claim the rights to those words because they're insipid nothings.

No one invented "the only limit to your achievements is the strength of your dreams," anymore than I invented "Hey—how you doing?" There's nothing there! These are phrases designed to allow you to make sounds while moving your mouth.

People who wanted to hate Melania thought her speech was godawful, and the ones who like her thought it was awesome and are now requesting copies of the speech to use at the office.

But all that actually happened was: Melania Trump gave a typical first lady speech.

Some people like this stuff. There's a reason we have a greeting card business.

The media wanted a catastrophe the first night of the Republican National Convention because they'd already written the chyrons for it. Unfortunately, the fact that Melania gave a typically banal first lady speech was the best they got, so MSNBC just powered through with "an attitude of gratitude" realizing that "satisfaction lies in the effort, not in the attainment." I wrote those myself.